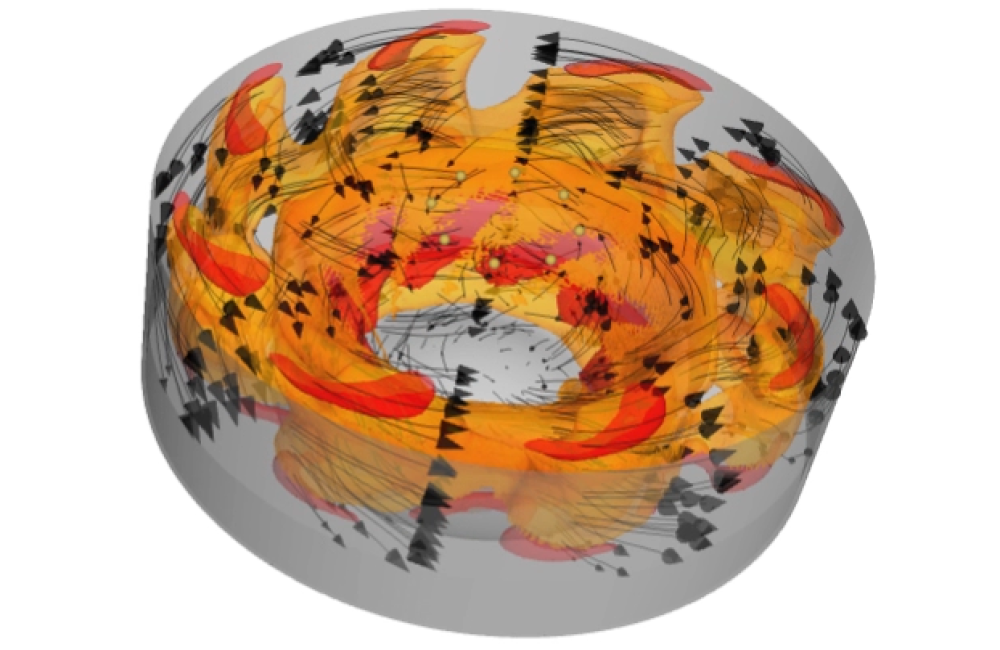 View a hi-res version of this image
In a model of a 1.6 liter engine cylinder, liquid fuel (shown in red and orange) is converted to fuel vapor under high temperatures during ignition. Image courtesy of Ronald Grover.

February 8, 2018 – Most car owners in the United States do not think twice about passing over the diesel pump at the gas station. Instead, diesel fuel mostly powers our shipping trucks, boats, buses, and generators—and that is because diesel engines are about 10 percent more fuel-efficient than gasoline, saving companies money transporting large deliveries.

The downside to diesel engines is that they produce more emissions, like soot and nitrogen oxides, than gasoline engines because of how they combust fuel and air. A gasoline engine uses a spark plug to ignite a fuel-air mixture. A diesel engine compresses air until it is hot enough to ignite diesel fuel sprayed into the cylinder, using more air than necessary to burn all the fuel in a process called lean mixing-controlled combustion.

“We can generally clean up emissions for a gasoline engine with a three-way catalyst,” said Ronald Grover, staff researcher at General Motors (GM) Research and Development. “The problem with diesel is that when you operate lean, you can’t use the conventional three-way catalysts to clean up all the emissions suitably, so you have to add a lot of complexity to the after-treatment system.”

A multinational corporation that delivered 10 million vehicles to market last year, GM runs its research side of the house, Global R&D Laboratories, to develop new technologies for engines and powertrains.

“We work from a clean sheet of paper, asking ‘What if?’” Grover said. From there, ideas move up to advanced engineering, then to product organization where technology is vetted before it goes into the production pipeline.

For every engine design, GM must balance cost and performance for customers while working within the constraints of emissions regulations. The company also strives to develop exciting new ideas.

“The customer is our compass. We’re always trying to design and improve the engine,” Grover said. “We see constraint, and we’re trying to push that boundary.”

But testing innovative engine designs can run up a huge bill.

Meanwhile, competitors might put their own new designs on the market. To reduce R&D costs, automakers use virtual engine models to computationally simulate and calibrate, or adjust, new designs so that only the best designs are built as prototypes for testing in the real world.

Central to engine design is the combustion process, but studying the intricacies of combustion in a laboratory is difficult and significant computational resources are required to simulate it in a virtual environment.

Combustion is critical to drivability and ensuring seamless operation on the road, but combustion also affects emissions production because emissions are chemical byproducts of combustion’s main ingredients: fuel, air, and heat.

“There are hundreds of thousands of chemical species [types of molecules] to be measured that you have to track and tens of thousands of reactions that you need to simulate,” Grover said. “We have to simplify the chemistry to the point that we can handle it for computational modeling, and to simplify it, sometimes you have to make assumptions. So sometimes we find the model works well in some areas and doesn’t work well in others.”

The combustion process in a car engine—from burning the first drop of fuel to emitting the last discharge of exhaust—can create many thousands of chemical species, including regulated emissions. However, sensors used in experimental testing allow researchers to track only a limited number of species over the combustion process.

“You’re missing a lot of detail in the middle,” Grover said.

Grover’s team wanted to increase the number of species to better understand the chemical reactions taking place during combustion, but in-house computational resources could not compute such complex chemical changes with high accuracy within a reasonable time frame.

“It took 15 days just to compute 150 crank angle degrees. So, we didn’t even finish the calculation in over 2 weeks,” he said. “But we still wanted to model the highest fidelity chemistry package that we could.”

To reduce computing time while increasing the complexity of the chemistry calculations, the GM team would need an extremely powerful computer and a new approach.

A richer recipe for combustion

Grover and the GM team turned to DOE for assistance. Through DOE’s Advanced Scientific Computing Research Leadership Computing Challenge, a competitive peer-reviewed program, they successfully applied for and were awarded time on Titan during 2015 and 2016.

A 27-petaflop Cray XK7 supercomputer with a hybrid CPU–GPU architecture, Titan is the nation’s most powerful computer for open scientific research. To make the most of the computing allocation, Grover’s team worked with Dean Edwards and Charles Finney at ORNL’s National Transportation Research Center and Wael Elwasif of ORNL’s Computer Science and Mathematics Division to optimize combustion models for Titan’s architecture and add chemical species. They also partnered with Russell Whitesides at DOE’s Lawrence Livermore National Laboratory. Whitesides is a developer of a chemical-kinetics solver called Zero-RK, which can use GPUs to accelerate computations. Both the ORNL and LLNL efforts are funded by DOE’s Vehicle Technologies Office.

The GM team set out to accomplish three things: use Titan’s GPUs so they could increase the complexity of the chemistry in their combustion models, compare the results of Titan simulations with GM experimental data to measure accuracy, and identify other areas for improvement in the combustion model.

“Their goal was to be able to better simulate what actually happens in the engine,” said Edwards, the ORNL principal investigator.

ORNL’s goal was to help the GM team improve the accuracy of the combustion model, an exercise that could benefit other combustion research down the road. “The first step was to improve the emissions predictions by adding detail back into the simulation,” Edwards said.

“And the bigger the recipe, the longer it takes the computer to solve it,” Finney said.

This was also a computationally daunting step because chemistry does not happen in a vacuum.

The combustion model also needed to accurately simulate the many different operating conditions created in the engine. To simulate combustion under realistic conditions, GM brought experimental data for about 600 operating conditions—points measuring the balance of engine load (a measure of work output from the engine) and engine speed (revolutions per minute) that mimic realistic driving conditions in which a driver is braking, accelerating, driving uphill or downhill, idling in traffic, and more.

“On Titan, we almost tripled our number of species,” Grover said. “We found that by using the Zero-RK GPU solver for chemistry, the chemistry computations ran about 33 percent faster.”

These encouraging results led the team to increase the number of chemical species to 766. What had taken the team over 2 weeks to do in-house—modeling 766 species across 150 crank angle degrees—was completed in 5 days on Titan.

In addition, the team was able to complete the calculations over the desired 280 crank angle degrees, something that wasn’t possible using in-house resources.

“We gathered a lot of success here,” Grover said.

With the first objective met—to see if they could increase simulation detail within a manageable compute time by using Titan’s GPUs—they moved on to compare accuracy against the experimental data.

They measured emissions including nitrogen oxides, carbon monoxide, soot, and unburned hydrocarbons (fuel that did not burn completely).

“Nitrogen oxide emissions in particular are tied to temperature and how a diesel engine combustion system operates,” Edwards said. “Diesel engines tend to operate at high temperatures and create a lot of nitrogen oxides.”

“That was one of our objectives: Can we model bigger chemistry and learn anything? Yes, we can,” Grover said, noting that the team saw some improvements for soot predictions as well but still struggled with increasing predictive accuracy for carbon monoxide and unburned hydrocarbon emissions.

“That’s not a bad result because we were able to see that maybe there’s something we’re missing other than chemistry,” Grover said.

To determine what that something missing might be, Grover and the GM team successfully competed for a new ALCC award. The successful partnership with researchers at ORNL and LLNL and the DOE VTO and ASCR programs will continue to utilize Titan’s GPUs to study the effect of heat transfer and combustion chamber wall temperatures on the formation and oxidation of emissions species.

“We need to spend more time evaluating the validity of those wall temperatures,” Grover said. “We’re actually going to compute the wall temperatures by simulating the effect of the coolant flow around the engine. We’re hoping better heat transfer predictions will give us a big jump in combination with better chemistry.”

Another result was the demonstration of the GPUs’ ability to solve new problems.

The parallelism boosted by Titan’s GPUs enabled the throughput necessary to calculate hundreds of chemical species across hundreds of operating points. “Applying GPUs for computer-aided engineering could open up another benefit,” Grover said.

If GPUs can help reduce design time, that could boost business.

“That’s faster designs to market,” Grover said. “Usually a company will go through a vehicle development process from end-to-end that could take 4 or 5 years. If you could develop the powertrain faster, then you could get cars to market faster and more reliably.” 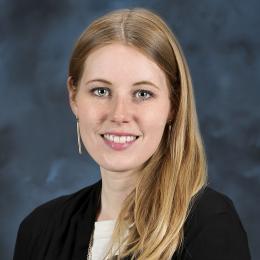 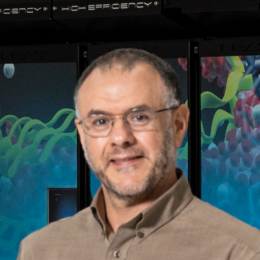 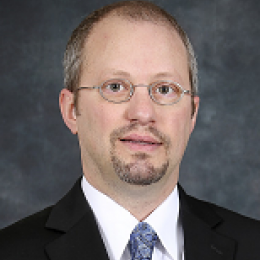