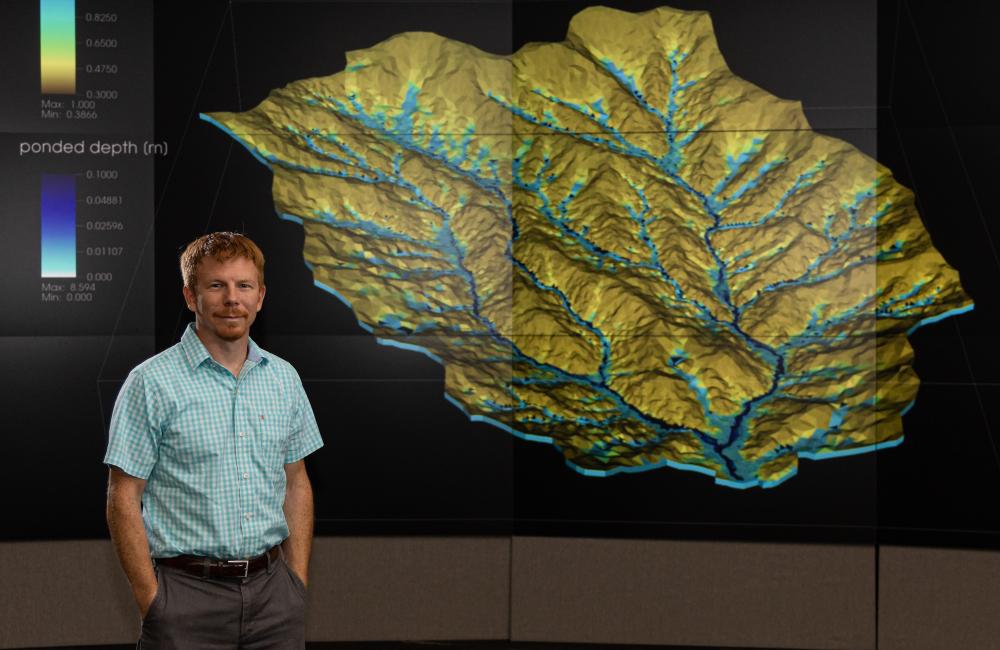 Ethan Coon uses math and computational science to model the flow of above and belowground water in watersheds.

As a computational hydrologist at Oak Ridge National Laboratory, Ethan Coon combines his talent for math with his love of coding to solve big science questions about water quality, water availability for energy production, climate change, and the movement of contaminants through watersheds.

Coon creates numerical tools and software platforms for modeling and simulation experiments. His work facilitates a range of studies examining how water moves through ecosystems, both aboveground and below. He spends much of his time tailoring his code to answer a variety of scientific questions brought forward by research groups across several national laboratories.

“The national labs encourage the types of big projects and collaborations that fit well for somebody like me who brings a set of tools and wants to apply it to a question,” Coon said. “I enjoy working with other people to solve complex problems.”

Coding the physics of Arctic ice and soil

Understanding the processes at work in the changing ecosystem of the Alaskan tundra for the Next-Generation Ecosystem Experiments (NGEE) Arctic project is just the type of multifaceted challenge that Coon relishes. It was the need to create code that would represent complicated ice and soil physics—like how the melting and refreezing of water can move soil around and transform or deform landscapes—that inspired Coon and collaborators to create the framework that diverse research groups use today: the Advanced Terrestrial Simulator, or ATS.

ATS allows scientists to experiment with adding or removing processes from a simulation in order to study the effects, such as determining how sensitive water uptake in plants is to a particular process. These plug-and-play thought experiments direct scientists’ efforts by showing which factors are critical to measure and incorporate into studies, a compelling capability that helps scientists refine and accelerate their work.

The sheer complexity of nature can be overwhelming, but Coon says that his models are not meant to capture every nuance.

The goal of these models isn’t to reproduce reality most of the time,” Coon said. “It’s to capture the important parts of reality.

Researchers are adopting the ATS framework for a range of projects, including examining changing water exports from Arctic river basins and looking at the interaction of water with mercury-laden riverbanks through tracer experiments.

Coon’s current work focuses on translating ATS into a new form compatible with exascale computing. This shift is driven, in part, by the need for more computing power to handle the big data used in these models. Dubbed ExaSheds for its combination of exascale and watersheds, the project aims to rethink the way ATS works to leverage high-performance, GPU-driven computing to solve questions of watershed dynamics.

To achieve this, Coon and his colleagues are integrating machine learning—computational analysis methods that automate the formation of a data model—into the ATS framework. The idea is to solve the physics on the most important sections of a watershed, a specific sub-basin, for instance, and use machine learning to discover the differences between that sub-basin and all the similar ones under study.

He is also working on a laboratory-funded project exploring how to bridge his regional and local models with other simulations to develop an understanding of natural systems across scales, from nanoscale environments to planet-wide processes.

The movement of water is critical across all scales. “Whether you’re looking at the carbon cycle, biogeochemical cycles, or vegetation, everything is happening on the backbone of water,” Coon said. “You can’t get any of those things right until you get the water right.”

Going with the flow

Coon grew up in a family of mathematicians and always had an interest in using the discipline as a tool to solve complex challenges. He first got his “toes wet” modeling subsurface flows as a postdoctoral researcher at Los Alamos National Laboratory (LANL), where he explored the possibility of trapping carbon dioxide in brine in old oil wells.

He had spent the previous summer at LANL as a DOE Computational Science Graduate Fellow while working toward his doctorate in applied mathematics at Columbia University. His doctoral thesis focused on earthquake modeling, using mathematical methods to understand fault networks.

Coon’s connection to earth science started in graduate school with his desire to use math to address important problems. He picked Columbia University, in part, for its connection to the Lamont Doherty Earth Observatory, as Coon was interested in environmental and climate science. His education at the School of Engineering equipped him with a keen understanding of the physics and fluid dynamics underpinning the models he creates.

It was during his time as a postdoc and later as a staff scientist at LANL that Coon developed the ATS framework that still drives his work today. He joined the Terrestrial Systems Modeling group and the Climate Change Science Institute at ORNL in 2017 as his wife, Christa Brelsford, accepted a Liane Russell Fellowship at the laboratory.

Together, they have two young children with another on the way. In their spare time, the family enjoys exploring the outdoors. Coon often sees things on nature hikes that connect with his models.

“My models operate on a scale that I can see,” Coon said. “I can walk around and see how that would fit into my code. It has changed the way I see nature.”

UT-Battelle manages ORNL for DOE’s Office of Science. The Office of Science is the single largest supporter of basic research in the physical sciences in the United States, and is working to address some of the most pressing challenges of our time. For more information, please visit https://energy.gov/science. 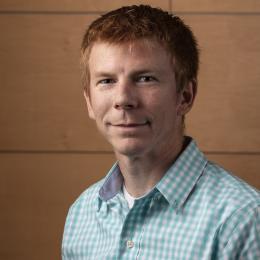