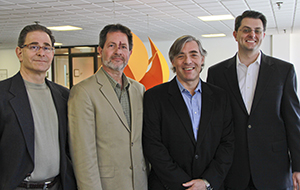 March 27, 2015 — Nearly a decade ago, a meeting to explore research collaborations between the Department of Energy’s Oak Ridge National Laboratory and the University of Tennessee set the foundation for a company that provides accessible and remote health screenings for patients concerned about diabetic related eye diseases.

That start-up company—launched as AMDx, then called Hubble Telemedical—has been acquired by Welch Allyn, a major medical diagnostic devices manufacturing company that plans to bring the ORNL-UT breakthrough to many more patients.

“There are about 30 million diabetic patients in the U.S. today, and that number is growing. Diabetes is a worldwide epidemic," says Tobin, the director of ORNL’s Electrical and Electronics Systems Research Division.

“Maybe half of these people are getting their eyes screened for diabetic related diseases,” he says. “Mostly that’s because of the lack of easy access to the healthcare community.”

In the U.S., Tobin says that equates to about 400,000 patients a week missing out on screenings for eye diseases related to diabetes who might otherwise receive a diagnosis and treatment plan that could help save their sight.

“If you catch diabetic retinopathy early, it can be treated,” Tobin says.

Diabetic retinopathy is Hubble Telemedical’s central focus. The disease—caused by retinal blood vessel damage—is the most common diabetic eye disease and a leading cause of blindness in adults in the United States.

The tool securely passes patient data and images over the Internet for remote analysis by a physician. Physicians can give an expert opinion remotely and in real-time, and in doing so, open the door for diabetes-related eye disease screening in settings where a professional eye doctor might not be on hand.

“Normally, these clinics wouldn’t have done diabetic screening because of the need for an optometrist or ophthalmologist to be on staff, but this technology can help bring these services into nontraditional care venues for diabetic eye diseases,” Tobin says.

Hubble Telemedical also makes its service available to health care providers to help them improve scores on the Health Effective Data and Information Set, a tool that is used by many health plans to measure care and service performance.

“The technology benefits the patients, payers and providers,” Tobin says. “It’s been a positive experience all around.”

The ORNL seed money program and the National Institutes of Health provided initial funding for research that led to the formation of Hubble Telemedical.