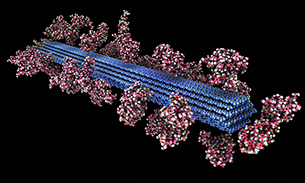 Computer simulations are revealing the biological barriers that prevent the conversion of biomass into energy.

A team led by Oak Ridge National Laboratory’s Jeremy Smith, the director of ORNL’s Center for Molecular Biophysics and a Governor’s Chair at the University of Tennessee, has uncovered information that could help others harvest energy from plant mass. The team’s conclusion—that less ordered cellulose fibers bind less lignin—was published in the August edition of Biomacromolecules.

The team used simulations on the Oak Ridge Leadership Computing Facility’s Jaguar supercomputer—a 2.3-petaflop machine that in 2012 morphed into Titan, which is a more than 27-petaflop supercomputer—along with neutron scattering to seek ways to make ethanol as cheap as gasoline at the pump.

“We are trying to figure out how to effectively break down plant materials like grass or wood chips cheaply enough to make biofuels economically viable,” said Loukas Petridis, a researcher in the Biosciences Division. “We are investigating the two main features that make biomass recalcitrant, or resistant to breakdown—the presence of lignin and the tightly ordered structure of cellulose.”

All plants contain a sticky molecule called lignin that intertwines with cellulose and hemicellulose in their cell walls. This substance is one of the major roadblocks preventing the cost-effective production of cellulosic ethanol.

Lignin is a plant cell’s first defense against man and beast. It provides strength to the stalks of plants so that these organisms can stand. But a plant’s best friend is a bioenergy researcher’s worst nightmare. During biofuel production—a process that converts plant mass into alcohol—lignin blocks enzymes from breaking down cellulose into the sugars necessary for fermentation.

Petridis works with ORNL’s Biofuels Science Focus Area, a multidisciplinary research group with experts in math, computer science, physics, chemistry, and biology who are working on the lignin problem. By studying lignin–cellulose and lignin–lignin interactions, the scientists have learned more about the physical processes that occur during biomass pretreatment, which is an expensive process that opens plant cell walls and helps enzymes break down plant mass.

“The process is very effective,” Petridis said. “Without it you wouldn’t be able to produce biofuels, but we want to improve it further so that the production of biofuels becomes cheaper and more efficient. In order to do this, we have to understand what is taking place during pretreatment on a molecular level.”

Combining the powers of neutrons and simulations

Neutron imaging and supercomputer simulation allow scientists to resolve the structure of lignin aggregates down to 1 angstrom, about 1 million times smaller than what the naked eye can see.

A previous simulation on Jaguar showed how different pretreatment temperatures change lignin’s structure, causing it to either aggregate or expand. Petridis’s study builds on this finding.

Using neutron beams at ORNL’s High Flux Isotope Reactor, researchers have discovered that cellulose fibers that are less organized, or noncrystalline, are easier for enzymes to break down. Simulations run on Jaguar helped explain this phenomenon.

“Jaguar has shown us that not only is noncrystalline cellulose more easily broken down, but it also associates less with lignin,” Petridis said. “This was the first simulation that has looked at the interaction of lignin with specific types of cellulose.”

But researchers often want to learn why a process is occurring on a more fundamental level. Fortunately computer models also reveal the reason behind lignin’s preference for crystalline cellulose.

“It is harder for lignin to associate with the noncrystalline cellulose because this cellulose interacts very strongly with water,” Petridis said. “To see this we needed Jaguar’s enormous supercomputing power to simulate 3 million lignin, cellulose, and water molecules.”

Smaller supercomputers can simulate a cellulose fiber and one lignin molecule, but they often miss many of the molecular interactions that ORNL supercomputers like Jaguar or Titan can capture.

Smith’s team was awarded 23 million processor hours on Jaguar in 2012 through the Innovative and Novel Computational Impact on Theory and Experiment, or INCITE, program.

Under the INCITE allocation, the team ran a classic molecular dynamics simulation with a code called GROMACS (for Groningen Machine for Chemical Simulations). The code monitored 3 million atoms and used 30,000 of Jaguar’s cores, which means that each core was responsible for 100 atoms. The application provides information on the interaction of water with the cellulose, degree of lignin aggregation, shapes of lignin molecules, diffusion constants, etc.

The researchers received another 78 million INCITE hours this year to run an adapted version of GROMACS that can take advantage of Titan’s speedy GPUs, making the updated application 10 times bigger and much faster than the one run on Jaguar.

The Titan supercomputer is capable of more than 27,000 trillion calculations per second, and is the fastest open-science supercomputer in America. OLCF’s hybrid machine includes CPUs and NVIDIA GPUs, which are computational accelerators originally found in gaming systems. The GPUs provide the processing power needed to simulate larger and more realistic systems and accelerate scientific discovery.

Current simulations track around 30 million atoms, which include crystalline and noncrystalline cellulose, lignin, enzymes and water molecules. The models also account for the long-range interactions that lignin molecules experience with other surrounding molecules. These interactions make the code especially difficult to scale because the processors have to exchange information very frequently to monitor the position of every atom every fraction of a second.

The team is now studying how lignin behaves in different types of biomass, which will help the researchers identify the plant characteristics best suited for biofuel production.

“The scientific insights we gain help improve the biofuel production process,” Petridis said. “We give engineers hints about how the production process works, which we hope will allow them to design new pretreatment methods and engineer different types of biomass and enzymes that can harvest more energy from plant materials.”

As supercomputing power increases, Petridis’s team will be able to simulate longer biological processes in greater detail. The simulations they run are already high resolution, but they can simulate only processes that happen within milliseconds.

“We can simulate lignin aggregation because it takes place in a millisecond, but there are other interesting biological processes that take much longer than 1 millisecond,” Petridis said. “The future of supercomputing is being able to access time and length scales that are currently accessible only through neutron scattering experiments.”