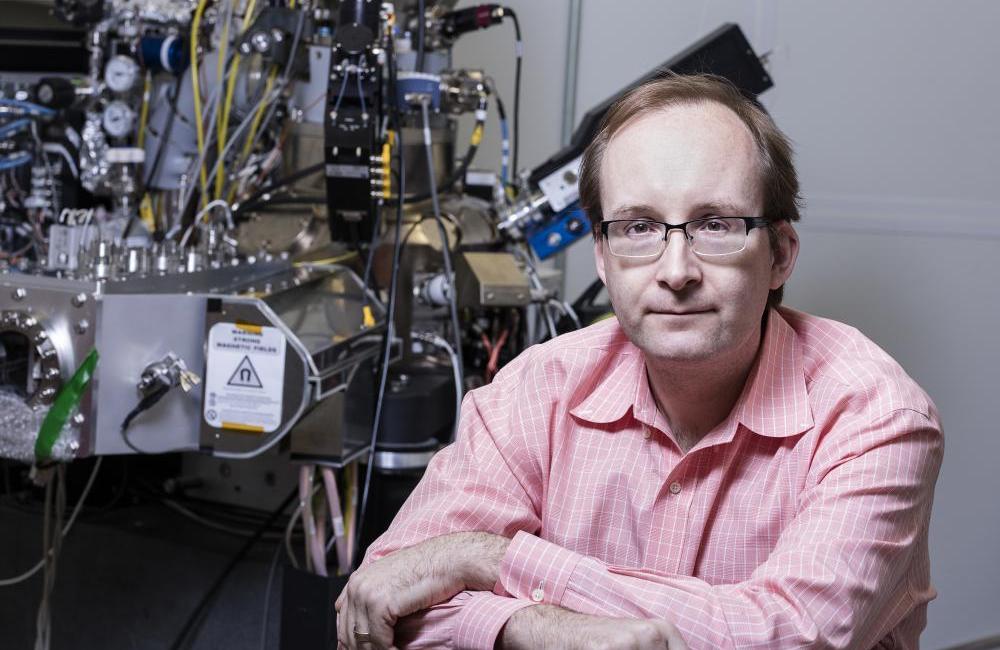 View a hi-res version of this image
Sergei Kalinin, director of the ORNL Institute for Functional Imaging of Materials, with a helium ion microscope at the Center for Nanophase Materials Sciences. Image credit: Carlos Jones, ORNL
Topic: Advanced Materials

“Emergence of AI is a very rare type of event,” said Sergei Kalinin, director of ORNL’s Institute for Functional Imaging of Materials. “Once in a generation there is a paradigm shift in science, and this is ours.”

Kalinin and his colleagues use machine learning to better understand the nature of matter by analyzing data streams from the laboratory’s powerful electron and scanning probe microscopes. The electron beam can induce chemical changes in materials, allowing researchers to analyze defects and solid-state reactions in real time. But an enhanced understanding of these reactions is necessary to reach the next level, Kalinin said.

The scopes produce thousands of images of atomic configurations and their evolutions, from which the researchers aim to extract the trajectories of the atoms. “Not only do they move around, but it’s hard to distinguish individual atoms from one another,” Kalinin said.

By rapidly analyzing the thousands of images in each experiment, however, the researchers can better decipher the trajectories of the individual atoms and atomic defects and, by extension, better understand the laws dictating those trajectories.

“It’s a great machine-learning task,” and one that saves researchers plenty of precious time that would normally be spent tediously poring over the images—time they can then apply to perfecting their experiments and chasing breakthroughs, Kalinin said.

Even better, researchers can use the beam to kick out and move around individual atoms, allowing them to, albeit very slowly, manipulate matter atom by atom (the team recently demonstrated directed motion of atoms by electron beam and directed assembly of silicon groupings on graphene). It’s a trial-and-error process, however, and one that a microscope outfitted with AI could do more quickly and accurately.

“It could do in milliseconds what takes us humans hours,” Kalinin said. And as scientists approach applications that require the construction of matter at the single-atom level, such as superconducting and quantum computing, such a capability will be critical.

To truly realize AI’s potential, however, Kalinin stresses that domain researchers and data scientists need to learn to speak the same language.

“Big data is all about correlation, and it’s not immediately clear which variable is driving the phenomenon,” he said. “But scientists think in terms of causation. We need to learn to speak each other’s language to be truly effective and move the science forward—but now we can fly where we used to crawl.”