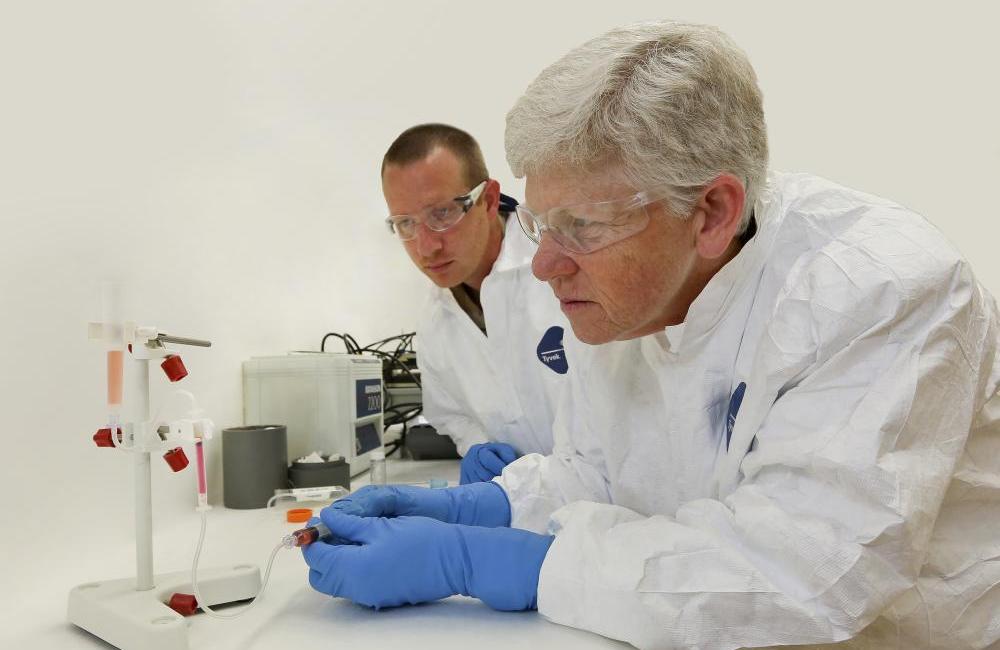 Rose Boll had just stepped out of a long staff meeting at ORNL when she got an unexpected call. Expecting a sales pitch, she heard instead the story of a patient in Germany who had recently been treated with a medical isotope produced by Boll and a team of ORNL researchers and technicians.

The treatment, enabled by the use of actinium-225, had significantly reduced the patient’s tumors from golf ball- to pea-size and allowed him to once again run marathons and accomplish his goal of seeing his son learn to drive.

“He made me promise to pass his thanks on to everyone who works in the production of Ac-225,” Boll said.

Actinium-225 and its “daughter” bismuth-213 are short-lived radioactive isotopes used in a cancer treatment technique known as targeted alpha therapy. The isotopes are attached to engineered antibodies that home in on specific antigens on cancerous cells, whether they are concentrated in a solid tumor or diffused throughout the bloodstream in cases such as leukemia.

“It’s the simplest form of drug delivery,” said ORNL physical chemist Saed Mirzadeh. “It’s like a torpedo that has a warhead on it. The torpedo is the antibody, and the warhead is the attached radioisotope.”

Because the radioisotopes emit radiation in the form of alpha particles that deposit significant energy over a short distance, the cell damage is primarily focused on the target cells—minimizing damage to surrounding healthy tissue or cells.

“If you can directly send it to where you want them to go, then you only destroy a small cluster of cells,” Mirzadeh said. “That’s consistent with the future of medicine—aiming for a smaller and smaller target, ultimately single-cell therapy.”

ORNL’s path to producing Ac-225 for use in cancer therapy began in 1994, when Mirzadeh obtained a small amount of thorium-229, a waste material from the production of fuel in the lab’s 1960s-era Molten Salt Reactor Experiment. He led the development of a multistep chemical process to first purify the valuable Th-229 and then extract, or “milk,” isotopically pure Ac-225 from the thorium.

The lab sent its first shipment of Ac-225 to the National Institutes of Health in 1997; since then, approximately 900 shipments have been distributed to hospitals, clinical centers and universities through the Department of Energy’s Isotopes Business Office, conveniently located at ORNL.

Initial preclinical studies in the late 1990s, led by former ORNL biochemist Steve Kennel, demonstrated Ac-225’s potential for treating lung tumors in mice. They were followed by several U.S.-based clinical trials focused on the treatment of acute myeloid leukemia at Memorial Sloan Kettering Cancer Center. European researchers have also examined Ac-225’s therapeutic applications on other tumor types, such as brain and prostate cancers. Its use in acute myeloid leukemia treatment, supported by a private company, is entering phase two trials with hopes for Food and Drug Administration approval in the near future.

Recognizing the potential value of Ac-225, DOE’s Office of Science in 2012 initiated a project to develop an alternative method capable of producing greater quantities of the isotope.

“Because we have a limited amount of the parent material at this time, we’re looking for ways to make more,” Boll said. “We are maxed out on how much actinium we can harvest from our current Th-229 stock. Both the recovery and production of additional thorium and direct production of Ac-225 are needed to meet therapeutic needs.”

The new process involves irradiating natural thorium targets with high-energy protons in accelerators at Los Alamos and Brookhaven national laboratories, followed by extensive chemical processing of targets at ORNL to produce sufficiently pure actinium for medical applications. The resulting material is now being studied to evaluate its safety, and clinical trials are expected to begin in the next two to three years.

After nearly 20 years of Ac-225 production, the relevance of the mission—extending and even saving lives—continues to motivate the entire ORNL team, from chemical technicians to transportation and maintenance staff. In particular, the researchers point to three members of the technical staff: Greg Groover, Karen Murphy and Shelley Van Cleve.

Receiving phone calls from patients, says Boll, is a welcome reminder of the work’s significance.

“Everyone has known someone with cancer, so the work has been very personal,” Boll said. “We know we have a patient who’s waiting to be treated.”