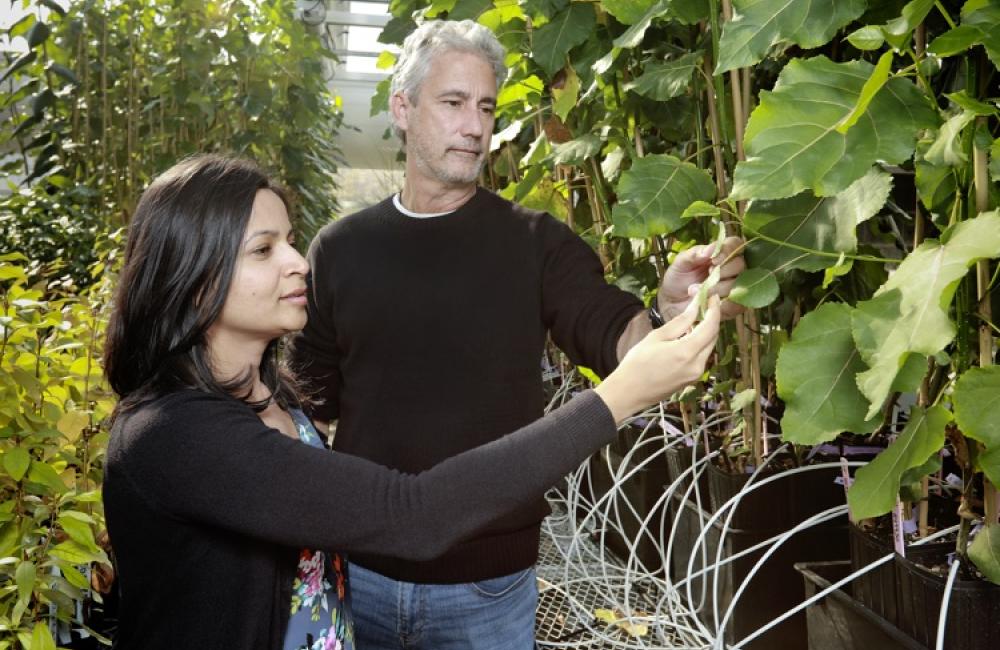 Using the computational muscle available at ORNL, Tuskan and his colleagues have resequenced about 1,000 genotypes of the fast-growing perennial poplar tree, linking DNA changes with specific characteristics of the trees. The resulting Genome-Wide Association Study dataset helps scientists overcome biomass recalcitrance, the natural resistance of plants like the poplar to being broken down to simple sugars for conversion to biofuels. Eventually it may also aid in the production of specialty fuels such as C4 alcohols and esters.

Tuskan holds a Ph.D. in genetics from Texas A&M University. He has been at ORNL since 1990.

1. What is bioenergy sustainability?

In the context of bioenergy, sustainability is the deployment of plant material that will be harvested for conversion to liquid transportation fuels in a manner that (1) does not deplete resources in a given environment and (2) provides economic returns on the investment the landowner makes in establishing a biofuels plantation. Sustainability can be in terms of soil mineralization, or soil carbon, or wildlife use. We are exploring the biological options of developing perennial plant materials like poplar that are drought tolerant and water- and nitrogen-use efficient and that have a positive impact on soil carbon and wildlife use.

We have a finite amount of land on the planet and certainly within the U.S. The rational use of that land requires that we think about how a parcel of land will be used today and available to future generations for future applications. We don’t want to degrade or cause detrimental, irreversible changes to croplands used to produce bioenergy crops.

It’s also important from an economic point of view—looking at return on investment. If you don’t have to apply as much fertilizer today because the trees are nitrogen-use efficient, then there’s a benefit today to the landowner. But in the broader context, there’s a benefit to future generations where that land remains productive.

Perennial plants offer a unique resource with regard to sustainability. They grow annually without replanting, they recycle nutrients and carbon from above-ground to below-ground tissues intra-annually, and as such they require low chemical inputs. Collectively then, a landowner has to enter his or her field less often, thus reducing soil compaction and erosion with fewer gallons of diesel being consumed in the process.

3. You head the Plant Systems Biology Group at ORNL. What is the group’s focus?

We’re working to understand the genetic determinants controlling various phenotypes that are relevant to DOE missions. For bioenergy we’re looking at cell-wall formation and deconstruction—the ability to take polymers in the plant cell wall, convert them to sugars for fuel production, and take lignin and convert it to materials for applications in buildings such as insulative foams, carbon fiber in the automotive industry, or replacements for plastics.

So we’re trying to merchandise or partition the plant cell wall into various product streams that then displace petroleum as a feedstock. Our role in that is to understand the genetic mechanisms, the genes that are controlling those traits.

At the same time, we have begun to evaluate traits like water- and nutrient-use efficiency as means of decreasing the environmental impacts of poplar and switchgrass as sustainable bioenergy crops. For example, in the context of carbon sequestration, the ability to remove carbon from the atmosphere and sequester it in soils is determined by the interface between a plant’s roots and a microbe in the soil. So we’re looking at the genetic mechanisms that attract or signal a beneficial relationship between a plant and a microbe. We use DNA sequencing, RNA sequencing, metabolic profiling and protein profiling to understand these relationships, whether they’re for cell-wall development or plant–microbe interactions. They’re all directed toward DOE missions.

4. What are some of the group’s accomplishments?

We’ve been very fortunate in having long-term support in our work. We’ve identified a number of genes that control the movement of carbon into cell-wall monomers and polymers, and we’ve patented several genes that have been licensed by various companies, notably Forage Genetics and, most recently, GreenWood Resources.

For Forage Genetics the benefit was the modification of lignin in the cell wall. Lignin is the glue that holds the cell wall together; if you modify it, the cell wall can deconstruct more readily and can be converted into biofuels more easily, more efficiently, and more economically. If you put that same gene into a forage crop like alfalfa, when a cow eats it, it too can digest the alfalfa more effectively. In the case of GreenWood Resources, they’re interested in taking that knowledge and applying it to pulp and paper production.

These are a few examples of how basic research ultimately can find many, many applications.

5. Where do you see this work going in the future?

We’ve just begun to scratch the surface of characterizing and understanding genes and gene function. I would say that in the near term, the next five years, we’re going to take a systematic view of this work. We’ve been successful in finding one gene that controls a trait or a phenotype; now we’re going to examine the entire genetic network in an effort to understand the system of genes acting in concert, that are induced—that is, turned on and off—by environmental signals, and control how an organism behaves. We’ll look at how an organism develops and, ultimately, how it might be utilized in a sustainable manner.