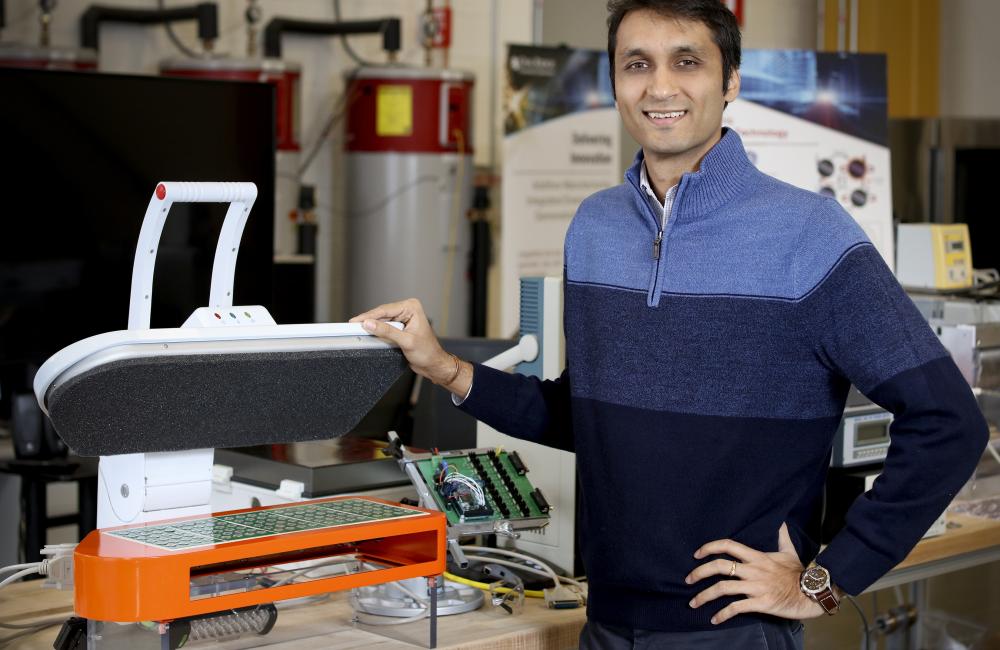 Viral Patel came to Oak Ridge National Laboratory with the aim of conducting research that would provide benefits to the average consumer, and his work has not disappointed.

Viral jumped into three energy efficiency projects almost immediately after starting at the lab as a postdoctoral researcher in the Energy and Transportation Science Division in 2015, working on development of two clothes dryers (one ultrasonic and the other thermoelectric) and a new, more efficient rotating heat exchanger for refrigerator applications.

His involvement in the ultrasonic dryer work meant Viral was often pushed into the limelight as the prototype received heavy media coverage.  The project involves the use of ultrasonic transducers to nebulize water from fabric, and it was scaled up to a press-type dryer by mid-2016. The image of researchers placing wet fabric in the dryer and the resulting cascade of cold mist as the cloth was dried in seconds was a familiar one to those following the lab’s social media last year.

The work continues still, with Viral and other researchers recently conducting comprehensive testing to determine overall energy efficiency of the technology. The potential for energy savings is huge; conventional clothes dryers using thermal evaporation are estimated to account for roughly 3% of residential primary energy consumption in the United States.

In the thermoelectric clothes dryer project, ORNL worked with industry partner Sheetak to devise an appliance using thermoelectric heat pump technology that consumed 40% less energy than typical dryers, mainly by recovering much of the energy used to evaporate water from clothes and by using a lower temperature lift.

The rotating heat exchanger project has as its goal a novel, low-frost miniaturized air-to-refrigerant heat exchanger with a reduced volume and 12% improvement in performance over current designs for refrigerator evaporators. Viral’s research is funded through the US Department of Energy’s Building Technologies Office, a part of DOE’s Office of Energy Efficiency and Renewable Energy.

What drives Viral in his work, he says, is a genuine interest in helping people and improving their lives.

Viral began his studies after moving from Zambia to the United States for college. As an undergraduate at the Illinois Institute of Technology, he started out in aerospace engineering. But after taking a course in thermal systems design, he decided to broaden his horizons and career opportunities with a dual major in mechanical engineering. Viral said the class was “one of those experiences that opens up your eyes to what you might be doing in the next stage of your life. It was very applications-driven.

Applying to ORNL was an easy choice given the lab’s reputation in the research community, Viral said, and it fit his aspirations to conduct research in energy efficiency. “I was interested in thermal engineering and heat transfer, but at the same time wanted to do something with my degree that would result in a benefit for people,” the researcher said. “ORNL is one of the places where you can conduct research and then expect that in a few years people can buy it for their homes. That’s very appealing to me.”

“I pretty much always wanted to be a technical person. The reason I started out in aerospace is that airplanes really excited me as kid,” Viral said. “When I talk to other engineers, their stories are almost the same. I did well in math and science and played with Legos. That seems to be a weird, common thing that people from all over the world have done.”

Collaboration with industry and other partners such as university researchers makes working at ORNL unique, Viral said. He also enjoys how the lab encourages professional development among its post-docs, with opportunities to learn new skills and to write and present papers.

“I think the assumption is that as a post-doc, the ideal scenario is that you either stay on at the lab, or if you move on to another place you’ve had such a great experience that you may come back one day, or that you will have collaborations with ORNL wherever you go,” he said.

Outside the lab, Viral enjoys reading science fiction, loves to cook and travel, and spends time with friends and family. His family is spread across the globe now—on both US coasts, back in Zambia, and in Australia. He tries to visit as often as he can.

ORNL is managed by UT-Battelle for DOE’s Office of Science, the single largest supporter of basic research in the physical sciences in the United States. DOE’s Office of Science is working to address some of the most pressing challenges of our time. For more information, please visit http://energy.gov/science/. 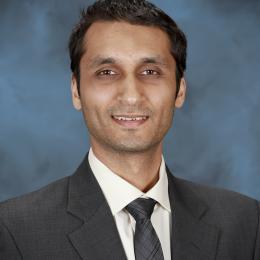