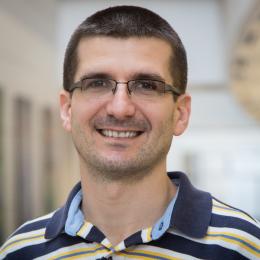 Ovidiu (Ovi) Garlea is instrument scientist at the HYSPEC spectrometer at the Spallation Neutron Source. He holds a courtesy appointment with the Department of Chemistry and Biochemistry at Florida State University and is adjoint associate professor at the Department of Materials Sciences and Engineering at the University of Tennessee. He previously served as lead instrument scientist at the HB2A Neutron Powder Diffractometer at High Flux Isotope Reactor where he oversaw the instrument installation and built a vibrant magnetic diffraction community. Before becoming a staff member, Ovi has worked as a post-doctoral researcher at the Oak Ridge National Laboratory (2005-2007), at the Ames Laboratory (2003-2005) and at the Synchrotron Light Laboratory ELETTRA (2003). He received his PhD in solid state physics from Joseph-Fourier University, Grenoble, France in 2001.

Ovi Garlea initiated a workshop series on Magnetic Structure Determination that runs regularly since 2009, and a workshop on Polarized Neutron Diffraction and Spectroscopy. He serves as a member in the International Union of Crystallography (IUCr) Commission on Magnetic Structure, authored a book chapter "Magnetic Structures" in Neutron Scattering - Magnetic and Quantum Phenomena, Vol. 48 (Academic Press, 2016), and published over 160 research articles in peer reviewed journals (with a h-index of 27). He is also a senior adviser for the new neutron diffraction instrument VERDI (Versatile Diffractometer for complex magnetic structure), proposed for the Second Target Station at SNS.

Ovi Garlea is interacting with dozens of visiting scientists annually, and greatly enjoys his involvement in science education and outreach. Over the years he has hosted and mentored a number of undergraduates, graduate students and postdoctoral fellows from different universities including Florida State University, University of Tennessee, Clemson University, Georgia Tech, University of Virginia, and Louisiana State University.

Quantum Effect on the Ground State of the Triple-Perovskite Ba3MNb2O9 (M = Co, Ni, and Mn) with Triangular-Lattice...