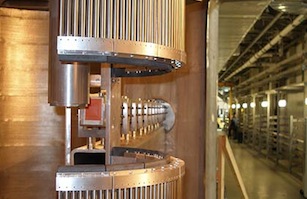 Understanding the interplay between structure and dynamics is the key to obtaining tailor-made materials. In the last few years, a large effort has been devoted to characterizing and relating the structure and dynamic properties in families of polymers with alkyl side groups. Now researchers have used quasielastic neutron scattering to investigate the hydrogen dynamics in poly(alkylene oxide)s with different side-chain lengths at temperatures below, as well as above, the glass transition. The combination of techniques and instruments used is bringing a more complete understanding of multiple contributions to system dynamics. The results suggest that the dynamic asymmetry in systems with intrinsic dynamic heterogeneities between parts is the key ingredient leading to both plasticization (increased fluidity) and confinement effects.

Inelastic neutron scattering measurements using the Backscattering Spectrometer (BASIS) at the Spallation Neutron Source, combined with results from two spectrometers at the Institut Laue-Langevin in France, have allowed researchers to explore almost four orders of magnitude in time—from the picosecond to the nanosecond range—with spatial resolution.

The results reveal the simultaneous occurrence of vibrations and localized side-group motions at low temperatures and additional diffusive-like dynamics at high temperatures. The localized processes of the side groups show stretching of the scattering function, associated activation energies, and spatial extents that increase with increasing temperature.

Backscattering spectra on the side-group dynamics of poly(n-hexyl methacrylate) in the same temperature range show evidence for confinement effects.

Research conducted at the Spallation Neutron Source was funded by the US Department of Energy Office of Basic Energy Sciences.

BASIS results on the different PAOs investigated at Q = 1.1 Å−1 for T = 175 and 360 K (a). The data are normalized to their intensity at _ω = 0. For each sample the line, in the same color as the experimental data, is the result of the convolution of the resolution function (dotted line, corresponding to a Vanadium measurement) with the Fourier transformed fitting. In part b, the data corresponding to PHO have been represented without normalization to the elastic value. The corresponding fitting curves are represented in black to better appreciate the good agreement.