Beginning as a research associate at ORNL in 1974, Lindberg served as group leader for Atmospheric and Biogeochemical Cycling at ORNL, and as senior scientists in the Environmental Sciences Division. He holds adjunct professor status at the University of Michigan School of Public Health, the University of Tennessee Graduate Program in Ecology and Evolutionary Biology, and the University of Nevada Department of Environmental and Resource Sciences. He is internationally recognized for his work in the areas of the environmental chemistry of trace metals, biogeochemical cycling in forests, and atmosphere/surface exchange processes.

His current research programs include development of micrometeorological and surface flux methods for quantifying air/surface exchange rates of air toxics and for measuring atmospheric speciation, with an emphasis on mercury. This work involves collaborations with colleagues in North America, Europe, and Asia. The areas of research include mercury evasion from wetlands; the speciation of atmospheric mercury; natural processes of mercury emission from the landscape; the influence of municipal sludge and solid waste on mercury emissions from soils and landfills; and the influence of terrain and forest cover on atmospheric deposition of toxics, nitrogen, and sulfur. His projects involve fieldwork in Canada, Germany, Siberia, Sweden, and the United States (Alaska, California, Florida, Georgia, Michigan, Nevada, and New York).

He has edited several books, conference proceedings, and special journal issues on atmospheric sulfur, sources and interactions of atmospheric acidity, trace metals in the environment, aquatic processes and lake acidification, the atmospheric mercury cycle, and atmospheric deposition and nutrient cycling in forests. He has published more than 200 papers, including more than 100 in refereed journals and also including several articles in Science and Nature. He is an associate editor for three international journals, Environmental Reviews, Science of the Total Environment, and Tellus. He has chaired several large international conferences, symposia, and workshops.

Lindberg received the Alexander von Humboldt Fellowship Award from the Federal Republic of Germany in 1986, the Haagen-Smit Prize for Outstanding Publication in 2011 and the Kathryn R. Mahaffey Lifetime Achievement Award in Mercury Research in 2013. He served as chairman of the U.S. National Atmospheric Deposition Program from 1988 to 1989 and director of the EPRI Integrated Forest Study (IFS) from 1986 to 1990. He was elected Fellow of the American Association for the Advancement of Science in 1992. He has served on scientific panels and review boards for several countries and federal agencies and has been an invited lecturer and plenary speaker at more than 25 institutes and conferences outside of the United States. He has been an invited co-organizer, plenary speaker, and panel chairman at several North Atlantic Treaty Organization (NATO) Advanced Science Institute Expert Workshops, Gordon Conferences, and United Nations (UN) Environmental Workshops in North America, Europe, and Asia.

Active in the support of student research, he has served as a formal external committee member for the theses of numerous master's and doctoral students and has directed several postdoctoral candidates. He has also served as a formal thesis disputation opponent for three Ph.D. students in European universities and was the expert external reviewer for the habilitation to professor of a German scientist. He has been invited to spend research sabbaticals at the University of Gottingen in Germany; the Swedish Environmental Research Institute; the University of Stockholm, the Institute of Hydrophysics at the German GKSS Laboratory, and at the University of Lund in Sweden.

He was named a corporate fellow in 2000. 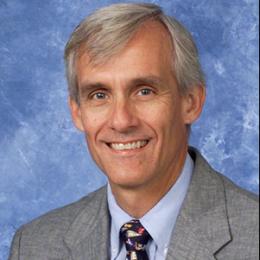