Sheng Dai received a bachelor’s degree in chemistry and a master’s degree in organic chemistry from Zhejiang University in Hangzhou, China, and a Ph.D. in chemistry from the University of Tennessee. He joined ORNL in 1990 as a postdoctoral fellow and currently leads the Nanomaterials Chemistry Group in the Chemical Sciences Division. He is a deputy director of the Fluid Interface Reactions, Structures and Transport Center, one of two Energy Frontier Research Centers at ORNL.

Sheng is internationally recognized for his efforts in designing and synthesizing novel functional porous materials, nanomaterials, and ionic liquids and in applying these innovations to energy-relevant problems. He has conducted pioneering studies of the functionality of mesoporous oxides and carbons for real-world applications, ionic liquids for chemical separations and materials synthesis, and catalysis by nanomaterials. He was a key contributor to the development of a 2011 R&D 100 award winner, mesoporous carbon for capacitive deionization electrodes for desalination.

Sheng’s work has resulted in over 280 peer-reviewed publications and 13 U.S. patents, and his research is frequently featured on journal covers. He has also presented more than 100 invited talks at national and international conferences. Sheng received the Director’s Award for Outstanding Individual Accomplishment in Science and Technology at UT Battelle’s 2010 Awards Night Ceremony.

He was named a corporate fellow in 2011. 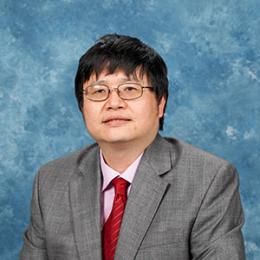