Ask Tyler Gerczak to find a negative in working at the Department of Energy’s Oak Ridge National Laboratory, and his only complaint is the summer weather. It is not as forgiving as the summers in Pulaski, Wisconsin, his hometown.

But go beyond the August heat, something Gerczak says has grown on him each year, and the materials scientist points to ORNL’s roster of scientists and engineers as a big reason he joined the lab in 2013. The multidisciplinary team continues ORNL’s legacy in nuclear fuels science, and Gerczak plays a key role in post-irradiation examination and separate effects testing of current fuels for light water reactors and advanced fuel types that could be used in future nuclear systems.

“I call myself a materials scientist moonlighting as a nuclear engineer,” Gerczak said with a laugh. “I like to apply materials science principles to solve nuclear fuel materials challenges. Fuels present a unique set of variables, such as fission and radiation damage, which doesn’t exist in other materials applications. It is really unique, as it’s an ever-evolving materials system over its lifetime.”

Finding a passion for nuclear materials

Growing up a few miles from Lambeau Field and his beloved Green Bay Packers, Gerczak was unfamiliar with what college could offer. His parents encouraged a path toward engineering, and he found his calling at the University of Wisconsin–Madison.

Although initially interested in chemical engineering, Gerczak said exposure to materials science—and the tangible aspect of the work—intrigued him. Thanks to Dr. David Larbalestier, a former materials science engineering professor at UW–Madison and an expert in superconductivity, Gerczak had the opportunity to earn experience in an academic laboratory and better understand the basics of scientific research.

After completing his undergraduate degree in materials science and engineering, Gerczak stayed at UW–Madison for graduate school under the direction of Dr. Todd Allen. His research with Allen focused on tristructural-isotropic (TRISO) coated particle fuels and provided a seamless connection to the work taking place at ORNL.

“ORNL was doing TRISO fuels research well before I arrived, and it made for a great transition into the national laboratory system,” he said. “There was a great team and everyone had their role, even me as a graduate student.”

Five years later, Gerczak and ORNL continue investigating numerous types of nuclear fuels, with TRISO remaining a significant part of these efforts. The reason is simple—interest from regulators, industry and others is abundant as multiple companies pursue reactor concepts that would use TRISO fuel.

The TRISO fuel particles are spherical and smaller than the tip of a pencil and are made of a uranium-bearing center and surrounded by successive coatings. These particles can be compacted into various shapes to make a fuel form. Gerczak uses an array of examination techniques to understand what has taken place with the fuel after irradiation inside of Idaho National Laboratory’s Advanced Test Reactor.

Doing what Gerczak describes as a “postmortem” investigation helps improve the understanding of how and why the fuel performs as it does. It is vital information that will assist in licensing the fuel and improving modeling of various reactor designs.

“We know quite a bit about TRISO fuel, and it performs exceptionally well under the conditions described for it,” he said. “But if we consider different nuclear designs, there will be challenges associated with pushing the boundaries of the fuel. We want to continue to improve upon the current fuel design and the understanding we have.”

He spends much of his day asking “Why?” and devising ways to answer that question. A recent example is a project Gerczak led in designing a furnace system for versatile, long-term thermal testing of TRISO fuel. After particles have been irradiated, Gerczak and his colleagues in ORNL’s Nuclear Fuel Materials Group place them inside the system and expose them at temperatures up to 1,600 degrees Celsius for more than 1,000 hours to explore particle stability and fission product release.

“This goes beyond what we do in other tests. There are always a few outstanding questions when we qualify fuels, and this is a new way to isolate variables and hone in on what’s happening. What can you find out when you subject fuel to such extreme conditions that go beyond the conditions that would be expected inside a reactor?” Gerczak said.

Nuclear energy for the next generation

Gerczak believes ORNL and the national laboratory community as a whole are a big part of his success at ORNL. Not only does he have a long list of colleagues in East Tennessee, but he also bounces ideas off nuclear experts at other DOE laboratories and universities.

The importance of a wide network of collaborators is reflected in his involvement in the Modeling, Experimentation and Validation School. The two-week school, which rotates annually among ORNL, ANL and INL, provides an opportunity for early career engineers and scientists to learn from professionals across the nuclear community. The 2019 school was hosted at ORNL with Gerczak serving as the ORNL academic dean.

“We want to educate the next generation of scientists and make sure we have vibrant and ambitious people trying to move these technologies forward. If we rest on our laurels, we are not going to advance,” he said. “Building a community of engaged scientists is a great thing.”

As a husband and father of two children under the age of 5, Gerczak believes advancing nuclear energy is imperative. And though he’s driven by the scientific challenges he faces in the lab, that’s just “one side of the coin” that drives him.

“This is something I believe in, and I’m proud of. We need a source of clean energy that is consistent and can provide baseload power,” he said. “If we have a more diverse energy toolbox, there are significant economic and environmental advantages. As a dad, I want my children to have a great future, and I don’t want to leave behind an environment that is unlivable.”

UT-Battelle LLC manages ORNL for the Department of Energy’s Office of Science, the single largest supporter of basic research in the physical sciences in the United States. The Office of Science is working to address some of the most pressing challenges of our time. For more information, please visit https://energy.gov/science. 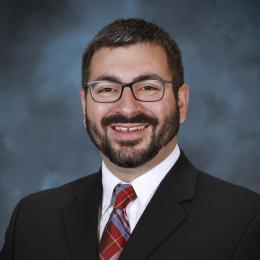