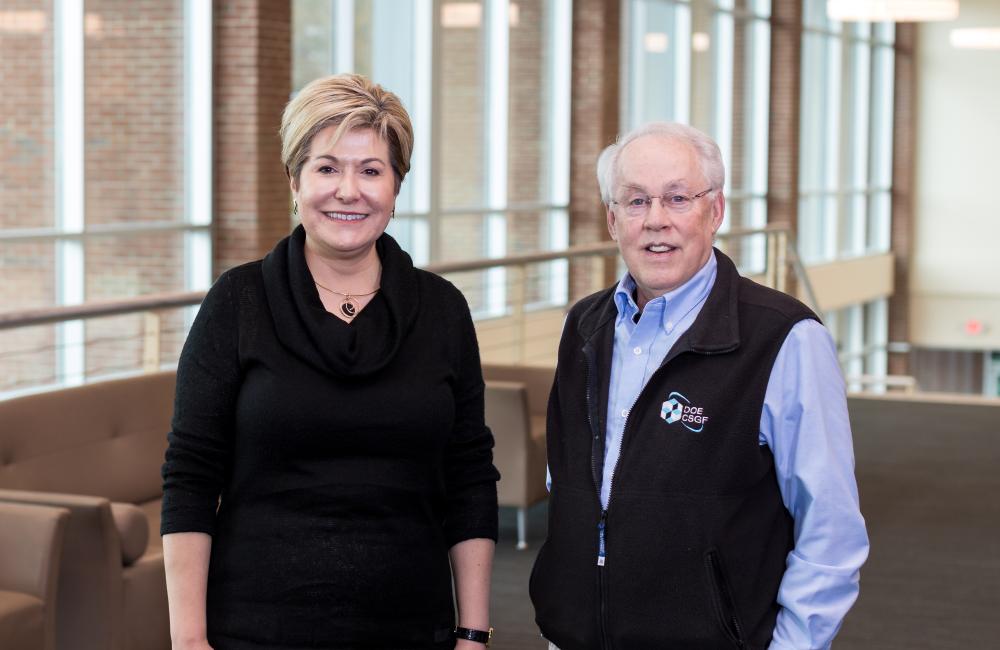 Gina Tourassi, left, has been appointed as director of the National Center for Computational Sciences at Oak Ridge National Laboratory. Tourassi replaces NCCS director Jim Hack, who will transition to a strategic leadership role in CCSD. Credit: Carlos Jones/ORNL

The NCCS is home to the Oak Ridge Leadership Computing Facility, a Department of Energy Office of Science User Facility. The leadership change was made effective on December 9.

Tourassi first joined ORNL in 2011 in the Computational Sciences and Engineering Division as the founding director of the ORNL Health Data Sciences Institute and most recently served as the group leader of ORNL’s Biomedical Sciences, Engineering, and Computing Group.

Before coming to ORNL, she held numerous academic positions at Duke University Medical Center. Her prolific scientific efforts have produced 11 patents and invention disclosures and a 2014 R&D 100 award, as well as more than 250 peer-reviewed journal articles, conference proceedings articles, and book chapters.

“Gina was chosen from an outstanding pool of candidates for her dedication to world-class research,” said Jeff Nichols, ORNL’s Computing and Computational Sciences associate laboratory director. “Gina has used her interdisciplinary expertise at the intersection of artificial intelligence and applied data sciences to spearhead rapid growth of the Laboratory’s capabilities in biomedical sciences and engineering.”

Under Tourassi’s leadership, BSEC grew from five to 23 staff members in only three years. The diversity and talent of the team—ensured by the fact that Tourassi personally hired every single one of its members—has helped position ORNL as a visionary player in applied computational sciences.

With OLCF Program Director Buddy Bland and OLCF-5 Project Director Justin Whitt, Tourassi will lead the division as it continues to prepare for installation and the 2021 launch of Frontier, one of America’s first exascale supercomputers. A Cray Shasta system, the Frontier supercomputer will offer best-in-class traditional scientific modeling and simulation capabilities while also leading the world in artificial intelligence and data analytics.

Tourassi replaces NCCS director Jim Hack, who will transition to a strategic leadership role in CCSD. Hack’s leadership of the NCCS over the past 12 years contributed significantly to the scientific growth of the center.

Under Hack’s stewardship, the division stood up three world-leading computing systems for DOE: Jaguar, Titan, and Summit—the latter of which is currently the world’s fastest and smartest for scientific research. During his tenure, the NCCS nearly doubled in size and has been a trailblazer in high-performance computing for the past decade.

“We welcome Tourassi to her new role, and we are excited to see how her significant experience and passion for computing and computational sciences will contribute to the growth of the research we make possible at ORNL,” Nichols said.

UT-Battelle manages ORNL for DOE’s Office of Science. The Office of Science is the single largest supporter of basic research in the physical sciences in the United States and is working to address some of the most pressing challenges of our time. For more information, please visit https://energy.gov/science.