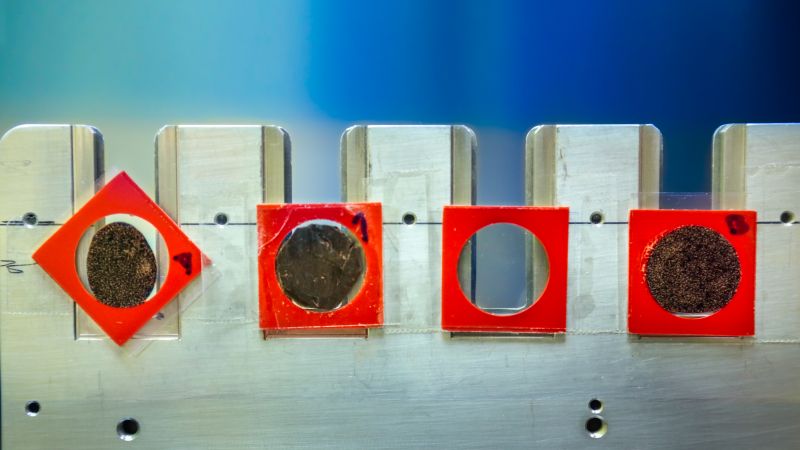 Samples of 70% dark chocolate prepared for study with the USANS instrument at the Spallation Neutron Source. (Credit: ORNL/Genevieve Martin)

Tempering, the heating process that gives chocolate its appealing sheen and creamy texture, is a crucial part of crafting quality chocolate. But, at the molecular level, it gets a little tricky, and when done incorrectly, can render entire batches of chocolate gritty and unappetizing.

Looking for improvements, researchers Fernanda Peyronel from the University of Guelph, Ontario, and David Pink from St. Francis Xavier University, Nova Scotia, used a combination of neutrons and x-ray scattering at the Department of Energy’s Oak Ridge (ORNL) and Argonne National Laboratories to better understand how tempering affects chocolate’s microstructure and, consequentially, how that relationship impacts taste.

“We’re looking at how mouthfeel—which is how chocolate feels against the tongue as it melts in the mouth—affects taste, and how that links to tiny crystallites of chocolate in the chocolate bar,” said ORNL instrument scientist Ken Littrell.

Littrell explained that whether a chocolate is smooth and creamy depends on how long it’s been tempered, or, melted down to a liquid and stirred. Tempering shrinks micron-size crystallites of chocolate, resulting in a smoother mouthfeel. In contrast, chocolate that hasn’t been tempered or was tempered poorly consists of larger chocolate crystallites, which feel rough and unpleasant against the tongue as chocolate melts in the mouth.

“The hope is that we’ll be able to quantify smoothness or grittiness scientifically, corresponding to what we see in the chocolate’s microstructure,” Littrell said.

To establish whether gritty textures are more or less tasty than smooth textures, the researchers gave chocolate samples to an untrained taste-testing group and asked them to rank the chocolates from best to worst. Invariably, the samples that’d been tempered were ranked best because of their smooth, creamy texture, while the untempered chocolates were ranked worst and criticized for their unsavory grit.

“With that information, we had good reason to justify our argument that gritty mouthfeels are generally undesirable compared with smooth mouthfeels, and that it was worth investigating which physical structures in chocolate are associated with each sensation,” said Littrell.

To do that, the researchers made another set of samples from a bar of artisanal dark chocolate, which they examined with x-rays at Argonne National Laboratory’s Advanced Photon Source (APS). Then, to verify and extend their results, they analyzed their samples with neutrons using the Ultra-Small-Angle Neutron Scattering instrument at ORNL’s Spallation Neutron Source (SNS).

Neutrons are ideal for this experiment because they offer researchers an excellent view of matter at the micron scale, which is perfect for investigating chocolate’s microstructure. And, because neutrons and x-rays complement each other, neutrons are a valuable tool for verifying the results obtained via x-ray scattering at Argonne.

“X-rays and neutrons simply see matter differently, so it’s never a bad idea to use both techniques in order to get a better look at your samples,” Littrell said.

The researchers are analyzing the results, but they hope to use what they learn to improve chocolate manufacturing processes and make it easier for companies to produce larger quantities of high-quality chocolate.

“Based on this information, companies may be able to tune their processes so that they can maintain the ideal conditions to make the best chocolate,” said Littrell.