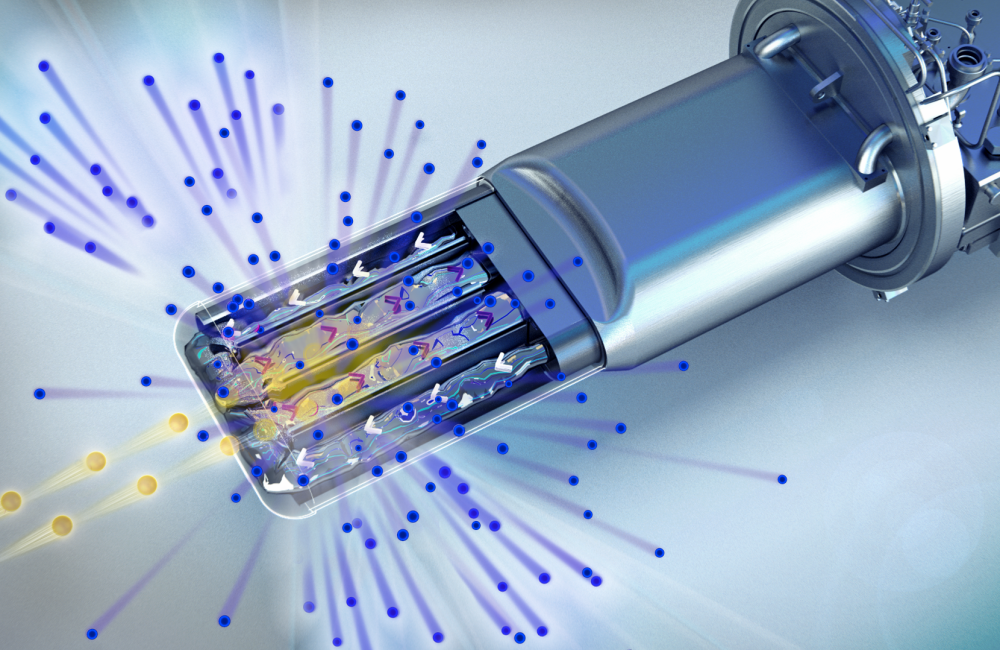 View a hi-res version of this image
As protons (yellow) strike the target vessel and pass into the liquid mercury inside, the protons are absorbed, creating neutrons (blue) that are then sent through moderators and beam tubes to research instruments to study the fundamental properties of materials. Credit: Jill Hemman/Oak Ridge National Laboratory, U.S. Dept. of Energy
Topic: Neutron Science

SNS, a DOE Office of Science User Facility, began operations in 2006 and is currently the world’s most powerful pulsed accelerator-based neutron scattering facility, used by scientists to reveal fundamental properties and behaviors of energy and materials at the atomic scale. Neutron contributions at SNS have resulted in advances in electronic devices, improved drug delivery, and stronger building materials for transportation infrastructure.

The facility accelerates protons at nearly 90 percent the speed of light down a linear accelerator and into a ring that compresses the proton pulse by a factor of 1,000. The protons collide with a liquid mercury target, which creates a “spall” of neutrons that flow to powerful instruments where scientists measure the neutrons’ interactions with a variety of materials.

Continuous and reliable operations at 1.3MW during SNS’s latest 12-week production cycle were enabled by a more robust stainless-steel target module and a series of improvements in the accelerator systems that allowed higher proton current and energy. SNS has reached power levels as high as 1.4 MW, but this is the first time the facility has sustained levels as high as 1.3MW over a predicted timeframe.

Oak Ridge scientists and engineers have extended the lifetime of SNS targets by studying the performance of previous targets and making adjustments such as the injection of small bubbles of helium gas into the target vessel’s liquid mercury flow—an improvement that reduces the impact stresses caused by the proton beam.

In 2016, SNS implemented a Target Management Plan to capture performance data and incorporate design improvements in new targets, which are currently installed approximately three times a year. Since the plan’s implementation, each target has performed reliably according to its intended design.

As planned, SNS will operate the next neutron production cycle at 1.4MW.

SNS is a DOE Office of Science User Facility. UT-Battelle manages ORNL for the DOE’s Office of Science. The Office of Science is the single largest supporter of basic research in the physical sciences in the United States, and is working to address some of the most pressing challenges of our time. For more information, please visit http://energy.gov/science/.