SmartTruck steps up simulations for certification by computation 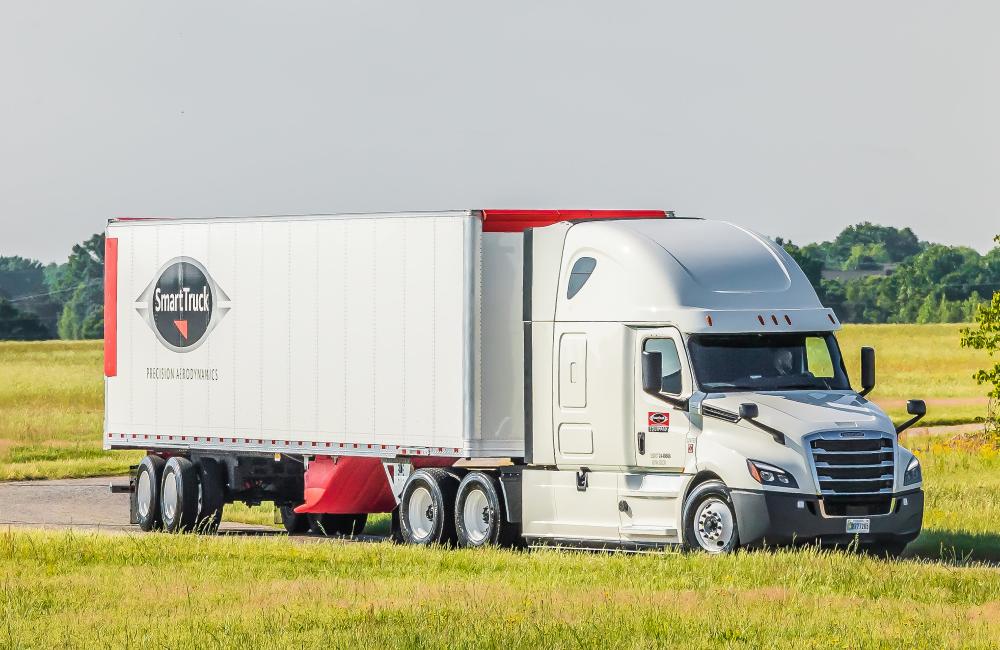 View a hi-res version of this image
SmartTruck, a small business in Greenville, SC, recently completed its first detailed unsteady analysis using modeling and simulation at the OLCF and became the first company to request certification from the EPA through CFD. Image Credit: SmartTruck

August 29, 2018 — Long-haul tractor trailers, often referred to as “18-wheelers,” transport everything from household goods to supermarket foodstuffs across the United States every year. According to the Bureau of Transportation Statistics, these trucks moved more than 10 billion tons of goods—70.6 percent of the nation’s total freight shipments—in 2016. But this transport doesn’t come without cost. That same year, medium- and heavy-duty trucks also produced 410 million tons of CO2 and consumed 42.5 billion gallons of fuel.

In 2016 the US Environmental Protection Agency (EPA) and the National Highway Traffic Safety Administration issued the Phase 2 Greenhouse Gas Emissions and Fuel Efficiency Standards for Medium- and Heavy-Duty Engines and Vehicles. The new regulations aim to reduce carbon emissions and improve the fuel efficiency of heavy-duty vehicles by minimizing drag, the force that opposes a truck’s movement through the air.

Historically, companies that manufacture the trucks and their add-on parts have been permitted to certify their products only through physical testing, often using a wind tunnel in which air flows past a scaled-down model in a tunnel or using a special track for road testing.

However, for the first time, the EPA offered the option to certify accessory products by computational fluid dynamics (CFD) calculations, which describe the properties and interactions in a flow—in this case, the airflow that runs past traveling tractor trailers. Certification by CFD would be convenient and, ultimately, cheaper by eliminating uncontrollable variables that hamper physical testing (e.g., weather, test track availability, and the cost of wind tunnel testing). The Phase 2 program requires the more rigorous unsteady (versus steady) CFD analysis and aims to determine best practices that could extend to a range of CFD challenges in the industry.

Access to the computational resources at the Oak Ridge Leadership Computing Facility (OLCF), a US Department of Energy (DOE) Office of Science User Facility at DOE’s Oak Ridge National Laboratory (ORNL), enabled SmartTruck to successfully complete, for the first time, a detailed unsteady analysis using modeling and simulation. As a result, SmartTruck also became the first company to request certification through computational analysis instead of through physical testing.

From 2009 to 2010, SmartTruck used the OLCF’s resources to design its original add-on components. Given the company’s experience with computational modeling and simulation in the design process, it saw the new regulations as an opportunity to leverage that technical experience to become the first ground vehicle device manufacturer to submit products for EPA certification though CFD.

“In the past, the EPA has never allowed certification by computer simulations alone—at least not in the trailer market,” said Nathan See, Principal Engineer Aerodynamics at SmartTruck. “Now, they’re starting to acknowledge and allow CFD for this, so that was a big deal for us and for the marketplace.”

But the task required new skills and more complicated models.

To ensure scientific accuracy, the EPA had specific requirements that the team needed to reproduce computationally. Realistic-looking tires with tread, hoses of compressed air in front of the tires, the general shape underneath the hood, and air coming through the radiator itself are some of the additions the team had to make in its initial simulations of a computational baseline vehicle.

The SmartTruck engineers then had to decide which parts to certify using the newly permitted computational approach. They selected the TopKit Aero product, consisting of the Aero Rain Guard (the roof piece) and Side Fairings, external plastic pieces that reduce drag on the sides and back of the trailer.

“The TopKit is essentially half of an aircraft wing,” See said. “It works by forcing the fast-moving air on the top and sides of the trailer to shoot into the parachute-like area of drag coming off the back, drastically reducing it. Things like this aren’t easily simulated in a scale model wind tunnel.”

The engineers needed to introduce new modeling techniques to capture higher order physics to meet the rigorous EPA standards. SmartTruck could demonstrate its products’ performance precisely only through time-accurate unsteady analysis, a type of computational analysis that represents real-life conditions more reliably than the commonly used steady analysis. Steady-state analyses assume that a flow’s behavior will continue into the future and repeat itself, whereas unsteady analyses can factor in time, thereby solving for details that are impossible to capture using steady-state analysis alone. SmartTruck engineers had never before undertaken such an approach.

“The kinds of simulations we’ve done previously were nowhere near this complex,” See said. “It was like going from grade school to graduate school—a huge leap in technical demands for us.”

The company was faced with a computing challenge so great, it again needed high-performance computing (HPC) resources dramatically more powerful than what it had available internally.

From baseline to breakthrough

To conduct a full unsteady analysis of the TopKit Aero product, the engineers applied for time on the resources at the OLCF, which houses HPC resources available to users in industry, academia, and government. In 2017 the team was granted a Director’s Discretionary award through the Accelerating Competitiveness through Computational Excellence program, or ACCEL, to complete the simulations.

The engineers first created a computational baseline vehicle that included both tractor and trailer and the features that the EPA required to ensure they had a solid model from which to launch simulations of SmartTruck’s products.

The team used CFD to include a more complex numerical modeling of the physics than what is required for steady-state simulations. For time-accurate analysis, they needed to solve in the time domain across five different physics equations with additional turbulence equations.

Running first a half model truck—cut down the middle—and then a full model truck with the same physics, they guaranteed the accuracy of the baseline model compared with the real world.

“This series of iterations was critical to helping us adapt the flow solver settings, the grid settings, and the geometry settings so that the baseline model actually represents what would happen in real life,” See said.

See and his team needed to use the largest grid size possible for their 3D simulations without changing the soundness of the physics. Calculating smaller grid cell sizes is more computationally intensive, but larger grid cell sizes can be less accurate, so finding a balance of both is essential for the efficient use of computing resources. After three different grid studies and more than 20 simulations, the team found a grid size for the baseline that ensured the solution was not dependent on this variable.

The team compared the baseline vehicle with the same model with the TopKit Aero product attached, using full unsteady time-accurate simulations that took weeks to run, even on OLCF resources. The engineers employed NASA’s FUN3D CFD code for the simulations, working alongside Eric Nielsen, software developer at NASA Langley Research Center, throughout the project. Specifically, Nielsen worked with See to adjust the settings for the FUN3D flow solver, which predicts the physics of the flow that occurs during simulations.

“Access to OLCF resources allowed us, for the first time, to complete an unsteady analysis of our products and capture the complex physics required by these new regulations,” said Semir Kapetanovic, Vice President Research & Engineering at SmartTruck.

Through the simulations, the team demonstrated a reduction in the parachute-like area of drag on the back of the truck. Also called the delta drag-area improvement, it is the main criterion used by EPA for certification and, in this case, equated to an approximate 6.6 percent reduction in drag and a roughly 4–5 percent increase in fuel efficiency. SmartTruck used these simulations and the delta drag-area improvement as proof of its compliance with Phase 2 regulations, becoming the first company to submit to EPA an aerodynamic device for certification through computational methods alone.

Simulations show the difference in airflow (blue) between the Class 8 tractor trailer CFD baseline vehicle (top) and parts-attached vehicle (bottom). The drag reduction effect is created through the manipulation of the base-wake behind the vehicle by SmartTruck’s TopKit Aero product (red). Video Credit: SmartTruck

“Using numerical simulation on OLCF resources instead of physical testing, we reduced the time to complete the certification process by 25 percent and reduced the cost by 75 percent,” Kapetanovic said. “Eventually, we will release the details of our methods and process to accelerate the adoption of simulation for certification of aerodynamic components.”

Because SmartTruck’s products often work as systems of parts that are interchangeable, each product set needs to be certified on its own. During simulations of the TopKit, the team discovered it would be a bit more challenging to certify some of its other components.

Although the drag on the back of the truck was straightforward to capture, the underneath of the trailer proved difficult to represent computationally.

“Once you get underneath the trailer or inside the tractor trailer gap, you have these small eddies, or vortices, that just make the flow chaotic,” See said. “They’re shooting off everything, they’re running into each other, they’re bouncing around—it’s a giant mess.”

This “mess” will require additional CFD simulations, some of which See is undertaking at the OLCF. Certifying components underneath the trailer, which capture and improve this slower airflow, is the company’s next step.

ORNL is managed by UT-Battelle for DOE’s Office of Science. The Office of Science is the single largest supporter of basic research in the physical sciences in the United States and is working to address some of the most pressing challenges of our time. For more information, please visit https://energy.gov/science/. —Rachel Harken