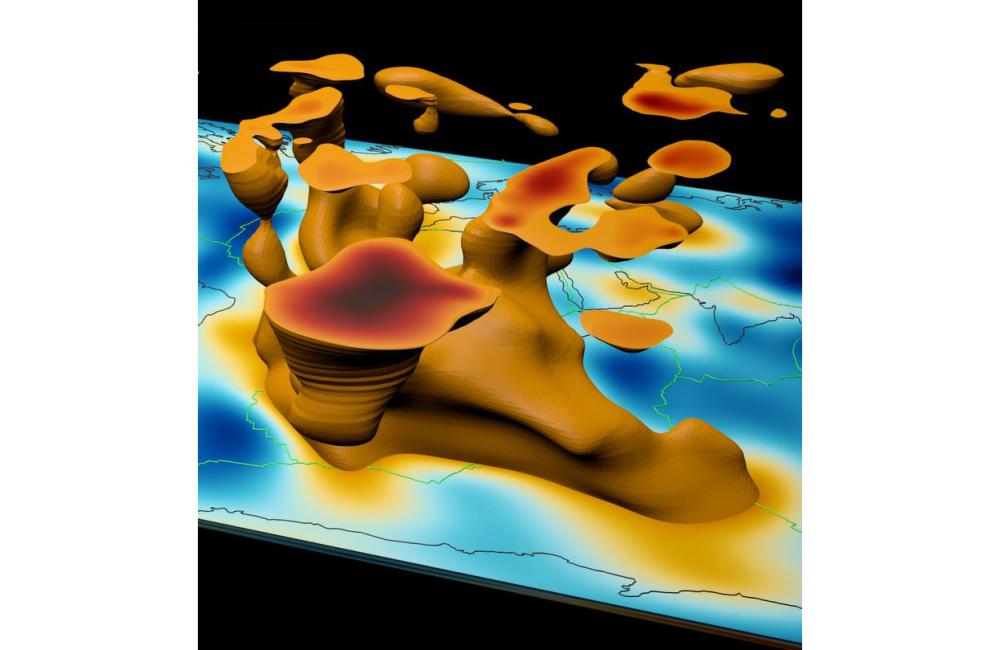 View a hi-res version of this image
A visualization of mantle plumes in the Eastern hemisphere overlaying a flat global map. Credit: David Pugmire, ORNL

March 28, 2017—When an earthquake strikes, the release of energy creates seismic waves that often wreak havoc for life at the surface. Those same waves, however, present an opportunity for scientists to peer into the subsurface by measuring vibrations passing through the Earth.

Using advanced modeling and simulation, seismic data generated by earthquakes, and one of the world’s fastest supercomputers, a team led by Jeroen Tromp of Princeton University is creating a detailed 3-D picture of Earth’s interior. Currently, the team is focused on imaging the entire globe from the surface to the core–mantle boundary, a depth of 1,800 miles.

These high-fidelity simulations add context to ongoing debates related to Earth’s geologic history and dynamics, bringing prominent features like tectonic plates, magma plumes, and hotspots into view. In September 2016, the team published a paper in Geophysical Journal International on its first-generation global model. Created using data from 253 earthquakes captured by seismograms scattered around the world, the team’s model is notable for its global scope and high scalability.

“This is the first global seismic model where no approximations—other than the chosen numerical method—were used to simulate how seismic waves travel through the Earth and how they sense heterogeneities,” said Ebru Bozdag, a coprincipal investigator of the project and an assistant professor of geophysics at the University of Nice Sophia Antipolis. “That’s a milestone for the seismology community. For the first time, we showed people the value and feasibility of running these kinds of tools for global seismic imaging.”

The project’s genesis can be traced to a seismic imaging theory first proposed in the 1980s. To fill in gaps within seismic data maps, the theory posited a method called adjoint tomography, an iterative full-waveform inversion technique. This technique leverages more information than competing methods, using forward waves that travel from the quake’s origin to the seismic receiver and adjoint waves, which are mathematically derived waves that travel from the receiver to the quake.

The problem with testing this theory? “You need really big computers to do this,” Bozdag said, “because both forward and adjoint wave simulations are performed in 3-D numerically.”

In 2012, just such a machine arrived in the form of the Titan supercomputer, a 27-petaflop Cray XK7 managed by the US Department of Energy’s (DOE’s) Oak Ridge Leadership Computing Facility (OLCF), a DOE Office of Science User Facility located at Oak Ridge National Laboratory. After trying out its method on smaller machines, Tromp’s team gained access to Titan in 2013. Working with OLCF staff, the team continues to push the limits of computational seismology to deeper depths.

As quake-induced seismic waves travel, seismograms can detect variations in their speed. These changes provide clues about the composition, density, and temperature of the medium the wave is passing through. For example, waves move slower when passing through hot magma, such as mantle plumes and hotspots, than they do when passing through colder subduction zones, locations where one tectonic plate slides beneath another.

Each seismogram represents a narrow slice of the planet’s interior. By stitching many seismograms together, researchers can produce a 3-D global image, capturing everything from magma plumes feeding the Ring of Fire, to Yellowstone’s hotspots, to subducted plates under New Zealand.

This process, called seismic tomography, works in a manner similar to imaging techniques employed in medicine, where 2-D x-ray images taken from many perspectives are combined to create 3-D images of areas inside the body.

In the past, seismic tomography techniques have been limited in the amount of seismic data they can use. Traditional methods forced researchers to make approximations in their wave simulations and restrict observational data to major seismic phases only. Adjoint tomography based on 3-D numerical simulations employed by Tromp’s team isn’t constrained in this way. “We can use the entire data—anything and everything,” Bozdag said.

To improve its global model further, Tromp’s team is experimenting with model parameters on Titan. For example, the team’s second-generation model will introduce anisotropic inversions, which are calculations that better capture the differing orientations and movement of rock in the mantle. This new information should give scientists a clearer picture of mantle flow, composition, and crust–mantle interactions.

Additionally, team members Dimitri Komatitsch of Aix-Marseille University in France and Daniel Peter of King Abdullah University in Saudi Arabia are leading efforts to simulate higher-frequency seismic waves. This would allow the team to model finer details in the Earth’s mantle and even begin mapping the Earth’s core.

“With Summit, we will be able to image the entire globe from crust all the way down to Earth’s center, including the core,” Bozdag said. “Our methods are expensive—we need a supercomputer to carry them out—but our results show that these expenses are justified, even necessary.”