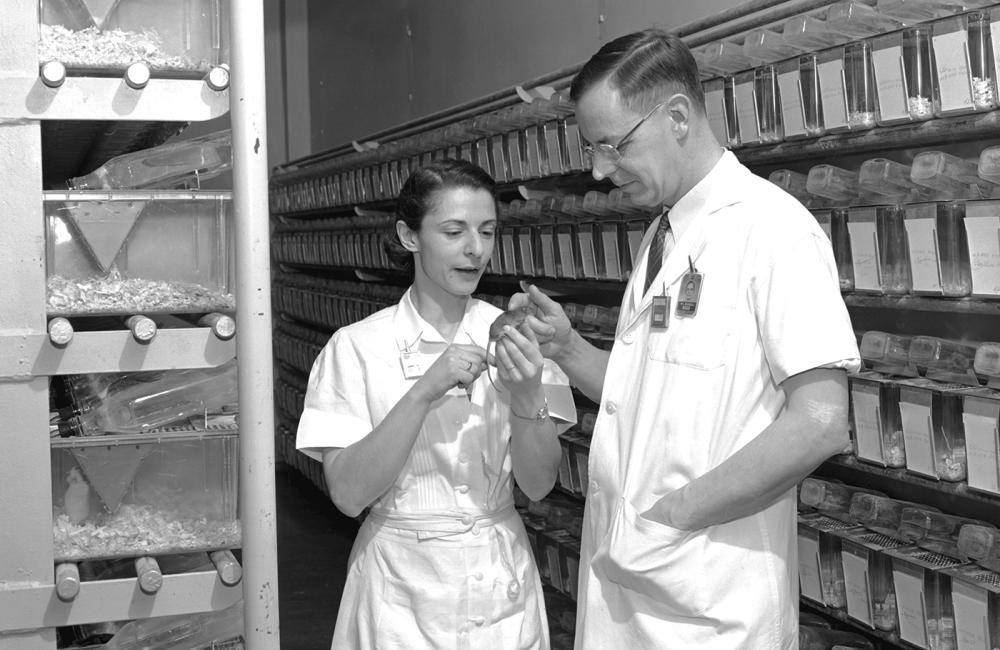 View a hi-res version of this image
Mammalian geneticists William and Liane Russell inspect a research mouse in ORNL's “Mouse House” in the 1950s. Their early work is being credited for its contributions to a recent Royal Swedish Academy award.

January 25, 2017 – The famed mouse colony once housed at the Department of Energy's Oak Ridge National Laboratory had a prominent role in groundbreaking autoimmune disease research recently recognized with an award from the Royal Swedish Academy of Sciences. 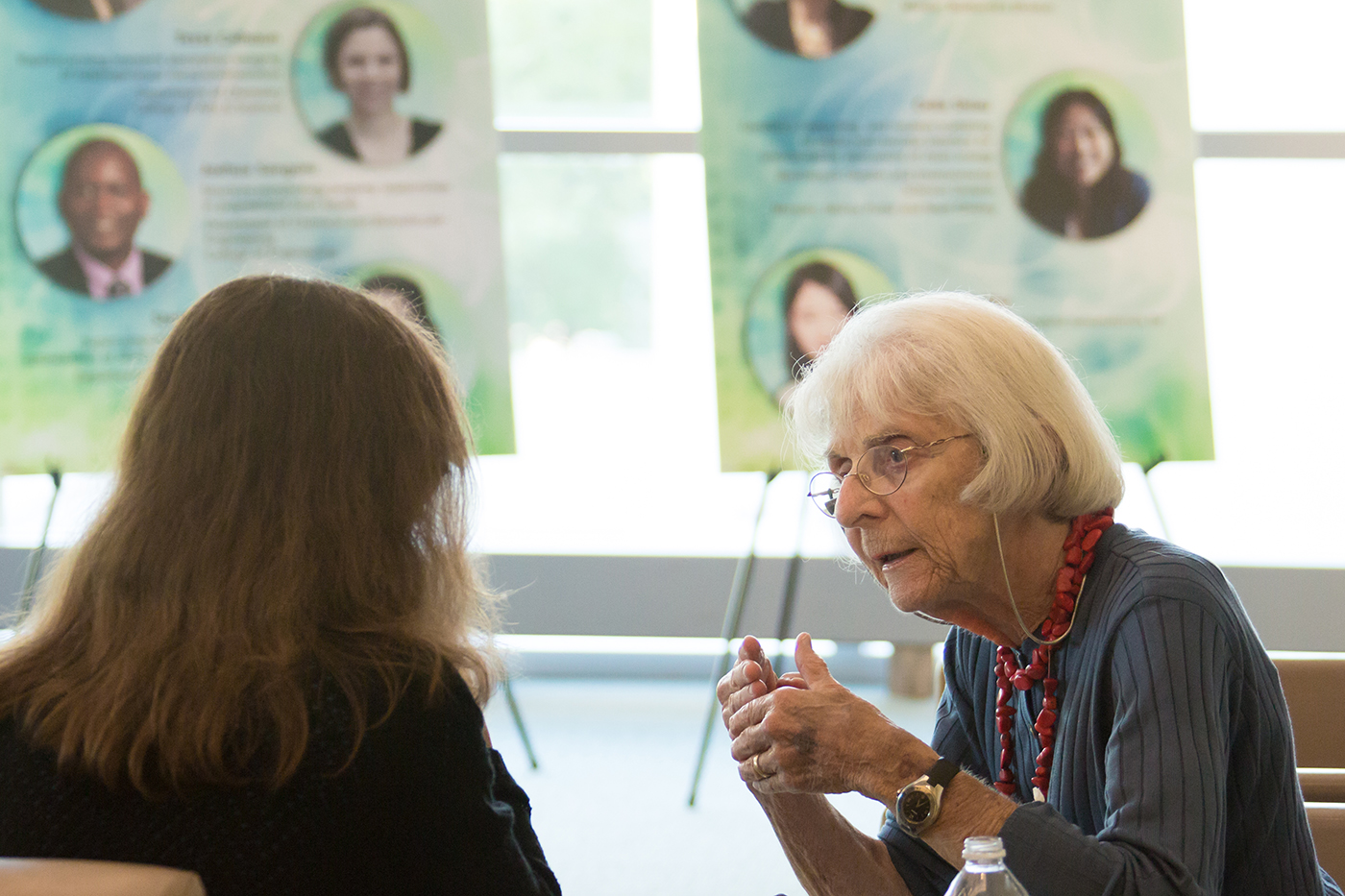 A colleague and senior collaborator of Ramsdell’s, David Galas, currently with the Pacific Northwest Research Institute, noted in a letter applauding Ramsdell's award that the “crucial piece of evidence” for their work in identifying a gene critical to regulating immune responses  was a mutant mouse strain from ORNL's mammalian genetics program, popularly known as the “Mouse House.”

Galas noted the mutation was identified in the early years of the ORNL mutant mouse colony, which was initially established in the late 1940s to study the genetic effects of radiation exposure. The program concluded in 2009.

Galas credited William (Bill) and Liane (Lee) Russell, who led the award-winning mammalian genetics program at ORNL, with identifying the importance of and maintaining the spontaneous mutant strain – called “scurfy” – for decades. The Russells observed that the mutation affected male mouse offspring, which soon died of uncontrolled immune response. That suggested it was a mutation in the sex-linked X chromosome.

“With remarkable patience and foresight, they bred this strain for over 40 years. It is still unclear to me how they had the intuition to know that this was an important biological effect and therefore could lead to an important gene,” Galas wrote.

Galas, Ramsdell and their colleagues marshalled an effort that led to the mapping, cloning and identification of a gene that was soon recognized as of critical importance in the future of immunology. Using the ORNL mutant strain, the research group led by Ramsdell identified the mutated gene in the scurfy mouse – the FOXP-3 gene – that controls the key genes of regulatory T-cells and thereby regulates the body's immune responses.

In an email exchange with Galas following the award, Liane Russell said the identification of the scurfy mouse mutation led to a number of Mouse House discoveries. “Scurfy was indeed an ORNL discovery, perhaps the first one. Not only was it the first sex-linked mutant found in the mouse, but it also played a major role in our findings of the 'single active X chromosome' and sex determination,” Russell said.

In the 1980s, Russell added, the Mouse House veterinarian, Dr. Virginia Godfrey, performed clinical studies on the scurfy mutant that implicated the role of T-cells.

By then ORNL's mammalian genetics program was known throughout the research community. Galas, who is a former director of DOE's Office of Health and Environmental Research, approached ORNL in the mid-1990s for strains that might be relevant to regulating the immune response.  The role of a new kind of T-cell, regulatory T-cells, in controlling the strength and duration of the immune responses was just being suggested, he said.

“I knew the mammalian genetics center there very well. It was one of the best in the country at the time, with a long and distinguished history, and while Bill was retired by then, Lee Russell was still active and engaged,” Galas wrote.

“The discovery of the scurfy gene has become a central part of understanding regulatory T-cells and therefore of how the immune system works,” Galas said.

Autoimmune diseases include multiple sclerosis, type 1 diabetes, polyarthritis (or rheumatic arthritis) and others, and are all affected by the action of these regulatory cells. The Crafoord prize recognizes the research that opened the understanding of these cells.

The Russells were both National Academy of Science members and recipients of the Enrico Fermi Award for their groundbreaking mammalian genetics research, which led to numerous human-health related advances including the development of occupational radiation dose limits and the sex-determining role of the Y chromosome. ORNL established the Liane B. Russell Fellowship in 2013 to attract early career scientists with research interests in the biological, environmental and information sciences.

ORNL is managed by UT-Battelle for the Department of Energy's Office of Science, the single largest supporter of basic research in the physical sciences in the United States. DOE’s Office of Science is working to address some of the most pressing challenges of our time. For more information, please visit energy.gov/science. – Bill Cabage