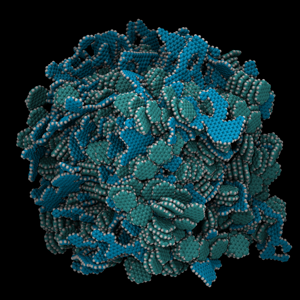 September 16, 2014 — When Orlando Rios first started analyzing samples of carbon fibers made from a woody plant polymer known as lignin, he noticed something unusual. The material’s microstructure -- a mixture of perfectly spherical nanoscale crystallites distributed within a fibrous matrix -- looked almost too good to be true.

“I thought, this looks like a material that people would go through a lot of work modifying graphite to make it look this way,” said Rios, a materials scientist at the Department of Energy’s Oak Ridge National Laboratory.  “It had a really distinct microstructure from any other graphite I’d seen.”

Rios and his colleagues soon realized the lignin fiber’s unique structure could make it useful as a battery anode, potentially improving upon graphitic materials found in most lithium-ion batteries. Lignin, a low-cost byproduct of the pulp, paper and biofuels industries, could be transformed into a cheaper version of highly engineered graphite through a simple and industrially scalable manufacturing process.

“We start with the fibers when they’re in a polymer state and then fuse them together by essentially melting and burning them,” Rios said. “Then you have a structure that looks like a mat or piece of paper. You can take this material, place it in a battery and you’re done. It’s ready to go.”

Initial testing of the lignin-derived battery showed promising results in terms of capacity and cycling stability, but the researchers wanted to understand how and why the material behaved so differently from other graphites.  Rios began collaborating with the University of Tennessee’s Computational Materials Group, led by David Keffer, to further examine the fibers’ structure and behavior.

“There aren’t many techniques we can use to study these unique materials made of crystalline domains within an amorphous matrix,” said UT’s Nicholas McNutt, a graduate student in Keffer’s group. “We wanted to tie together some of Oak Ridge National Lab’s best resources -- neutrons and computers -- and see what we could do.”

The team ran neutron scattering experiments at ORNL’s Spallation Neutron Source (SNS) to analyze how lignin-based fiber samples reacted with lithium. The SNS is a DOE Office of Science user facility that provides the most intense pulsed neutron beams in the world for scientific research and industrial development.

Using the neutron data, the team developed computational models and ran simulations on supercomputers including the Oak Ridge Leadership Computing Facility’s (OLCF) Titan, supported by DOE’s Office of Science, and UT’s Kraken, supported by the National Science Foundation. The team detailed its approach in the Journal of Applied Crystallography.

“Our models allow us to take experimental neutron scattering data and predict things about the local atomic structure,” McNutt said. “We are using computation to understand experimental data in a way that you couldn’t do before.”

The initial combination of neutron experiments and simulation gave the UT-ORNL team a first glimpse into how the material’s structure affects its overall performance. Now that they have confirmed their model’s accuracy, the researchers plan on applying the technique to how the material’s structure changes with and without added lithium, mimicking the charging and discharging cycles of a real battery.

“The most useful aspect of simulation is that we can see exactly what the lithium is doing in these structures,” McNutt said. “If we can see where it’s stored, how much of it is stored, what area of the structure it diffuses through, we can basically figure out all the reasons that make these low-cost materials high-performance. Once we know that, we can help guide the manufacturing process.”

McNutt was supported by the Oak Ridge Associated Universities High Performance Computing Program, UT’s Sustainable Energy Education and Research Center and the National Science Foundation. This research project used resources of the National Institute for Computational Sciences supported by NSF. The research was also sponsored in part by ORNL’s Laboratory Directed Research and Development Program.  Both SNS and OLCF are DOE Office of Science user facilities.