Porter Bailey: The art of REDC — and knowing when to go 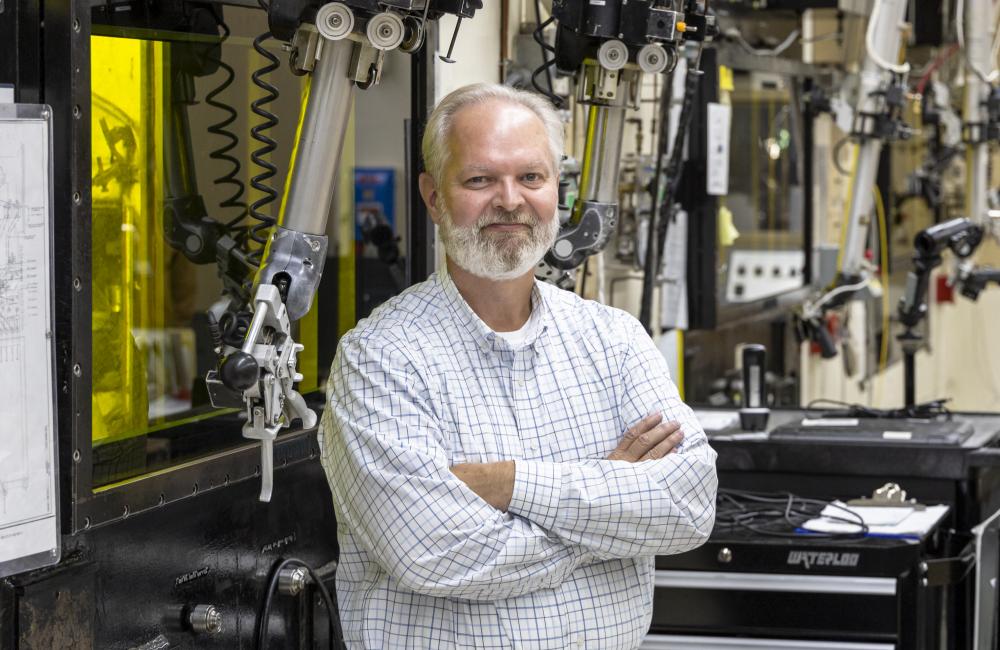 Porter Bailey, who will retire as operations manager for the Radiochemical Engineering Development Center Jan. 1, says he never lost his love for hot cell work — the job he came to ORNL to do 33 years ago. Bailey’s last day on site is Dec. 18. Credit: Carlos Jones/ ORNL, US Dept. of Energy

Porter Bailey started and will end his 33-year career at the Department of Energy’s Oak Ridge National Laboratory in the same building: 7920 of the Radiochemical Engineering Development Center.

A Northeast Tennessee native, he came to ORNL after completing his associate of science degree in chemical technology at Tri-Cities State Technical Institute to be a technician on REDC’s operations shift.

“Coming here, looking at all the hot cells, the chemical make-up area and manipulators, I was thinking, ‘There is no way I am going to learn all this stuff,’” Bailey said. “Now it’s like second nature.”

Even after moving to shift supervisor and then to operations manager, the position from which he’ll retire Jan. 1, Bailey never lost his fascination with — and respect for — the art of using the manipulators to perform delicate work critical to the national mission.

“My love is still the hot cell work — the stuff I did as a tech,” he said.

But now it’s time for him to focus on another type of art he’s somewhat neglected during his career years: sculpture and painting. Once a prolific artist, when he had the time, he plans to do more of both after his last official day on campus, Dec. 18. Also on his retirement to-do list: playing golf, spending time with his granddaughter, and, when it’s safe again, traveling — domestically and to Europe — with wife Karen, herself recently retired from ORNL.

Bailey said he’d always planned to retire in his 50s if possible, after watching his father do the same. Still, now that the time has come, he finds it bittersweet.

“This has been a huge part of my life for so many years,” Bailey said. “The capabilities that they have here are like nowhere else in the world. It’s something different that not many people get the opportunity to do.”

Being part of everything from the californium-252 program, one of the reasons REDC was originally constructed in the 1960s, to newer programs such as processing plutonium-238, has given Bailey a unique perspective on the variety of challenges REDC — and its trained staff — can tackle.

“I got to see a lot, and I got to do a lot,” he said. “Some of the shift work we do, campaign-wise, you don’t get to see the whole thing at once. It could be a year or two before you get to participate in the entire process.”

When he was given the opportunity to be operations manager 14 years ago, he was proud to follow in the footsteps of his own mentor, Fred Chattin.

“That role is a lot like being a parent,” Bailey said. “It’s challenging, rewarding, exciting and frustrating — sometimes all in the same day.”

Yet his own experience as a shift worker gave him respect for and understanding of the shift crews, who work around the clock weekdays and weekends alike, often making critical decisions at 1 or 2 a.m.

Bailey had the chance to work with “first-generation” staffers in the 1980s, the people who helped develop and refine REDC’s programs. Then, as a manager, he had the opportunity to hire shift technicians who have gone on to other research and supervisory roles.

“I’ve grown this garden of staff members to ensure REDC’s viability for many years to come,” Bailey said.

It’s one of his most gratifying accomplishments, along with being credited as one of the members of the team that discovered the element 117 tennessine and being given an award for mission support at ORNL’s annual awards night in 2016.

“I was blown away,” Bailey said. “That was one of my proudest moments.”

“When I look at some of the things we’ve accomplished, it’s been pretty neat to be a part of that,” he said.

Bailey is pleased to have been here long enough to see a resurgence in isotope work at ORNL, after some “lean years.” What he’ll miss most, he said, is “people interaction,” building and maintaining relationships.

“This is one of the most challenging facilities at ORNL, and I’ve spent my entire career here,” Bailey said. “I’ve always thought it of kind of like my ship; I wanted to make sure everything is running smoothly. But I’m the senior guy now. It’s time to go.”