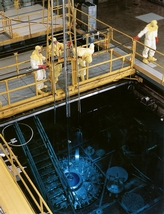 February 28, 2013 — The Department of Energy's Oak Ridge National Laboratory - home of one of only two reactor facilities in the world capable of producing californium-252 (Cf-252) - has begun implementing a new six-year contract between the DOE Isotope Program and industry to make this unique and versatile radioisotope.

The new contract follows the successful completion of a four-year Cf-252 program under an agreement with a consortium of industries that use the neutron emitting radioisotope for a number of applications that focus mostly on analysis, detection and nuclear energy.

"Californium-252 serves as a unique, portable neutron source," said Julie Ezold, who manages ORNL's Cf-252 production program. "A cross-cut of industries including coal, oil and mineral companies rely on it for critical applications, and it is used in defense and national security applications."

The radioisotope is critical to a number of energy and security related tasks. The coal industry uses Cf-252's neutron emissions to detect impurities in coal; the construction industry performs similar analysis on cement. The oil industry sends the radioisotope down well shafts to determine the well's potential productivity. Cf-252 is also used to calibrate radiation detection instruments including those used in worldwide port security operations. The powerful neutron emitter is also used to start up dormant naval and commercial nuclear reactors.

ORNL's High Flux Isotope Reactor (HFIR) is one of only two reactors in the world with sufficient neutron production, or "flux," to irradiate curium targets to produce Cf-252. The irradiated targets are then processed in the adjoining hot cells at the Radiochemical Engineering and Development Center (REDC).

The only other facility capable of producing Cf-252 is in Dimitrovgrad, Russia. Cf-252 produced at ORNL supplies approximately 70 percent of global demand for the material.

Cf-252 results from a complex process that begins with the irradiation of a curium target in HFIR, followed by several steps involving chemical processing and purification at the REDC and fabrication of new curium targets. The process includes the production of several precursor radioisotopes; in fact, the Cf-252 program enabled the production of the berkelium-249 used in the U.S.-Russia collaboration that discovered element 117, announced in 2010.

"With HFIR, REDC and the unique nuclear engineering capabilities they provide, the DOE Isotope Program is able to supply a global, billion-dollar industry with a critical material," Ezold said. "This one-of-a-kind direct contract with industry makes possible work that is important to our energy sector and to global security."

DOE's Office of Science is the single largest supporter of basic research in the physical sciences in the United States, and is working to address some of the most pressing challenges of our time. For more information, please visit energy.gov/science. 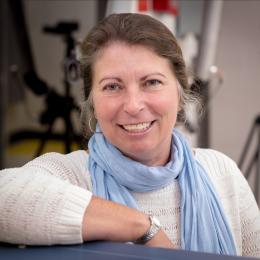