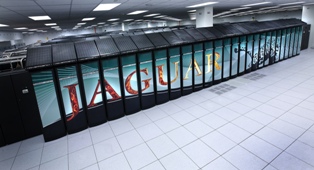 November 16, 2009 — An upgrade to a Cray XT5 high-performance computing system deployed by the Department of Energy has made the "Jaguar" supercomputer the world's fastest. Located at Oak Ridge National Laboratory, Jaguar is the scientific research community's most powerful computational tool for exploring solutions to some of today's most difficult problems. The upgrade, funded with $19.9 million under the Recovery Act, will enable scientific simulations for exploring solutions to climate change and the development of new energy technologies.

To net the number-one spot on the TOP500 list of the world's fastest supercomputers, Jaguar's Cray XT5 component was upgraded this fall from four-core to six-core processors and ran a benchmark program called High-Performance Linpack (HPL) at a speed of 1.759 petaflop/s (quadrillion floating point operations, or calculations, per second). The rankings were announced today in Portland at SC09, an international supercomputing conference.

In 2004, DOE's Office of Science set out to create a user facility that would provide scientists with world-leading computational research tools. One result was the Oak Ridge Leadership Computing Facility, which supports national science priorities through the deployment and operation of the most advanced supercomputers available to the scientific community.

"Our computational center works closely with the science teams to effectively use a computer system of this size and capability," said James Hack, director of the National Center for Computational Sciences that houses Jaguar in the Oak Ridge Leadership Computing Facility.

Jaguar began service in 2005 with a peak speed of 26-teraflop/s (trillion calculations per second) and through a series of upgrades in the ensuing years gained 100 times the computational performance. The upgrade of Jaguar XT5 to 37,376 six-core AMD Istanbul processors in 2009 increased performance 70 percent over that of its quad-core predecessor.

Researchers anticipate that this unprecedented growth in computing capacity may help facilitate improved climate predictions, fuel-efficient engine designs, better understandings of the origin of the universe and the underpinnings of health and disease, and creation of advanced materials for energy production, transmission, and storage.

The Oak Ridge computing complex is home to two petascale machines. In addition to DOE's Jaguar system, the National Institute for Computational Sciences, a partnership between the University of Tennessee and ORNL, operates another petascale Cray XT5 system known as Kraken, which was ranked 3rd on the November Top500 list at a speed of 831.7 teraflops.

"The purpose of these machines is to enable the scientific community to tackle problems of such complexity that they demand a well tuned combination of the best hardware, optimized software, and a community of researchers dedicated to revealing new phenomena through modeling and simulations" said ORNL Director Thom Mason. "Oak Ridge is proud to help the Department of Energy address some of the world's most daunting scientific challenges."

Simulations on Jaguar have primarily focused on energy technologies and climate change resulting from global energy use. Scientists have explored the causes and impacts of climate change, the enzymatic breakdown of cellulose to improve biofuels production, coal gasification processes to help industry design near-zero-emission plants, fuel combustion to aid development of engines that are clean and efficient, and radio waves that heat and control fuel in a fusion reactor.

Hack, a leading climate modeler, concurs. "The speed and power of petascale computing enables researchers to explore increased complexity in dynamic systems," he said. As an example he cited the world's first continuous simulation showing abrupt climate change, led by scientists at the University of Wisconsin and the National Center for Atmospheric Research. Run on Jaguar earlier this year, the computer's speed made it possible to publish the results by July in Science.

Scientists in industry, academia, and government have requested more than 2 billion processor hours on Jaguar for 2010. The six-core upgrade on Jaguar will enable Oak Ridge to allocate 1 billion processor hours. Equipped with unprecedented computer power, materials scientists can simulate superconducting materials and magnetic nanoparticles with greater realism. Climate scientists can improve accuracy, resolution, and complexity of Earth system models, and physicists can simulate quarks and explore masses, decays, and other properties of the fundamental constituents of matter.

Oak Ridge National Laboratory is managed by UT-Battelle for the Department of Energy.