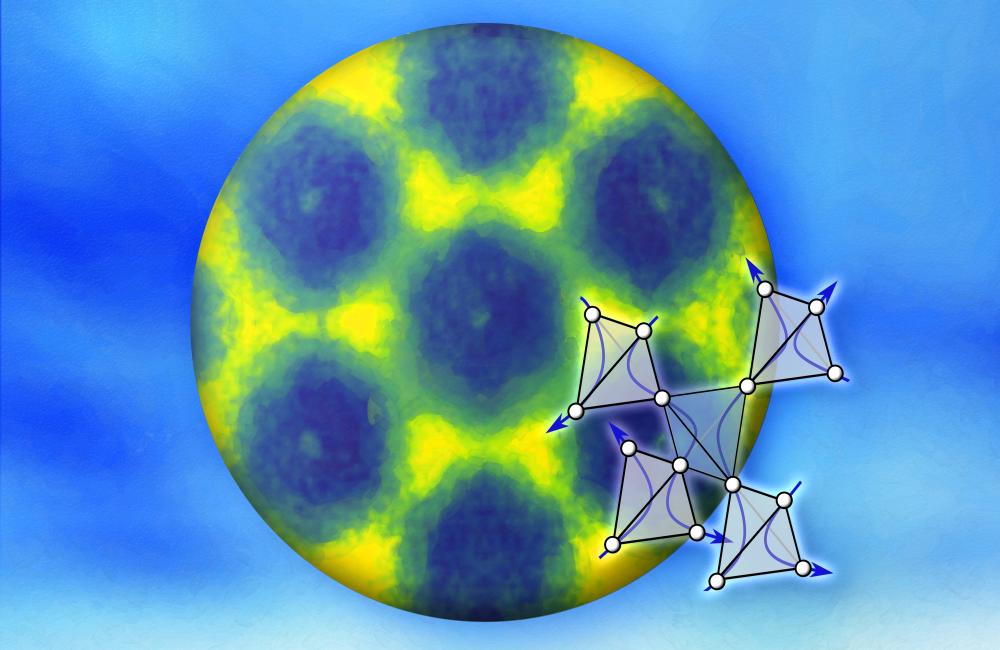 View a hi-res version of this image
Neutrons reveal a striking pattern of connected “bow ties” that is characteristic of the emergent electron motion in the quantum spin liquid state, observed in a three-dimensional material belonging to a class of minerals used in a wide range of technological applications. Credit: Kemp Plumb/Brown University and Genevieve Martin/Oak Ridge National Laboratory, U.S. Dept. of Energy
Topic: Neutron Science

January 8, 2019—Researchers used neutron scattering at Oak Ridge National Laboratory’s Spallation Neutron Source to investigate bizarre magnetic behavior, believed to be a possible quantum spin liquid rarely found in a three-dimensional material. QSLs are exotic states of matter where magnetism continues to fluctuate at low temperatures instead of “freezing” into aligned north and south poles as with traditional magnets. “If you could shrink down to see what individual electrons are doing, it would seem as though nothing special was going on,” said Kemp Plumb of Brown University. “But, when you zoom out, a beautiful collective pattern emerges signifying a new phase of matter that hasn’t been seen before.” Observations of the material’s quantum behavior are consistent with the theoretical models. This indicates the material has the right ingredients for fractionalized magnetic excitations that could be harnessed for future quantum information technologies. The research was published in Nature Physics.