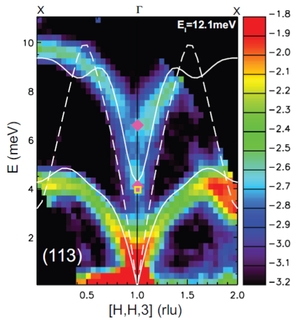 June 6, 2011 — Neutron analysis of the atomic dynamics behind thermal conductivity is helping scientists at the Department of Energy's Oak Ridge National Laboratory gain a deeper understanding of how thermoelectric materials work. The analysis could spur the development of a broader range of products with the capability to transform heat to electricity.

Researchers performed experiments at both of ORNL's neutron facilities -- the Spallation Neutron Source and the High Flux Isotope Reactor -- to learn why the material lead telluride, which has a similar molecular structure to common table salt, has very low thermal conductivity, or heat loss -- a property that makes lead telluride a compelling thermoelectric material.

"The microscopic origin of the low thermal conductivity is not well understood. Once we do understand it better we can design materials that perform better at converting heat to electricity," said Olivier Delaire, a researcher and Clifford Shull Fellow in ORNL's Neutron Sciences Directorate.

Delaire's research, reported in Nature Materials, shows that an unusual coupling of microscopic vibrational modes, called phonons, is responsible for the disruption of the dynamics that transport the thermal energy in lead telluride.

In typical crystalline materials, which have a lattice-like atomic structure, the conduction of heat is enhanced by the propagation of phonons along the lattice. The atoms conduct heat by vibrating in a chain, similar to vibrations propagating along a spring.

Delaire's team determined through analysis at the SNS that lead telluride, although having the same crystal lattice as rock salt, exhibits a strong coupling of phonons, which results in a disruption of the lattice effect and cancels the ability to conduct heat.

"The resolution of the SNS's Cold Neutron Chopper Spectrometer, along with the high flux, have been quite important to making these time of flight measurements," Delaire said.

By controlling thermal conductivity in thermoelectrics, less energy is dispersed and more heat can be directed to power generation. Today, thermoelectric materials are used to power the deep-space probes that explore the outer planets and solar system. Cruising beyond the range of solar collectors, the crafts' reactor thermoelectric generators use heat from decaying radioisotopes to generate power.

The work was funded by DOE's Office of Science as part of the Solid-State Solar-Thermal Energy Conversion Center (S3TEC) Energy Research Frontier Center.