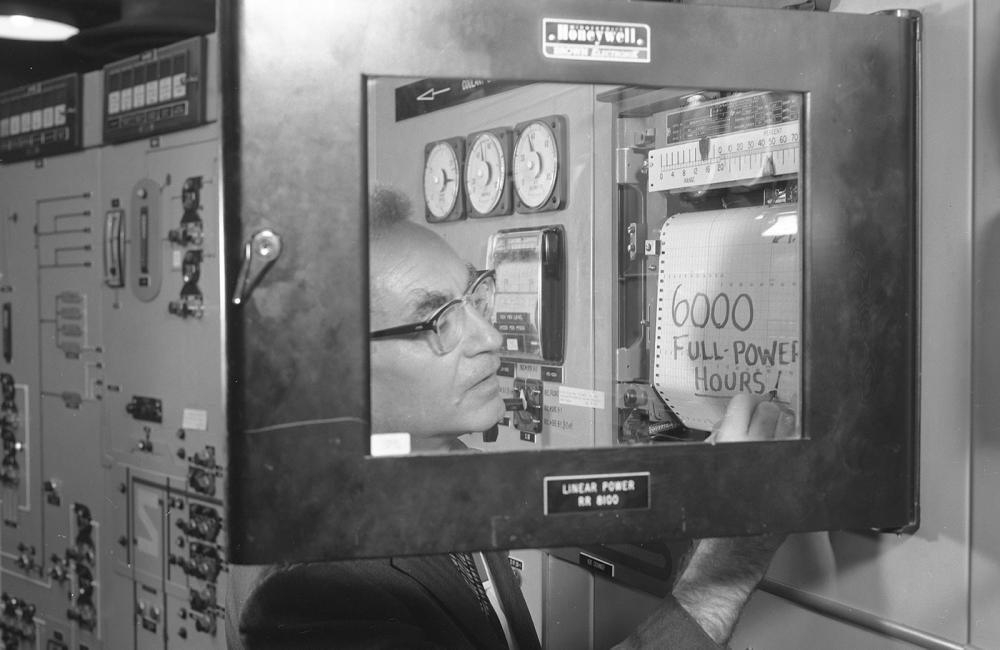 View a hi-res version of this image
Alvin Weinberg, then the director of Oak Ridge National Laboratory, marks 6000 power hours performance of his brainchild, the Molten Salt Reactor Experiment, in October 1967.

The short-lived Molten Salt Reactor Experiment is far from forgotten

October 15, 2015 – The Molten Salt Reactor Experiment (MSRE), which ran a brief four years in the 1960s but earned an enduring legacy as an innovative reactor technology concept, this year marks a half century since its June 1965 startup.

A workshop on molten salt reactor technologies, "From the MSRE to a New Emerging Class of Reactors 50 Years Later," is being held October 15-16 at the Department of Energy's Oak Ridge National Laboratory, which developed the reactor.

Located a valley over from the laboratory's main campus, the MSRE was inspired by the campaign to build a nuclear-powered aircraft in the 1950s. Engineers saw promising results from a design that used molten fluoride salt as a fuel carrier and coolant for an onboard reactor.

By the early 1960s, after the nuclear airplane project's cancellation, molten salt reactor efforts had transitioned to electricity generation.

The potential for molten salt reactors to work as breeder reactors attracted early proponents:  Worries about the supply of uranium at the time appeared to disqualify nuclear as a large-scale energy source. A molten-salt breeder reactor could make fuel as it operated, and the circulating fuel eliminated the need for solid-fuel changeouts and fuel- and control-rod mechanisms.

The concept also had the allure of intrinsic safety.  Molten salts expand as they heat up.  The expansion causes some of the fuel to leave the core, shutting down the reactor, so operator response is not required to turn the reactor off.

Former ORNL Director Alvin Weinberg was a staunch proponent of liquid-fuel breeder reactors, and the MSRE was his crowning glory, successfully operating from January 1965 to December 1969 with a variety of fuel configurations.

"Here we had a high-temperature fluid-fuel reactor that operated reliably and, even in the primitive embodiment represented by MSRE, had remarkably low fuel costs," Weinberg wrote in The First Nuclear Era.

The "salt" that carried the MSRE's fuel was a mixture of the fluorides of lithium-7, beryllium and zirconium with a melting point of 840º F. The fuel-laden salt flowed from the reactor's graphite-moderated core to a heat exchanger that transferred heat to another molten fluoride salt system, which carried the heat to an air-cooled radiator.

The reactor and the parts of the system that came in contact with the fiery-hot loops of circulating molten salt were made of nickel-based INOR-8, which ORNL helped develop. It's now called Alloy N and has been available commercially for 50 years in industry, representing an early example of the Lab's materials research and commercialization prowess.

Construction on the MSRE began in 1962. Test runs began in 1965 using uranium-235 as a fuel. The reactor reached full power in 1966, and operators enjoyed progressively longer runs following some initial hiccups.

In 1968, an amount of uranium-233 was added to the fuel salt to demonstrate the design's flexibility. Renowned physicist and Atomic Energy Chairman Glenn Seaborg, who led the team that created the first amounts of U-233, came to ORNL to start the reactor. The MSRE group also experimented with plutonium in the fuel salt.

Some problems arose, such as surface cracking in the Alloy N caused by fission products, but they were manageable and for the most part eventually solved.

Weinberg described the MSRE's design as "primitive," but to a layman it is complex, with its intricately engineered pump systems and complicated chemistry. It was far different from other reactors, which proved to be a disadvantage because the MSRE also had competition: The AEC was committed to sodium-cooled, "fast breeder" designs while light-water, solid-fuel reactors eventually were adopted by the nuclear power industry. The MSRE lost funding and the entire program was shut down in 1973.

The reactor has been dormant ever since. In the early 1990s, reactions from the stored fuel triggered alarms in the facility, putting the MSRE briefly in the news. The facility has remained in stable repose under the purview of DOE’s Office of Environmental Management.

At this month’s ORNL workshop, researchers and guest speakers will describe the status of molten salt reactor designs and honor veterans of the original MSRE, which was designated by the American Nuclear Society as a Nuclear Historic Landmark in 1994. Scheduled speakers include John Kotek, DOE Office of Nuclear Energy Acting Assistant Secretary, and energy company representatives including Steve Kuczynski, president and CEO of Southern Nuclear; Andrew Shaw of Hatch; Jeff Latkowski of Terrapower; and David LeBlanc of Terrestrial Energy.

UT-Battelle manages ORNL for the Department of Energy’s Office of Science. The Office of Science is the single largest supporter of basic research in the physical sciences in the United States, and is working to address some of the most pressing challenges of our time. For more information, please visit http://energy.gov/science/