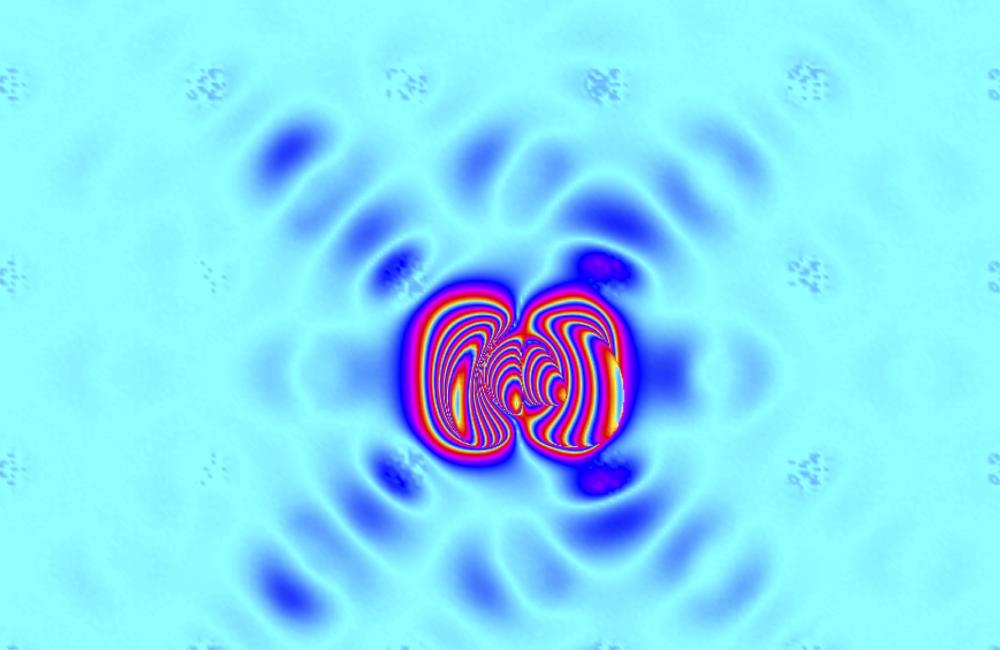 View a hi-res version of this image
Redistribution of electronic clouds causes a lattice instability and freezes the flow of heat in highly efficient tin selenide. The crystal lattice adopts a distorted state in which the chemical bonds are stretched into an accordion-like configuration, and makes an excellent thermoelectric because heat propagation is thwarted. Image credit: Oak Ridge National Laboratory, U.S. Dept. of Energy
Topic: Materials

OAK RIDGE, Tenn., Oct. 19, 2015—Engines, laptops and power plants generate waste heat. Thermoelectric materials, which convert temperature gradients to electricity and vice versa, can recover some of that heat and improve energy efficiency. A team of scientists at the Department of Energy’s Oak Ridge National Laboratory explored the fundamental physics of the world’s best thermoelectric material—tin selenide—using neutron scattering and computer simulations. Their new understanding of the origin of atomic dynamics in this material, published in Nature Physics, may aid research in energy sustainability and enable the design of materials that efficiently convert heat into electricity.

“We performed the first comprehensive measurements of atomic vibrations in this important new thermoelectric material,” said senior author Olivier Delaire in ORNL’s Materials Science and Technology Division. “We discovered the origin of its very low thermal conductivity, which leads to its high efficiency.” It turns out unusual atomic vibrations help prevent “heat leaks,” maximizing the conversion into electricity.

Through the Seebeck effect, thermoelectric devices produce a voltage and generate electric current when a temperature differential is maintained. Or, when powered with an external electricity source, the devices can actively pump the heat out for refrigeration applications.

The ORNL researchers observed atomic vibrations that underpin heat flow—called phonons—and tried to understand their origins in terms of electronic structure and chemistry.

The key to tin selenide’s high efficiency was revealed through exploring the dynamics of atoms in the crystal lattice. In a harmonic system, waves of atomic vibrations can propagate freely. Many waves, carrying a lot of heat, can travel through the material without sensing each other. In an anharmonic system, in contrast, atomic vibration waves feel a viscous friction against each other. The friction creates a sort of slush that prevents heat propagation, much like the vibration dampers in a vehicle’s shock absorbers. Tin selenide at the temperatures tested was strongly anharmonic: The phonon waves were strongly damped and the heat was well contained, so the temperature gradient could be preserved.

Co-lead author Jiawang Hong, a postdoctoral fellow working with Delaire, ran quantum dynamics simulations at the OLCF using Eos, a Cray XC30 supercomputer. The simulations of phonon dispersions, when plugged into software developed by the team, showed good agreement with the neutron scattering measurements taken at the SNS and HFIR by co-lead author Chen Li, also a postdoctoral fellow on Delaire’s team. The paper’s other authors were Andrew May and Dipanshu Bansal of ORNL’s Materials Science and Technology Division and Songxue Chi, Tao Hong and Georg Ehlers of ORNL’s Quantum Condensed Matter Division.

“With simulations we showed the strong underlying anharmonicity stems from a bonding instability,” Delaire said. Below a phase transition of 810 kelvin (about 540 degrees C or 1000 degrees F), electronic orbitals spontaneously reorganize and the lattice assumes an accordion structure. Phonons feel this instability, which damps the oscillations—making tin selenide an outstanding thermoelectric material.

Fuller understanding of the fundamental principles that underpin useful properties could enable “materials by design.” “Out of all the energy that goes into the U.S. economy every year, 60 percent is lost in the form of waste heat,” Delaire said. “If you can recapture even a small fraction, you can have a big impact.”

Photovoltaic panels can be expensive, and many are needed to generate useful amounts of electricity. “With thermoelectric materials, once you have the temperature differential, you only need a comparatively small amount of material to produce the electricity,” Delaire said. “In thermoelectric devices, energy conversion is really a direct link because the material does all the work. There are no moving parts. It generates the voltage from a temperature gradient. So understanding and optimizing the materials is key.”

Thermoelectric materials still need to reach higher efficiencies for widespread application, but recent discoveries like understanding the dynamics of tin selenide have achieved big steps in that direction. They have already been big successes in niches including very long-lasting space batteries developed by NASA and DOE.

The title of the paper is “Orbitally driven giant phonon anharmonicity in SnSe.”

UT-Battelle manages ORNL for DOE’s Office of Science. The single largest supporter of basic research in the physical sciences in the United States, the Office of Science is working to address some of the most pressing challenges of our time.—by Dawn Levy