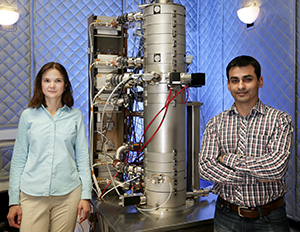 August 28, 2014 — Researchers at the Department of Energy’s Oak Ridge National Laboratory got a surprise when they built a highly ordered lattice by layering thin films containing lanthanum, strontium, oxygen and iron. Although each layer had an intrinsically nonpolar (symmetric) distribution of electrical charges, the lattice had an asymmetric distribution of charges. The charge asymmetry creates an extra “switch” that brings new functionalities to materials when “flipped” by external stimuli such as electric fields or mechanical strain. This makes polar materials useful for devices such as sensors and actuators.

The study’s biggest surprise, however, was how material defects induced the polar behavior. Defects are often detrimental to material properties, but these findings show they can provide a new mechanism for manipulating electricity, magnetism and other behaviors important for energy and information technologies.

The study showed oxygen atoms occupied parts of the lattice but vacated others, causing iron atoms to shift. Those small defect-driven shifts have big consequences for the physical properties of materials that hold promise for storing and manipulating data and sensing magnetic fields.

To create complex oxides, the scientists coated a substrate atomic layer by atomic layer. They added two layers of lanthanum ferrite (LaFeO3) followed by one layer of strontium ferrite (SrFeO3), and repeated the process to produce a film a few billionths of a meter in thickness. The multiple layers built a crystal “superlattice.” Its cells were identical except for the elements at their centers. The positively charged metal atom, or cation, was lanthanum in some cells but strontium in others.

“The fact that cations were not the same in different parts of the film made the oxygen atoms arrange themselves in a particular way. Some oxygens went missing. Those oxygen vacancies concentrated next to specific metal atoms,” explained Borisevich, who works in ORNL’s Materials Science and Technology Division. “Instead of a small cation sitting in the middle of bigger cations, it might sit a little to one side. Because all the cations in this lattice carry charge, their shifting induced electrical polarization.”

She compared shifts in the lattice to changes that happen in a popular game as players remove blocks from different floors of a tower: “In Jenga, sometimes when you take out a block, the tower doesn’t exactly collapse but twists around.”

The pursuit of imperfection
Before Borisevich and colleagues found that oxygen vacancies induce polar behavior, researchers thought of them as nuisances. They tried to develop methods to avoid oxygen vacancies. “What we’re saying is that doesn’t have to be the case,” Borisevich said. She and her collaborators now see the potential for turning a problem into an opportunity.

“Oxygen vacancies create a new knob,” said first author Rohan Mishra of Vanderbilt University, who is also a visiting scientist at ORNL. “If we can control them, we can get functional devices.”

Physical phenomena are tightly coupled in superlattices made from iron-containing materials. Changing magnetic properties, for example, alters linked electrical behavior, and changing one part of the system affects the entire system. “The parts all tie together,” Borisevich said. “If you touch one thing, you can topple other things.”

By embracing and manipulating an imperfection of iron-containing oxide materials, the researchers are taking a page from the playbook of the semiconductor industry, which exploits trace impurities called dopants. An added dopant can alter a substance’s electrical or optical properties. Dopant atoms commonly take the place of elements in the crystal lattices that make up silicon semiconductors used in solid-state electronics. In fact, diodes cannot be made of pure silicon; a dopant must be added.

“Silicon is in all our devices, but pure silicon is boring,” Mishra said. “Putting in defects and dopants is what makes silicon functional.”

Today oxide thin films are used in sensors, actuators, capacitors, insulators and random access memory devices. Tomorrow a better understanding of superlattice imperfections that impart functionalities could lead to novel devices. Mishra conjectured an example of a knob that someday may influence multiple properties with one twist: “Computers have both hard drives, which employ magnetism to store data, and processors, which use electricity to do the computing. If we have a material where we can change the magnetism using an electric field, it may be possible to do both data storage and computing in the same device.”

Reading atomic maps
To reach the conclusion that the chemical phenomenon of oxygen vacancies gave rise to the electrical phenomenon of polarization in an otherwise nonpolar material, the researchers had to see where all the atoms were. To map each atom in a superlattice and reveal where distortions arose, they used a powerful electron microscope at the Center for Nanophase Materials Sciences to study the thin films that were grown at the Center for Nanoscale Materials, which are DOE Office of Science User Facilities at Oak Ridge and Argonne national laboratories, respectively.

The researchers also used the Hopper and Edison supercomputers at the National Energy Research Scientific Computing Center, a DOE Office of Science User Facility at Lawrence Berkeley National Laboratory, for theoretical calculations of the forces and energies between up to 120 atoms at a time.

“The downside to having all those behaviors connected to each other is that experimentally you always get the whole package,” Borisevich said. “Theory gives us the possibility to decouple those behaviors and see what each of them does. Experiment can find correlation, but we need theory to check for causal relationships.”

The team is eager to further explore the uncharted territory of strongly correlated systems. “We have a lot of interest in the physics of oxygen vacancies and the new phenomena that they bring, so we are putting a lot of effort in this new direction,” Borisevich said. “This was a pretty exciting development in that sense. We’re also looking at different ways in which we can affect the oxygen atoms in the lattice and see if we can change other properties as a result.”

The findings were published in the American Chemical Society journal Nano Letters.