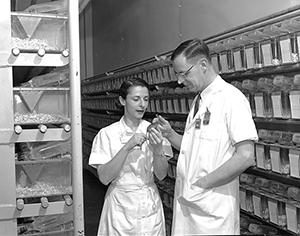 December 30, 2013 — Award-winning geneticist Liane Russell has written a history of Oak Ridge National Laboratory's fabled Mouse House, where she and husband William led a research program that charted significant advances in the field of mammalian genetics and mutagenesis.

The Mouse House was home to a large colony of of mice used to study the effects of radiation and chemicals on heredity and development, for research on the structure of the genome and to furnish mouse models for human genetic disorders.

The original Mouse House was located at the Y-12 Plant in Oak Ridge in a multistory structure originally built for Manhattan Project work. A new vivarium -- the William L. and Liane B. Russell Laboratory for Comparative and Functional Genomics -- opened on the ORNL campus a few years before the mammalian genetics program ended.

The Mouse House couldn't have a more authoritative historian than Liane Russell. She joined her husband in creating the Mouse House program and from day one established her own direction in mammalian genetics research. The ORNL program grew into a leading biological research center.

“When I began, the task looked truly daunting, because I wanted to cover at least a little of what all the other wonderful members of our section had accomplished.  Not only did this require a good deal of reading, but everybody’s research was interrelated in so many complex ways that it was hard to develop a structure for the account.  I hope I succeeded in this, at least to some extent," Russell said.

In the fall of 1947, shortly after the Russells had accepted the invitation of ORNL biology division founder Alexander Hollaender, a fire destroyed the Jackson Laboratory in Bar Harbor, Maine, where they had been working. Mice that would have provided foundation stocks for the Oak Ridge program perished in the fire.

Nevertheless, contributions to scientific knowledge and public health and safety soon followed the Russells’ arrival at ORNL. They were encouraged by Hollaender and, ultimately, the Atomic Energy Commission to investigate the potential health effects of radiation as the developing Cold War provoked concern about radioactive fallout.

William Russell's discovery of the factors that affect the frequency and nature of induced mutations provided critical information for setting occupational dose limits for humans. Liane's findings on the vulnerability of embryos to radiation led to drastic curtailment of pelvic X-rays in child-bearing women.

Among the most universally significant Mouse House discoveries were the male-determining role of the Y chromosome and the mode of activity of the X chromosome in mice and humans. The Mouse House's research team published important research on chronic radiation exposure as well as exposure to drugs, fuels and waste products.

"In addition to the science, the article contains some general information about the workings of the Mouse House and the relations among its people, and some pictures, including several of Louis Wickham's great mouse cartoons.  I do think the legacy was worth documenting," she said.

Russell is a recipient of the Enrico Fermi Award, the Department of Energy's highest honor, as was William, who died in 2003. Both William and Liane were elected to the National Academy of Science and both received the prestigious International Roentgen Medal, among numerous acknowledgments.

"The Mouse House: a brief history of the ORNL mouse-genetics program, 1947-2009," in the journal Mutation Research/Reviews in Mutation Research is publicly available at http://www.sciencedirect.com/science/article/pii/S1383574213000690 .