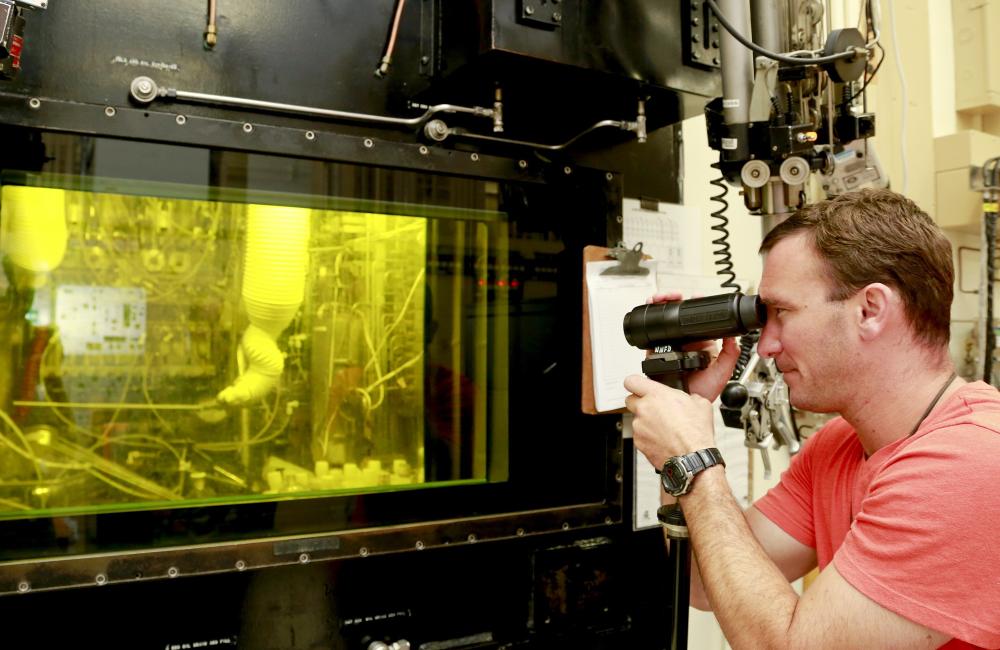 View a hi-res version of this image
ORNL’s Chris Jensen peers through 4.5 feet of alternating lead and glass layers and into a hot cell at the Radiochemical Engineering Development Center.

Since its 1977 launch, NASA’s Voyager 1 spacecraft has travelled farther than any other piece of human technology. It is also the only human-made object to have entered interstellar space.

More recently, the agency’s New Horizons mission flew past Pluto on July 14, giving us our first close-up look at the dwarf planet.

For the longevity of these missions we can thank the isotope plutonium-238. NASA missions rely on the heat produced by the natural decay of plutonium-238, using that heat to produce the electricity that allows probes and rovers to receive instructions and transmit data.

These and other missions can also thank Oak Ridge National Laboratory (ORNL), for producing the iridium containers that encased the plutonium.

Unfortunately, the United States is running out of plutonium-238. American production ended 27 years ago, when the Savannah River Site’s K Reactor was shut down in 1988. More recently the U.S. bought the isotope from other countries, but this supply is precarious. ORNL—and specifically its Radiochemical Engineering Development Center and High Flux Isotope Reactor—is critical to future plutonium-238 supplies and to future NASA scientific missions.

Nuclear power is the only type of power source that can reliably power missions so far from the sun for such an extended period of time.

Traditional batteries would have pooped out long ago. When Voyager 1 was launched, the Mary Tyler Moore Show had just concluded, Star Wars was still in theaters, and President Obama was 16. Traditional batteries don’t have that kind of endurance. And while the sun may be the brightest star in Voyager’s sky, it is long past the distance at which solar cells would do any good.

Nuclear power, such as radioactive decay heating, on the other hand, can provide reliable heat for decades.

The generators used for these space missions rely on a principle known as the Seebeck effect, in which temperature differences between conductors can be used to generate a voltage to produce electricity.

The decay heat must come from the right isotope. Among more than 3,000 atomic nuclei that have been identified, plutonium-238, with 94 protons and 144 neutrons, is uniquely qualified to power space missions. It has a high power density and the radiation it emits is almost entirely in the form of easily shielded alpha particles. And it has a half-life of 87.7 years, which allows for a long period of ample electricity production.

The National Research Council made the point clearly in a 2011 report: “The committee is alarmed at the limited availability of plutonium-238 for planetary exploration. Without a restart of domestic production of plutonium-238, it will be impossible for the United States, or any other country, to conduct certain important types of planetary missions after this decade.”

In response, NASA is working with DOE to get production going again.

“Our objective is to stand up the capability to make 1.5 kilograms of plutonium oxide annually,” explained ORNL’s Bob Wham, who acts as the plutonium project’s integration manager. “We’re doing that in conjunction with other national labs. Idaho National Lab is setting up a capability to provide the neptunium-237 feedstock for us to use and will irradiate some of the targets at its Advanced Test Reactor.  New material produced by the project will be sent to Los Alamos National Laboratory, where existing plutonium-238 is already being stored and processed for use on spacecraft.”

According to Wham, 1.5 kilograms of plutonium oxide—about 3.3 pounds—would be about the size of a 16 ounce soda can. It’s not an exorbitant amount; NASA’s Curiosity rover went to Mars with 4.8 kilograms, or what would have been more than three years’ production.

ORNL’s Radiochemical Engineering Development Center—or REDC for short—is the key to this project, which is being conducted entirely within existing DOE facilities. The 50-year-old REDC was built in conjunction with the HFIR reactor, and its hot cells allow for the processing of extremely hazardous radioactive materials. REDC regularly produces targets for irradiation—not just for the plutonium-238 production program—and runs them through a chemical separation process once that irradiation is complete.

“The biggest benefit at REDC is the chemical processing hot cells,” Wham explained, “because they give us unique capabilities for the tough job of doing these separations, recovering the material, and providing the plutonium.” He said REDC is the only facility in the country capable of doing this work without major upgrades.

The process for making plutonium-238 begins with neptunium-237, an isotope with the same number of neutrons and just one fewer proton. Neptunium-237 was also produced at Savannah River, and it is being stored at Idaho National Laboratory. According to Wham, INL has plenty of neptunium-237 to last for the foreseeable future, and, with a half-life over 2 million years, it will last for a long time.

Neptunium comes to ORNL as an oxide powder. To turn neptunium-237 into plutonium-238, you have to bombard it with neutrons. ORNL staff prepare neptunium targets in a device known as a glovebox—a large box with a plexiglass window and long, flexible gloves reaching in. They mix it with aluminum, press it into pellets the size and shape of pencil erasers, and drop the pellets into an aluminum rod that is then sealed.

The rods are known as targets and typically contain 52 pellets. They are placed in a nuclear reactor—either HFIR at ORNL or Idaho’s Advanced Test Reactor—where they are hit with neutrons. A neptunium-237 atom becomes a plutonium-238 atom after it absorbs a neutron, becoming neptunium-238, which morphs into plutonium-238 through a process known as beta decay.

Within the REDC hot cells, the targets are placed in a liquid bath of sodium hydroxide—one of the ingredients in drain cleaner—that literally dissolves away the aluminum. Nitric acid then dissolves the remaining material, which consists of plutonium, neptunium, and fission products (nuclei that split apart rather than absorbing a neutron).

The fission products will be disposed, the neptunium will be recycled, and the plutonium will go to Los Alamos. The existing store of plutonium-238 has been decaying over the years, so newly produced material will be blended with the older material to expand the availability of fuel useful for space missions.

A process in the making

At this point the process is still being worked out, Wham noted. Although the same basic processes are being used as in the past, HFIR and the Advanced Test Reactor are far smaller than the Savannah River reactor, and the process details are different. To date, he said, the project has built 65 targets and 3,000 or so pellets. Once it is in full production it will produce about 450 targets each year.

“We’re ramping up,” he said. “You can measure our output in terms of a few grams, or maybe tens of grams. We’ve been working over the last two or three years to get targets qualified to go in HFIR for irradiation. We have done that, we’ve gotten the targets qualified, and now they’ve been irradiated and we’ve actually brought about 20 targets back to the hot cell building. During the summer of 2015 we’re going to start doing chemical processing to recover the plutonium.”

Wham said the plutonium-238 production schedule will depend on funding. Initial startup is expected later this decade, with a ramp-up to the full rate following that. 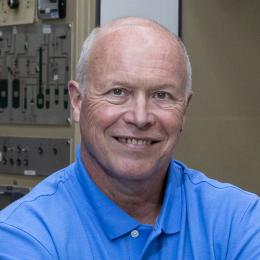