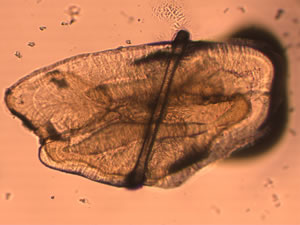 November 4, 2014 — East Tennessee is among the country’s most biodiverse regions for freshwater fish. In an abundance of shapes and colors, they swim in mountain streams and lowland lakes, sometimes ending up next to a side of garlic-mashed potatoes as a result.

While snagging a catch can make an angler’s dinner, scientists at the Department of Energy’s Oak Ridge National Laboratory are bagging fish for another reason: a fish’s ability to act as a permanent ecological record.

Using lasers and mass spectrometry to study a fish part called an otolith, ORNL researchers are collaborating with the Tennessee Valley Authority to assess TVA’s restoration efforts in the cleanup of the Kingston Fossil Plant coal ash spill, which released 5.4 million cubic yards of fly ash into the nearby Emory River in 2008.

“TVA is really concerned about finding out how well their restoration is going because they put a lot of money, time and effort into it,” said Brenda Pracheil of ORNL’s Environmental Sciences Division.

The ORNL team plans to analyze otolith samples collected over the last five years. Otoliths are fish structures involved in balance and orientation, akin to the human inner ear, but more importantly these small, clam-shaped hard-parts act as ecological scribes, recording changes in the environment throughout a fish’s lifetime.

As local water chemistry mixes with a fish’s blood, a new otolith layer is deposited in each successive year. Like tree rings, a dark ring marks otolith growth for a particular year, with the center of the otolith being the oldest part.

While soft tissue loses chemical traces after it degrades, hard parts such as otoliths retain their elemental mark even after an organism dies. And since water chemistry varies throughout the watershed, otoliths can give researchers a clue to where a fish has been and the environmental changes it has experienced, which makes otoliths useful in studies such as the Kingston spill where unaffected reference sites need to be compared to spill areas.

Although early research in 2010 showed that small quantities of a few contaminants were present in fish downstream from the spill site, the overall health of downstream fish varied little from fish collected at unimpacted upstream areas. But partly because of predator-prey interactions, some chemicals accumulate over time and don’t show up in animals until years after an event like the Kingston spill.

“Transfer through the food chain is the most important exposure route for several contaminants found in coal ash, and it might take time until we see fish that have concentrations that are of risk,” said Terry Mathews, also of the Environmental Sciences Division.

During the study, the researchers will pay close attention to selenium, mercury and arsenic levels, with selenium being of particular interest because of its tendency at high concentrations to disrupt a fish’s reproductive system and early life stages.

To get a reading on the toxin levels, the team, which includes Mathews and Pracheil, will use a technique Pracheil helped elucidate in a recent paper published in Fisheries.

After polishing and mounting on slides otoliths from largemouth bass, redear and bluegill, the researchers will first “zap” the otoliths with a laser on a transect running from the oldest section in the hard-part’s center to the newer edge material. The laser collects a data point every fraction of a second and can take around 2.5 minutes to finish a sample.

As the laser passes through the otolith rings, the material is vaporized. The ablated otolith is then sucked into a mass spectrometer where the elements are separated and show up as unique spikes on a graph, allowing researchers to quantify which chemicals are present.

In this way, researchers can look at a map of ecological history. And depending on how long the fish being sampled was alive, the readings can give both a before and after picture of how toxin levels have fluctuated in the years surrounding the spill.

“We can correlate where we are on the hard part with what’s happening in the chemistry, and we can determine what kind of chemical signature the fish is encountering at a particular point in its life,” Pracheil said. “That chemical signature is indicative of the environmental conditions it’s facing.”

While the researchers will start out analyzing around 50 otolith samples, they’ll run more tests if the data shows interesting or unusual peaks in chemical levels. Additionally, the researchers will also look at tissue lesions, egg counts, liver samples and protein and glucose levels in the blood to further understand any effects from the spill and help TVA better manage restoration efforts.

“When we look at the Kingston spill, our study is going to give us an idea of what the area looked like before the spill, because we don’t know,” Pracheil said. “As TVA works towards restoration, the study will give them a more true restoration target.”

The Tennessee Valley Authority is providing funding for the study.