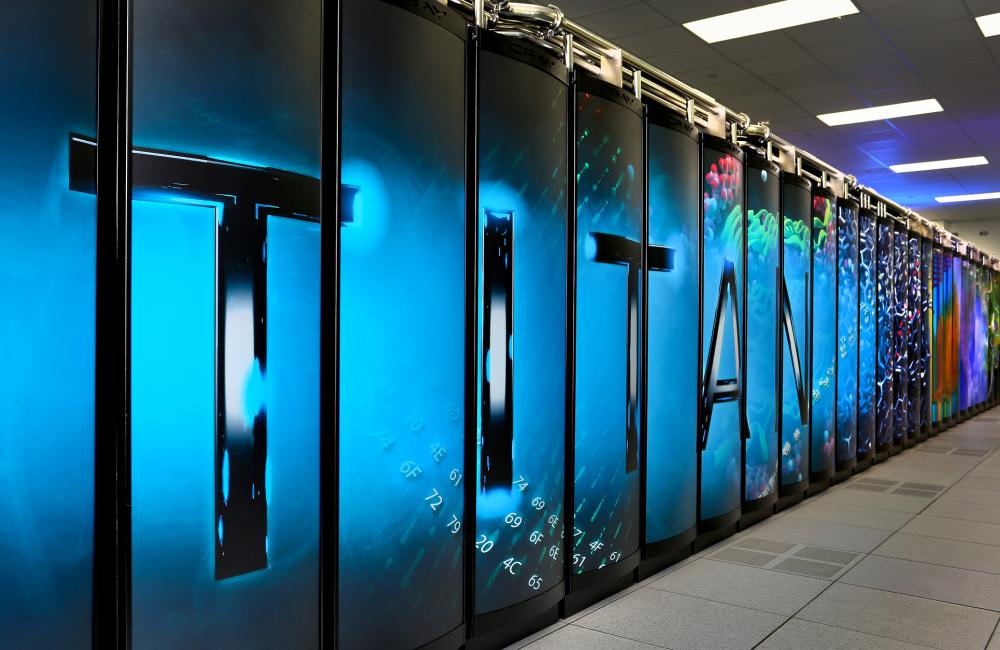 View a hi-res version of this image
DOE's INCITE program promotes transformational advances in science and technology through large allocations of time on state-of-the-art supercomputers, including the Titan supercomputer at ORNL.
Topic: Supercomputing

OAK RIDGE, Tenn., Nov. 16, 2015–The U.S. Department of Energy’s Office of Science announced 56 projects aimed at accelerating discovery and innovation to address some of the world’s most challenging scientific questions. The projects will share 5.8 billion core hours on America’s two most powerful supercomputers dedicated to open science. The diverse projects will advance knowledge in critical areas ranging from sustainable energy technologies to next-generation materials.

Researchers from academia, government research facilities, and industry received computing time through the Innovative and Novel Computational Impact on Theory and Experiment, or INCITE, program. The program was created as the primary means of accessing the DOE Leadership Computing Facilities at Argonne and Oak Ridge national laboratories.

“The INCITE program drives some of the world’s most ambitious and groundbreaking computational research in science and engineering,” said James Hack, director of the National Center for Computational Sciences, home to the Oak Ridge Leadership Computing Facility, a DOE Office of Science User Facility. “The program has a very strong and diverse collection of projects in 2016, and we look forward to working with investigators to ensure they succeed with their challenging objectives.”

“Not only does INCITE give researchers access to two of the fastest supercomputers in the world, the program also provides support and expertise to make sure they maximize their time on our leading-edge systems,” said Michael Papka, director of the Argonne Leadership Computing Facility (ALCF), a DOE Office of Science User Facility.

Despite continued upgrades, expansions, and advances in computing power, demand for leadership-class resources such as Mira and Titan continues to exceed availability. Applications for time through the INCITE program once again greatly exceeded the numbers of awards.

The INCITE program promotes transformational advances in science and technology through large allocations of time on state-of-the-art supercomputers.

DOE’s Office of Science is the single largest supporter of basic research in the physical sciences in the United States and is working to address some of the most pressing challenges of our time. For more information, please visit energy.gov/science.