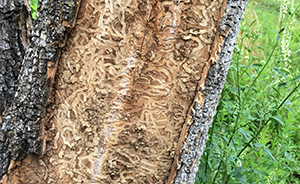 October 2, 2014 — With leaves taking on more golden hues, trees skirting the drive to the Department of Energy’s Oak Ridge National Laboratory in northeastern Tennessee are beginning to show the first signs of fall. A few even look like they’ve closed shop for winter early, already having shed all their leaves.

But it’s not yet the weather that’s responsible for the naked treetops. Rather, a small metallic green insect is the culprit, and it’s guilty of more than the tree deaths around ORNL and the neighboring counties.

The emerald ash borer, which feeds on and kills ash trees, has plagued large portions of the United States and Canada ranging from New Hampshire to Colorado and southeastern Canada to the southeast United States. Native to East Asia, the beetle has been so devastating to North American ash trees that some researchers have compared it to the chestnut blight of the early 1900s and the Dutch elm disease that followed only decades later.

“We’re hoping we’ll have something left to work with,” said Greg Byrd, who’s part of the ORNL Facilities and Operations Directorate’s effort to monitor emerald ash borer effects on DOE’s Oak Ridge Reservation. “Maybe 1 percent of ash trees will survive, but that might be optimistic,” he said.

The pest was first found in Michigan in 2002 and reached Tennessee in 2010. The reservation appeared to be unscathed until 2012, after a collaborative effort with state researchers found the insects in detection traps near the lab. Now, telltale signs of emerald ash borer such as serpentine trails under ash bark and D-shaped holes on ash tree sides are found almost everywhere.

“We knew we had it, but now it’s just blinking obvious that trees are dying,” Byrd said.

DOE’s Oak Ridge Reservation contains one of the largest undisturbed plots of ridge and valley in the state, with about 33,480 total acres. Nearly 24,000 acres are forest, which is 30 percent more woodland than when the U.S. government acquired it in 1942.

Much of the soil at the reservation is well suited for ash trees. Ash makes up around 4 percent of the trees on the managed landscape, almost twice the average of ash trees on state forestland. Byrd estimates there are about 100,000 ash trees on the property, though many are small and likely will succumb to natural causes before the ash borer touches them. At least 15,000 are large trees, however, and are vulnerable to the borer.

In 2012, Byrd surveyed 6.5 miles of Bethel Valley Road, which essentially transects ORNL lengthwise. Applying his earlier observations to today, he now thinks that the entire reservation probably harbors more than 12,000 infected ash trees. Even if we’re lucky and get only 99 percent mortality, he said, around 14,850 ash trees would still be lost in the next three to five years.

The Tennessee Division of Forestry values the total state ash stand of 271 million trees at $11 billion. Ash trees provide aesthetics and shade in urban areas, but ash wood is also tough, making it good for wood carving, crates, Louisville Sluggers and guitar bodies, as well as firewood. Some of these uses are responsible for the beetle’s arrival in North America and its subsequent spread.

It’s thought that the ash borer came to western shores by hitching a ride on cargo ships that used ash wood in stabilizing or packing cargo. Following the borer’s landfall, people spread the insect by moving infested nursery trees or firewood to borer-free areas.

In fact, Tom Simpson, an urban forester with the Tennessee Division of Forestry who’s one of the outside researchers working with Byrd at the reservation, said 95 percent of the spread is due to transport of firewood. Now most regulated campgrounds have restrictions on bringing firewood from outside the area. To prevent the spread of the ash borer and other tree diseases, the National Park Service recommends to “buy where you burn and burn where you buy.”

While all dead trees present a safety risk, the emerald ash borer is killing ash trees so fast and to such an extent that the danger is elevated. Many of the trees edge on areas frequented by pedestrians or places with utilities. Dead trees or branches have the potential to fall on passersby or damage power lines or electric cables, which could be costly to repair.

“What grows up has got to come down,” Byrd said.

With the problem elevating, Byrd and other ORNL natural resource managers are concentrating much of their emerald ash borer efforts on identifying ash trees around campus located in the “four P” zone. Because chemical treatments for the ash borer are effective for only a short time, can become expensive, and are virtually useless if the tree is already heavily infected, Byrd promotes dealing with problematic trees before they cause any harm or damage.

Sally Ross is a summer intern at the lab who studies urban forestry at Southern University and A&M College in Louisiana. She’s working with Byrd to take an inventory of trees on ORNL’s campus, and it’s critical for identifying imperiled trees that need to be managed.

“It’s better to be proactive than reactive,” Ross said.

The emerald ash borer isn’t the first tree pest epidemic ORNL has experienced. Initially, Byrd came to the lab to manage the impact of southern pine beetles, a native beetle species that sharply increased in number and devastated yellow pines in the region in 1993 and again at the turn of the millennium.

The ORNL campus has also seen episodes of bacterial leaf scorch, and the reservation is struggling with hemlock woolly adelgid now. Additionally, nearby in the city of Oak Ridge, the “thousand cankers” disease that afflicts black walnuts has been detected recently, and gypsy moths, which defoliate forests, have been recorded historically.

If there’s anything positive to be taken from the pandemic of tree diseases, it could be that the variety of diseases reflects a diverse forest at the reservation. Based on various inventories, Byrd said there around 84 tree species, and he would like to keep it that way.

With the growing forest health expertise in the region, maintaining the reservation’s biodiversity isn’t an unrealistic goal. Researchers are learning more about tree and disease interaction, and in the long run, there remains a chance for ash and other trees to spread their leaf-covered limbs again.

UT-Battelle manages ORNL for the Department of Energy's Office of Science. The Office of Science is the single largest supporter of basic research in the physical sciences in the United States, and is working to address some of the most pressing challenges of our time. For more information, please visit http://energy.gov/science/. –Chris Samoray