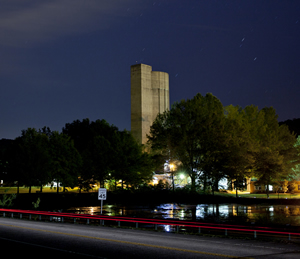 April 18, 2012 — Holifield Radioactive Ion Beam Facility (HRIBF) operations have ended in style, with researchers scurrying to complete three exciting experiments before the program's last day on April 15. The final day was initially scheduled for April 1, but the user program received a two-week "reprieve" to finish the three experiments.

"The facility ceased operations at midnight on April 15," said Physics Division Director David Dean. "Our highly dedicated technical staff of facility operators, engineers, and scientists, led by HRIBF Director Jim Beene and Alan Tatum, have pushed themselves and the facility to new heights to complete this unique science program," he continued.

Slightly less than a month before the user operations ended, the HRIBF marked the 50th anniversary of one of its primary components. March 18, 1962, was the day operators of the Oak Ridge Isochronous Cyclotron circulated its first light ion beam. ORIC, which produces the initial light ion beam for radioactive ion beam production at HRIBF, was one of the first isochronous cyclotrons in the world.

The ensuing half-century has produced volumes of research through beams of, initially, light ions, then heavy ions and, after 1996 when the HRIBF was commissioned, short-lived, radioactive nuclei. The HRIBF has been the experimental resource and training ground for researchers located all across the low-energy physics scientific community, from all corners of the world.

The three final user experiments are typical of what the facility has offered the research community for all these years.

Ricardo Orlandi, a researcher from CSIC Madrid, is leading a measurement of a unique reaction on Tin-132, an unstable isotope important to nuclear astrophysicists who investigate how the heaviest elements are created in supernova explosions. It is also important to researchers investigating the structure of the unstable, 'doubly magic' tin isotope, which has closed shells of both protons and neutrons.

Another experiment, led by ORNL physicists Krzysztof Rykaczewski and Robert Grzywacz (also a University of Tennessee faculty member), is using the facility's first laser ion source and new second radioactive ion beam production platform to collect data on exotic isotopes of gallium. The laser source, built by ORNL's Yuan Liu, coupled to the facility's isobar separator, provided very high purity beams for study of the structure of these rare isotopes. At the same time, this group is commissioning the neutron detector 3Hen, which could see future service at another isotope facility. The HRIBF experiment hopes to yield lifetime and level information on gallium-86; previously, only the existence of this isotope had been reported.

The third project is actually four experiments to study different states of a variety of exotic tin isotopes. ORNL staff members Robert Varner and Jim Beene, working with postdoc Mitch Allmond and the University of Tennessee's Kate Jones and Anissa Bey, blasted a beryllium-9 target with unstable tin-126, 128, 130, and 132 nuclei, and detected the resulting light particles and gamma rays to probe tin isotopes with one additional neutron added to the beam nucleus. These measurements are important both to learn about the structure of heavy exotic nuclei and about supernova element creation. Two of these experiments, on tin-126 and 128, will be part of the thesis work of graduate student Brett Manning from Rutgers University.

The HRIBF has offered nuclear scientists unique beams for studies of the forces that hold protons and neutrons together into an atomic nucleus. HRIBF is the only facility in the world that produces unique, short-lived proton-rich beams such as fluorine-17 as well as neutron-rich beams.

Besides the one-of-a-kind beams the HRIBF produced, the facility was unique in itself: For example, the massive shield doors for the cyclotron vault were the largest the supplying safe company had ever produced. The 100-foot-tall electrostatic tandem accelerator -- the silo-shaped Lab landmark -- has generated an electrostatic voltage of 32 million volts, which might still hold the record for the highest voltage ever produced by a man-made device.

The stream of researchers who came to ORNL inspired the establishment in 1982 of ORNL's initial collaboration with state of Tennessee universities -- the Joint Institute for Heavy Ion Research, located near the HRIBF.

The end of the HRIBF user program was announced in the February 2011 budget request for fiscal year 2012. The cost-saving measure was coupled with the end of another, much larger physics facility, Fermilab's Tevatron, whose mission has been supplanted by Europe's Large Hadron Collider.

When the Holifield Heavy Ion Research Facility (HHIRF) was threatened with closure in the early 1990's, Charles Jones, David Olsen, and the late researchers Russell Robinson and Jerry Garrett led the initial planning for the facility that became the HRIBF. HRIBF was dedicated in November 1996, and the first beam was delivered in 1997.

Other missions for the HRIBF are under consideration now that operations have ceased. Meanwhile, a needed two-month maintenance period for the tandem accelerator will begin immediately.

"We're hoping we can get approval to run some experiments on the tandem, which is relatively cheap to run," said the Physics Division's Michael Smith, whose nearly two-decade ORNL tenure in astrophysics has been based at Holifield. "We hope to carry out forefront measurements as well as commission new detector and target systems for use in next-generation facilities."

In the meantime, the last flurry of radioactive ion beam experiments recalls a half-century of science produced by a unique, at times quirky, but resilient workhorse.

"It's been hectic and exciting," Smith said. "We've had all these different groups in the facility simultaneously doing different experiments. A new laser ion source, new platform, new detector system, new reactions, and a lot of exotic beams that can't be done anywhere else in the world. It's an incredibly productive way to do science."