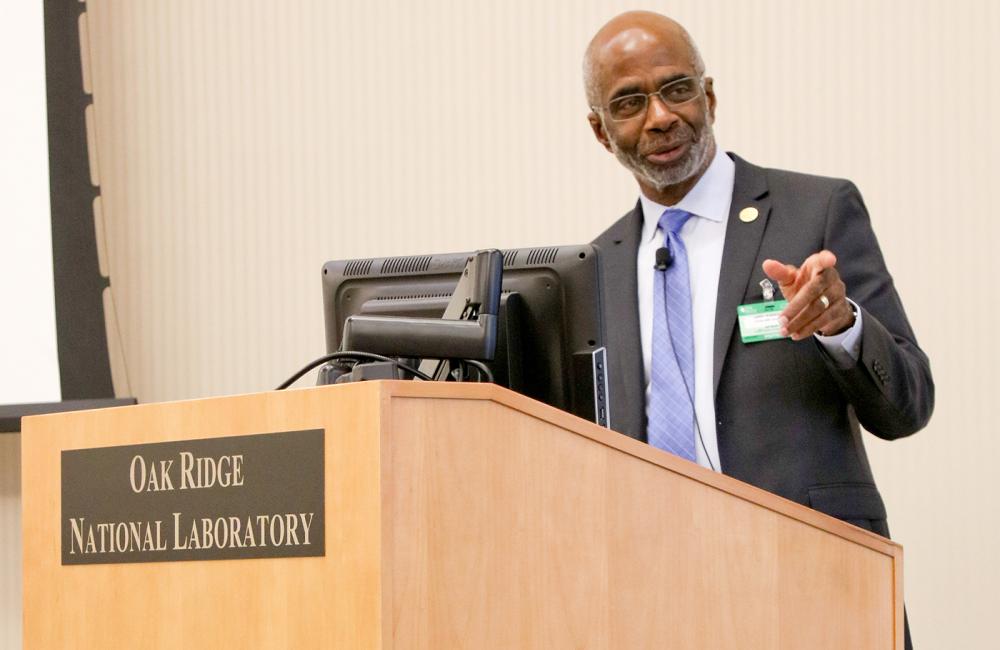 Robinson has had a long, accomplished career, and he credits his success to the quality of his early education.

Robinson graduated from the University of Memphis with a degree in chemistry and earned his doctorate in nuclear chemistry from Washington University in St. Louis in 1984. He joined ORNL later that year as a staff researcher and eventual group leader.

His time at ORNL was marked by his investigation into the cause of death of President Zachary Taylor in 1850. Using neutrons from the High Flux Isotope Reactor and samples of Taylor’s hair and fingernails, Robinson and his team determined that Taylor did not die from arsenic poisoning, debunking a long-held speculation about the late president’s demise.

Robinson left ORNL in 1997 to lead Florida A&M’s Environmental Sciences Institute. Since then, he has served as FAMU provost, vice president for academic affairs and currently as interim president. He was also appointed for a time as Assistant Secretary for Conservation and Management in the National Oceanic and Atmospheric Administration.

Florida A&M University is one of the largest and highest-ranked public historically black universities in the nation and has the highest research and development expenditure of all HBCUs. As interim president, Robinson works to elevate the school’s profile and continue its legacy of progressive and innovative thought.

“Florida A&M got it right from the start,” he said. “No one ever stood on the front steps and said you couldn’t come here, and no one ever will. Our doors have been open to everyone.”

Robinson began his college education at LeMoyne-Owen College, a small historically black college also in Memphis. His time there, he said, showed him firsthand how HBCUs serve the community and the impact they have on the academic and social future of their graduates.

“HBCUs are able to flip their graduates’ economic realities in less than a generation. That’s a remarkable feat,” Robinson said. “They are largely responsible for the emergence of the black middle class throughout this country.”

HBCUs make up only three percent of America’s total institutions of higher learning, yet enroll more than 11 percent of the country’s black students. Nearly half of all black teachers and lawyers, and eight of every 10 black judges, are HBCU graduates.

Furthermore, HBCUs account for 60 percent of all black students who go on to earn doctoral degrees in STEM fields. Even more impressive, Robinson said, is that HBCUs can achieve all of this with a fraction of the endowment of larger, more well-known institutions.

America needs institutions like Florida A&M more than ever, Robinson said, if it hopes to overcome the current crisis in black education. There is a chronic underrepresentation of teachers of color in public schools relative to the growth of students of color. By 2020, an estimated 300,00 new teachers will be needed each year, so the education system must look to communities of color for a more diversified workforce capable of providing quality education for tomorrow’s children.

“Over the past few decades, African American students across the nation have made real gains in academic achievement, yet too many are not getting the quality education they need and deserve,” Robinson said. “These deficiencies are driven by gaps in opportunity and school resources.”

Robinson said the agendas of HBCUs have historically gone hand-in-hand with the civil rights movement, citing Martin Luther King Jr.’s “fierce urgency of now” and the need for “vigorous and positive action” on education reform and equality.

“You have to have to come out to carry the baton and ensure that young people have the opportunity to contribute in a meaningful way,” he said. “Throughout our history, nothing has come easy, and we don’t expect it to change anytime soon.”

Robinson also stressed the importance of cooperation within communities and strategic partnerships with institutions, such as ORNL, with the ability to enable large-scale change. With their help, historically black colleges and universities can assert themselves as major players and shape the future of black education.

“I don’t think we can afford to sit around and wait for something to fall out of the sky,” he said. “We have to take this on headfirst.” – by Sean Simoneau