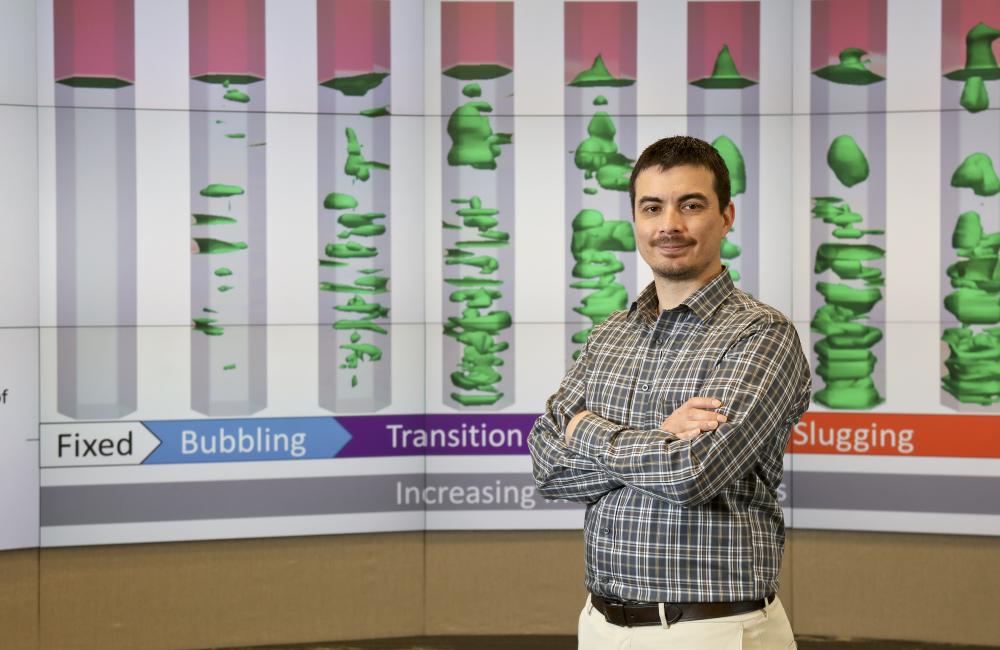 View a hi-res version of this image
Emilio Ramirez studies the slugging transition in a bench scale reactor made possible by the Computational Pyrolysis Consortium, a multilaboratory collaboration formed to develop infrastructure ready fuel from biomass feedstock.

Ramirez, a California native who is now a University of Tennessee doctoral candidate working with the Department of Energy's Oak Ridge National Laboratory, acquired his first experience with bioenergy as the lead operator of a biomass circulating fluidized-bed combustion facility. Although the work was steady and intriguing, Ramirez knew he wanted to contribute to bioenergy on a national scale.

This desire to learn came at an early age. A son of immigrants from the state of Michoacan in Central Mexico, Ramirez grew up watching his parents pick and package scallions to provide for him and his siblings. Ramirez spent summers helping with his parents’ work — just enough time to show him that he did not want to follow similar suit. He applied his talents in mathematics and science to create a different career path.

All those hours adjusting and experimenting with thermal controls at the power plant gave Ramirez insight into what that path might be. Not only could the plant increase operational reliability, generate savings and improve efficiency — but Ramirez himself could make a difference in how biopower is produced.

“As an operator, I used thermodynamics to investigate equipment efficiency and looked for ways to improve performance,” Ramirez said. “By observing, studying and trying new approaches, I demonstrated to management that there were ways to achieve better outcomes.”

Ramirez’s work led to the establishment of a plant thermal performance committee and the implementation of protocols, which are still in use today.

“I could have stayed with the company,” he said. “I had the respect of the engineers and leaders. I didn’t just want to work with the engineers, though, I wanted to be one.”

The drive to complete a doctoral degree led him to the only place in the country that offered the research expertise he needed — ORNL.

“I wanted to work with Stuart Daw. His background and research in fluidized-bed nonlinear dynamics, combustion analysis and chaos control was what I needed to further my study. He was the only researcher in the country with this background who also closely collaborated on fluidized-bed numerical models,” Ramirez said.

In 2013, Ramirez was accepted to complete his doctorate at the Bredesen Center for Interdisciplinary Research and Graduate Education, a joint partnership of the University of Tennessee and ORNL. He packed up with his wife, Fabiola, who teaches mathematics, and made the trip cross country.

Today, he works daily with Daw, a UT-Battelle Corporate Fellow who leads the multilaboratory biomass consortium known as the Computational Pyrolysis Consortium with support from the DOE Bioenergy Technologies Office. Ramirez also uses cluster resources provided by the ORNL Computer Science and Mathematics Division in his reactor simulations.

Daw challenged Ramirez to study the slugging transition and its relation to biomass pyrolysis oil yields. Slugging refers to slug flow, which is a liquid-gas two-phase flow in which the gas phase exists as large bubbles separated by liquid “slugs.” Ramirez has been researching the hydrodynamic transition phase between bubbling and slugging, pinpointing the moment of transition and developing metrics using numerical models that can be used in experiments.

“The transition to slugging is a critical operating limit for optimizing product yields,” Ramirez said. “If we can detect the bubbling to slugging transition, we can increase oil yields. The faster we can move pyrolysis products through the reactor without slugging, the finer control of the oil yield quality from biomass.”

Ramirez has been demonstrating slugging transition points in a simulated bench scale reactor, and he built a small scale version that he uses to demonstrate how the unique bubbles in biomass pyrolysis affect mixing and heat transfer.

“There’s much more research to be done,” Ramirez said. “I hope that the work I am doing today will influence reactor design and operation in the power industry. I want to contribute to the technology needed to grow the bioenergy industry, to help our country meet our renewable fuel mandates by developing more efficient ways to produce biomass energy at a cheaper cost.”

On track to complete his doctoral degree in 2018, Ramirez plans to continue his research long after graduation. He and his family have settled into the local community. Ramirez hopes to pass along his passion for discovery to the next generation — his newborn son Emilio Jr. — who may just live in a cleaner environment one day thanks to Emilio Sr.’s work in biomass pyrolysis.

ORNL is managed by UT-Battelle for the Department of Energy's Office of Science, the single largest supporter of basic research in the physical sciences in the United States. DOE’s Office of Science is working to address some of the most pressing challenges of our time. For more information, please visit energy.gov/science. — By Jennifer Burke