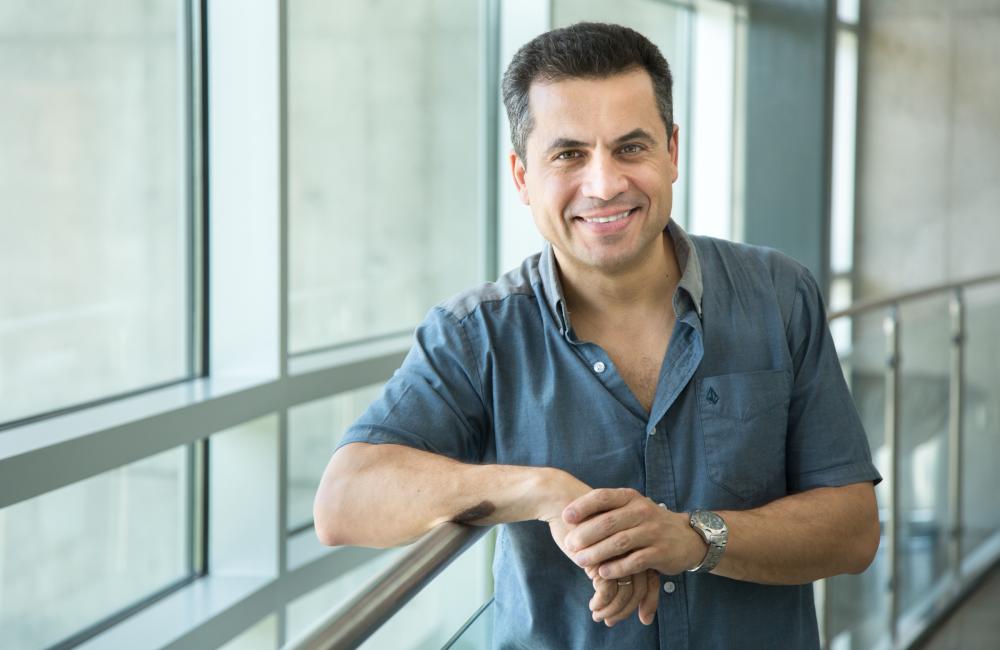 August 8, 2016 – Theory and experiment push each other to expand the frontiers of physics. Now, the Neutron Sciences Directorate at the Department of Energy’s Oak Ridge National Laboratory has both.

Cristian Batista, a theoretical condensed matter physicist with a joint appointment at ORNL and the University of Tennessee, is bringing theory to the experimental research conducted at the Shull Wollan Center – a Joint Institute for Neutron Sciences.

“Cristian coming to UT and ORNL is great for neutrons,” said Chief Scientist of ORNL’s Neutron Sciences Directorate (NScD) and Shull Wollan Center Director Alan Tennant. “Bringing in such an outstanding theorist adds a new dimension to the program here at NScD and will attract world leading researchers to spend time at the Shull Wollan Center and our facilities. For us, it is an exciting new opportunity and Cristian is already making a significant impact on our science.”

Batista has made seminal contributions to the understanding of quantum magnetism, pioneered the discovery and explanation of certain quantum states of matter, and has often collaborated with experimentalists in an effort to apply theory to collected data. Now, he is bringing his unique skillset to ORNL, where he will continue to apply fundamental theoretical knowledge to the experiments conducted at the Spallation Neutron Source and the High Flux Isotope Reactor—DOE Office of Science User Facilities.

“Most scientists are working with the users, collecting data, and of course processing that data. But at some point you need to interpret that data and be able to explain the new observations that cannot be explained with standard theories,” said Batista. “That will be my role here.

“One of my main interests is to find and characterize new states of matter that sometimes don’t have a classical counterpart. Many of these states have an intrinsic quantum mechanical microscopic origin. We need to understand the physical mechanisms that stabilize these states, as well as their response functions and functionalities.”

At the Shull Wollan Center, Batista has already started working on important projects in the field of magnetic neutron scattering.

Batista explained the significance of one of his projects, saying, “There are several materials that exhibit magnetic orderings, which cannot be described with a simple semi-classical treatment. We have observed very atypical behavior in the so-called ‘frustrated magnets’ in experiments here at SNS and HFIR.”

Magnetic moments are considered frustrated when competing exchange interactions exist that cannot all be satisfied simultaneously. Frustration leads to a very broad diversity of complex physical behaviors and functionalities. The set of novel states of matter enabled by frustration includes exotic spin liquid states, which challenge traditional classifications based on symmetry principles, and emergent mesoscale structures, such as skyrmions or vortices, which can be used for developing entirely new memory devices.

“So, one of my projects is to deliver up alternative methods that take into account the important role of frustration as a mechanism for amplifying the effect of quantum fluctuations. These frustrated or conflicting interactions induce strong deviations from classical mechanics, which can produce qualitatively different physical properties,” said Batista.

Batista was previously a researcher at Los Alamos National Laboratory and a teacher in Argentina before that. He said he’s looking forward to being back in the classroom at UT.

“Another reason I took this joint position is the possibility of exposing students to the experimental work that is being done at SNS,” he said. “I think this is a unique opportunity for education, so my plan is to engage the students and the post-docs in collaborations with scientists from SNS.”

During his appointment, he also hopes to establish a theory group at the Shull Wollan Center.

“I’m very excited about the possibility of building a small theory group,” Batista said. “We have world-class instruments here, and now we need to bring ideas here to make the best of them. Hopefully in the future, there will be more people trying to provide theory support for the great amount of experimental data being collected at SNS.”

UT-Battelle manages ORNL for the DOE’s Office of Science. The Office of Science is the single largest supporter of basic research in the physical sciences in the United States, and is working to address some of the most pressing challenges of our time. For more information, please visit http://energy.gov/science/.—by Chris Botsis