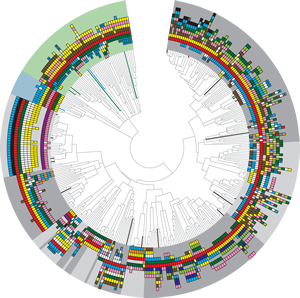 OAK RIDGE, Tenn., July 02, 2010 -- Using ever-growing genome data, scientists with the Department of Energy's (DOE) Oak Ridge National Laboratory and the University of Tennessee are tracing the evolution of the bacterial regulatory system that controls cellular motility, potentially giving researchers a method for predicting important cellular functions that will impact both medical and biotechnology research.

A new study from the Joint Institute for Computational Sciences, a research venture between ORNL and UT, has demonstrated how knowledge of biological systems can be derived by computational interrogation of genomic sequences. The results have implications for areas ranging from medicine to bioenergy.

"We now have hundreds of millions of DNA sequences from all sorts of organisms deposited in databases. However, our abilities to translate raw genomic data into useful knowledge are still very limited," said Igor Zhulin, joint faculty professor and principal investigator.

"We applied our computational skills to glean more information about a biological system that has fascinated researchers for more than a century. This is a molecular signal transduction system that allows bacteria to navigate in the environment pretty much in the same way that higher organisms, including humans, do?by detecting signals (e.g. visual or chemical cues) and then moving toward favorable environments and away from dangerous ones."

In general, signal transduction systems in bacteria are very simple, consisting of only one or two proteins that regulate expression of various genes in response to changes in the environment. The navigation system, however, is significantly more complex and in some bacteria may involve dozens of different proteins.

How such complexity arose was unknown before this study, which has discovered intermediate signaling systems in bacteria that contain elements of both simple systems that regulate gene expression and the complex navigation system. This provides an argument for the gradual evolution of the navigation system from well-known transcriptional regulators that are much simpler in design, Zhulin said.

Because the navigation system of bacteria has been studied by scientists employing the latest advances in genetics, biochemistry, biophysics, structural biology and other traditional biological disciplines, the system has become one of the best understood molecular systems in nature.

"We took advantage of this knowledge," said Kristin Wuichet, a postdoctoral fellow, who carried out the computational work. "Without it we would be unable to mine the genomic data intelligently."

Wuichet sifted through trillions of letters of the DNA code to extract sequences encoding each component of this navigation system. Then, Wuichet and Zhulin designed a computational approach to classify these sequences by applying a variety of bioinformatics tools in a logical, step-by-step procedure.

"By using diverse computational methods, this study has revealed in remarkable detail how a simple two-component signaling pathway can evolve into complex systems like the ones that govern bacterial chemotaxis," said James Anderson of the National Institutes of Health (NIH), who oversees gene regulatory network grants at the NIH's National Institute of General Medical Sciences, which supported this work. "This computational approach will be of enormous value in uncovering the inner workings of beneficial and pathogenic microorganisms that cannot be studied using traditional laboratory methods."

The study has revealed more than a dozen versions of this navigation system and assigned hundreds of bacterial species to each of them. "To use a metaphor, one can compare this system to types of cars," Zhulin explained. "Imagine, if you would have only seen two types of cars in your life, say a small two-door sedan and a mid-size SUV. By comparing the two, you might guess that there can be other types of cars out there, but you wouldn't know exactly what they are. Prior to our study, we knew exact details of only two types of navigation system from two model organisms. Simply put, our work reveals that there are all kinds of things on the roads?luxury sedans, minivans, roadsters, pick-up trucks, and we know which bug is in which vehicle."

Zhulin said the findings "will allow predicting how individual bacteria will use their 'vehicle' to get where they want to be, which is very important in order to be able to fight pathogenic organisms that direct their movement toward weak spots of our bodies."

At the same time, ORNL researchers are making use of the findings in advanced bioenergy research.

"These same issues of microbial 'navigation,' or so-called chemotaxis, are important for microbial processing of biofuels," said Paul Gilna, director of the ORNL-led DOE BioEnergy Science Center (BESC), a DOE Bioenergy Research Center supported by the Department's Office of Science. "That's why we were pleased to co-sponsor this research with the National Institutes of Health and leverage NIH resources to learn more about this process."

BESC is searching for new cost-effective ways, using microbes, to convert plant cellulose to biofuels, a "green" alternative to oil and coal.

"Cellulases from microbial sources are key enzymes in this process and come in different shapes and forms that are difficult to decipher from DNA sequence alone," said Gilna. "This study gives us a powerful computational approach that we can now use to reveal new types of cellulolytic enzymes, as well as provide us with deeper insights into complex regulatory pathways that control their activity."

"This work could significantly aid in our goal of producing microbes that are capable of carrying out all the steps in processing fuels from plant feedstocks," Gilna added. "In this approach, which we term Consolidated BioProcessing, or CBP, we are working to develop microbes that can both deconstruct plant cellulosic components as well as process the released sugars into biofuels. Understanding better how such microbes can locate their respective substrates in a large biofermenter will greatly enable us to tune the efficiency of such processes, which could lead to profound improvements at a national level in the costs of producing biofuels."

The paper describing this work, titled, "Origins and diversification of a complex signal transduction system in prokaryotes," appears in the new journal Science Signaling by the publishers of the Science magazine and is available online at http://stke.sciencemag.org.