Sometimes conducting big science means discovering a species not much larger than a grain of sand.

This happened for Evin Carter, a research associate and wildlife ecologist at the Department of Energy’s Oak Ridge National Laboratory, who helped discover a new species of cave snail just outside the Oak Ridge Reservation, an area that includes ORNL and parts of the city of Oak Ridge.

At less than 2 millimeters long, the Tennessee cavesnail, or Antrorbis tennesseensis, spends its days on or under rocks in the far reaches of only two caves – usually in streams that aren’t too muddy or silty. The species was also possibly identified in a third cave.

The snail’s name is a nod to its home state and to the fact that several researchers involved in its discovery are affiliated with the University of Tennessee, including UT professor Annette Engel. Carter himself is a UT alum, as is researcher Matthew Niemiller and the study’s lead author, Nick Gladstone, who Carter mentored during a post-masters research experience at ORNL.

Out of sight, out of mind

Exploring cave ecosystems is a natural fit for Carter, a conservation ecologist and longtime caver. “Caves are sort of the out of sight, out of mind environments that receive little attention, even from biologists,” Carter said, “but there’s a lot of undiscovered diversity in caves.”

Known diversity in U.S. caves includes more than 1,100 species, according to Encyclopedia of Caves. Crawling underground to find new ones is often muddy and always tough – requiring researchers to squeeze through tight spaces, scramble over boulders, rappel into pits, and sometime even wade, swim and snorkel through underground stream networks. Looking for snail microspecies such as A. Tennesseenis, which measures in smaller than the tip of a crayon, takes a keen eye.

They pick up the minute mollusks using delicate tools – sometimes a small paintbrush or a pipette – and store them in vials. From there, the process of sifting through specimens often moves at a snail’s pace. Taking the necessary steps to classify them can take years.

But there’s a purpose to the hard work: “From a conservation perspective…if we can’t say that this species is here, we can’t effectively conserve it in the long term,” Carter said. “It’s challenging to spur conservation action for animals that are not yet officially described.”

After describing the Tennessee cavesnail, researchers recommended that the species be listed as endangered based on standardized assessments of vulnerability. The designation may help conservation organizations – as well as federal and state agencies – protect it.

“Conservation is very interesting and very philosophical,” Carter said. On top of preserving species for the study and enjoyment of future generations, you never know when species could have benefits to humans, he added.

Snails and mollusks are among the most endangered groups because they can be sensitive to sediment levels and often have very specific habitats, Carter said. That means human manipulation of the environment – such as damming, culverts, and construction and agricultural practices that change water flow or release silt into rivers and streams – can have a big impact. Species that only live in caves, relatively stable environments where weather and light changes are minimal to nonexistent, can be especially vulnerable to these changes that come from the surface.

Snails’ sensitivity to habitat changes means that any dramatic changes to snail abundance or behavior could signal a larger environmental problem. Additionally, in very low-energy systems like caves, even the smallest lifeforms may play important ecological roles, perhaps ensuring the survival of more well-known cave species such as bats and salamanders.

“We just don’t know what they have to offer until we look,” he said.

Carter has plans to survey the approximately 40 other caves on the Oak Ridge Reservation. With only a handful completed so far, there’s much more to be found.

The results of this work were published in a paper titled, “A new species of stygobitic snail in the genus Antrorbis Hershler & Thompson, 1990 (Gastropoda, Cochliopidae) from the Appalachian Valley and Ridge of eastern Tennessee, USA,” in the journal ZooKeys.

The Cave Conservancy Foundation supported this research. Cave work and wildlife surveys on the Oak Ridge Reservation were also supported by DOE Reservation Management through the Wildlife Management Task. 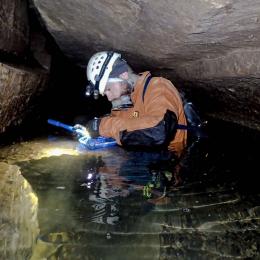