Bianca Haberl: Finding the joys of science under pressure

Bianca Haberl: Finding the joys of science under pressure

February 6, 2017 - Scientific research can be vexing and tiring at times, but for Bianca Haberl, the euphoria of discovery is the ultimate reward.

In fact, Haberl can identify the specific instance, early in her career, when that excitement originated and guided her toward high pressure science. It was her first time working on a synchrotron, studying the phase transitions and structural changes of silicon under high pressure. Her team had been awake for two days straight with little success, until the early pre-dawn hours when one of their samples started to change.

“All of a sudden, these bits of silicon started popping up, essentially we saw ‘bubbles’ of metallic silicon appear. We could actually see, with our eyes, the phase transition happening before us,” Haberl said.

The thrill of that breakthrough more than made up for the frustration and the sleepless nights, and ever since, she said, she’s been completely hooked.

“You literally jump up in the middle of the night, dancing through the room because you’ve gone a step further and have seen something that no one else has seen before,” Haberl said. “No matter how tired you are, no matter how hard the work was, the moment it clicks is fantastic. It’s all worth it.”

Haberl, a researcher at the Department of Energy’s Oak Ridge National Laboratory, is a Weinberg Fellow and the high pressure science coordinator in the Neutron Sciences Directorate’s Advanced Diffraction Group. Her research focuses on compressing and transforming silicon and related elements into new materials and studying the transformed structures with neutron scattering at the Spallation Neutron Source, a DOE Office of Science User Facility.

Science has been a lifelong pursuit for Haberl. Before she was even five years old, she knew she wanted to be a researcher.

“I think what I had in mind then was more like running through the forest and finding things,” she said.

She loved mineralogy and archaeology, and her parents actively encouraged her interests by bringing her to the ancient ruins of their native Germany.

Haberl earned her master’s degree in physics in Germany, and then moved to Canberra, Australia, where she first studied high-pressure silicon phase transitions during her doctoral work at the Australian National University.

Haberl performs high pressure phase transitions by poking or squeezing amorphous silicon between the faces of a diamond anvil cell, an experimental device capable of exerting pressure equivalent to that at the core of our planet. The pressure she applies with such devices irreversibly alters the silicon’s structure, improving its electronic and photovoltaic properties for applications in solar cells, semiconductors and electromechanical systems.

She uses neutron diffraction to examine the phase transition in real time and track the movement of individual atoms. The ability to examine the behavior of these atoms under the required pressures with neutrons is unique to SNS and ORNL, and a vital tool for understanding the mechanics of phase transitions.

Haberl credits her curiosity as her main motivation for constantly improving old ideas and investigating new ones. For every outcome, every new material, she said, she is still interested in how to get from Point A to Point B, to whatever comes next.

“A common topic across science, no matter what you are studying, is the fundamental reason why something is happening and how you can understand it better,” Haberl said. “I think it’s almost this childlike wonder. I think that never changed and is basically what keeps me going.”

Haberl was drawn to ORNL because of its unique facilities and the opportunities available for its researchers. For the lab to succeed, she said, it needs to capitalize on its strengths and promote a science culture that supports its staff and their visions.

“The culture of science can’t just embrace one particular aspect. It needs to embrace all aspects of science,” Haberl said. “You need to enable people to study what they’re passionate about, to gain the understanding they are searching for, and give them the sufficient space and liberty to do so.”

Haberl’s enthusiasm for her work is contagious and she tries to pass along that spirit to the users, students and postdocs she encounters by encouraging them to experiment and think in new ways.

“If a supervisor is super excited about the things that are happening, the students take that on themselves and share in the excitement,” Haberl said. “We need open communication. We need to make sure people pass on that passion about their science and what drives them so we can work together as a community and really push our understanding of the world further.” 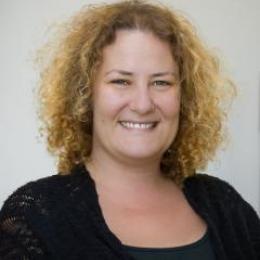