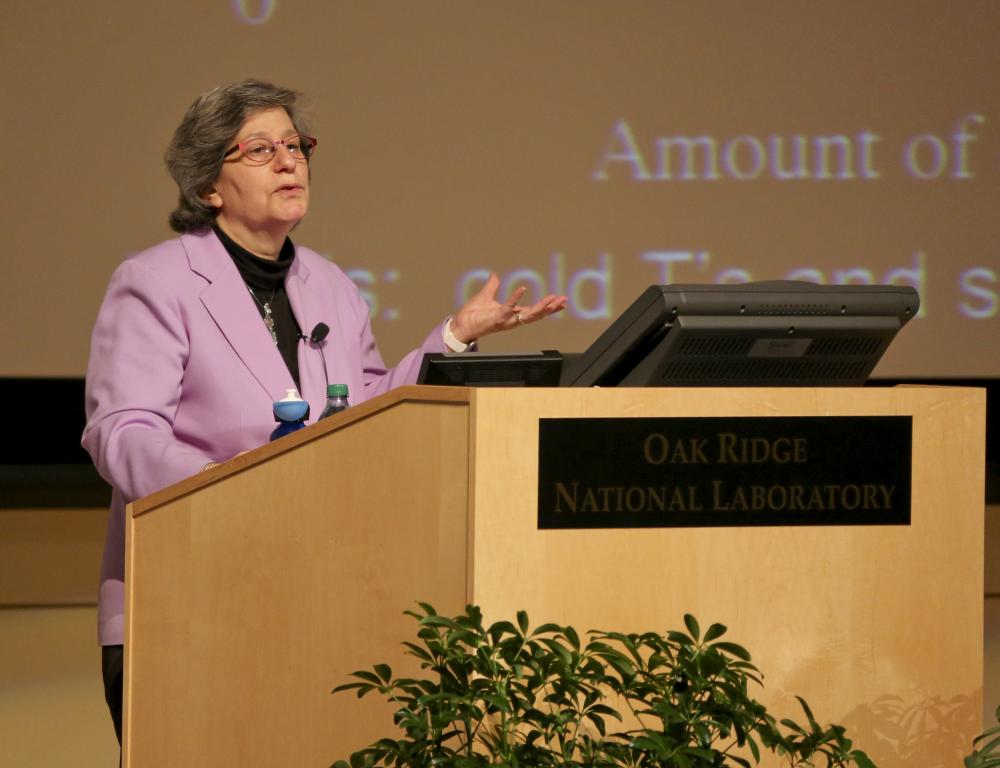 The ozone layer shields Earth from ultraviolet sunlight that can damage DNA and contribute to sunburn, cataracts and skin cancer. Without the ozone layer, life would struggle to survive, Solomon said in her presentation at the Iran Thomas Auditorium at the Department of Energy’s Oak Ridge National Laboratory.

“If we didn’t have an ozone layer we would basically fry,” said Solomon, the Ellen Swallow Richards Professor of Atmospheric Chemistry and Climate Science at the Massachusetts Institute of Technology. “So keeping it healthy is an important environmental issue.”

In the 1970s, researchers recognized that a hole was forming in the ozone layer over the Antarctic. The Antarctic’s low temperatures — lower than the Arctic — promote production of ozone. Solomon’s atmospheric chemistry studies focused on the Antarctic, and she was among the first to suggest that chlorofluorocarbons (CFCs) — a long-lasting derivative of chlorine then used in aerosol cans and refrigeration — were a major contributor to ozone depletion.

“There has been a very dramatic change in the ozone layer. Not a 3 to 5 percent change in a century, but a 50 percent change in a few decades,” Solomon said, but she noted that significant steps were taken globally to dampen ozone stress after the Antarctic ozone hole was discovered.

In 1987, concern about ozone depletion resulted in the development of the Montreal Protocol, an international treaty that aims to protect the ozone layer by phasing out substances responsible for ozone depletion such as CFCs. Solomon attended the negotiations and served as an advisor and, indeed, since the legislation was enacted, CFCs have largely been replaced by other, less destructive substitutes.

“The Montreal Protocol wasn’t just a science success story,” Solomon said. “It was an interdisciplinary success story between science, technology and policy.”

Solomon said that shortly after ozone depletion was recognized, consumers played a large role in pressuring companies to eliminate CFCs from products such as deodorant and hair spray. In the U.S., this caused a large drop in CFC output.

Whether it’s science, consumers or policy, Solomon sees each as useful tools in managing ozone depletion.

“The coupling of all of these was responsible for success,” Solomon said. “The world has clearly put itself on a path to heal ozone depletion.”

From 2002-2008, Solomon co-chaired Working Group I of the Intergovernmental Panel on Climate Change (IPCC), producing a report that highlighted the severity of global warming. In 2007, for their efforts to disseminate knowledge about man-made climate change, the IPCC and former Vice President Al Gore were awarded the Nobel Peace Prize.

For more information on the Wigner lecture series, including past presentations and upcoming lecturers, please see the Wigner Distinguished Lecture Series page.