When Andrew Sutton arrived at Oak Ridge National Laboratory in late 2020, he knew the move would be significant in more ways than just a change in location. The chemist was leaving Los Alamos National Laboratory and New Mexico, his home base for the past decade, to join ORNL’s recently formed Manufacturing Science Division and lead the new Chemical Process Scale-Up Group.

While life itself seemed uncertain for much of the world during the height of the pandemic, Sutton said his transition to ORNL provided a solid foundation in unsettled times, allowing him to focus on one of his primary interests: decarbonization.

“I had spent the bulk of my career working with biomass as a source of carbon that can be used for future energy as an alternative to petroleum,” he said. “But I also wanted to look at ways to improve carbon dioxide capture to reduce atmospheric carbon. These are complex issues, and ORNL has the expertise to further this research.”

“I think it’s important to leverage our capabilities while also building a diverse team and developing strong ties to our sponsors. Then we can enhance our fundamental understanding of catalysis and address real-world needs by transferring technology to industry,” he said. “The long-term goal is to maintain the ability to adapt to any research challenge. If we can do that, we’ll be able to surpass our goals.”

From discovery to marketplace

Over the years, Sutton has kept his eye on not only proving the viability of his research, but also ensuring that ideas move out of the lab space and into production for eventual use by consumers. At Los Alamos, Sutton led chemical catalysis initiatives in bioenergy where he focused on how to develop systems that produce fuels and feedstocks from biomass and then translate those systems into viable technologies for marketplace deployment. This interest in demonstration and deployment resulted in Sutton serving as lead for a team of entrepreneurs in the Department of Energy’s iCorps program, sponsored by the Office of Technology Transitions.

“Working with entrepreneurship development provided a greater appreciation for the real-world application of fundamental chemistry,” Sutton said. “This experience helped me better understand how new technologies evolve into the marketplace, too.”

His interest in supporting entrepreneurs was bolstered by his own scientific breakthroughs. Sutton’s early career research led to the discovery of a chromium-based stable compound that demonstrated, for the first time, a five-fold bond between two metal atoms. Chemistry is based on understanding how bonds between atoms are made or broken, and historically, until Sutton’s discovery, only certain metals were thought capable of more than triple bonds. The work, published in Science, led to new insights into the nature of chemical bonding, and to date, no comparable compound has been found to exist in nature.

Sutton said it was discoveries such as the compound paired with success in converting biomass into feedstocks for fuel applications that have further smoothed the transition to his chemical process scale-up role at ORNL.

“Here, I’m solving those complex problems in chemical conversion so that we can have airplanes running on clean fuels, and we can have power generation with net-zero carbon emissions,” he said. “My team is looking at the processes at the molecular scale in the laboratory and then moving up to full-scale systems and demonstrations.”

A native of England and graduate of the University of Manchester with a PhD in chemistry, Sutton expanded his research scope to the United States through the Universities of California at Davis and Berkeley. He landed there thanks to meeting his future wife, a UC-Santa Barbara graduate student who was completing her final year abroad at Manchester.

“As fate would have it, I followed her to America after graduation,” he said. “It was an easy decision to fly across the pond to sunny California from Northern England.”

After serving a few years as a postdoctoral research associate at the universities, Sutton said he realized he needed to begin a career in a national lab.

“I wanted to do something a little bit more applied and a little bit more impactful to the real world,” he said. “So, I got involved in the Los Alamos Hydrogen Storage Center of Excellence, and my work in hydrogen led to research in biomass conversion.”

In 2011, Sutton co-wrote one of the most significant papers of his career in Science, on the discovery of a novel method to regenerate ammonia-borane, or AB, from dehydrogenated material. AB is a lightweight material with a high density of hydrogen that can be used in fuel-cell-powered applications. However, Sutton said there was no straightforward, efficient way to regenerate AB until he tested a theory.

“I had been wondering what would happen if we used hydrazine with the spent fuel, which is called polyborazylene,” he said. “One Friday afternoon in my lab, I tried it and was able to regenerate the AB spent fuel through a direct reaction with hydrazine and liquid ammonia. It’s perhaps the biggest achievement to date because I essentially created a single-step process for regeneration.”

While Sutton said industry demand will largely determine the success of alternative fuel sources in general, his group will continue to drive impacts in this area.

“We’ve been looking at sustainable aviation fuel, which is a big topic right now. We're converting ethanol into jet fuel,” he said. “We’re really trying to understand how to minimize our carbon dioxide footprint and our greenhouse gas footprint, and aviation fuels is a part of that.”

Sutton said research at ORNL dedicated to carbon dioxide capture is poised for significant progress. Future research will focus on the scaling up of chemical manufacturing and fuel production to further accelerate decarbonization.

“We’re working on building a carbon dioxide capture column right now, and we have lab space just for that,” he added. “The stack is going to be as tall as the building and fill one of the high bays in the National Transportation Research Center. Researchers like Costas Tsouris, with the capture column, and Michelle Kidder, who is looking at how to convert carbon dioxide into another usable source – these are the gamechangers.”

Working with Tsouris and Kidder, Sutton acknowledged, is why he continues his science at a national laboratory — specifically at ORNL.

“This is a diverse lab with the right resources and researchers with the mindset to supplant fossil energy,” he said. “We’re doing science here for the greater good. I’m doing science with like-minded people that I believe will be impactful for the world.” 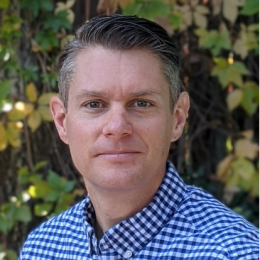