Alex Roschli is no stranger to finding himself in unique situations. After all, the early career researcher in ORNL’s Manufacturing Systems Research group bears a last name that only 29 other people share in the United States, and he’s certain he’s the only Roschli (a moniker that hails from Switzerland) with the first name Alex.

Based on last name alone, it seems only fitting Roschli’s first task as a robotics intern at DOE’s Manufacturing Demonstration Facility (MDF) would be a one-of-a-kind endeavor: designing and assembling valves for underwater 3D-printed robotic arms that allow for the inspection of ship bottoms.

“This was a huge project at the time (2012); we were demonstrating that 3D printed robotic arms could work underwater for the Office of Naval Research,” he said. “My job was to nail down the manufacturing process and perform testing to make sure the control valves operated properly.

From cars and boats to planes and blades

Buoyed by this success, Roschli next shifted his focus to building a future as a researcher at ORNL. An electrical engineer with a master’s from the University of Tennessee, the Kingston native spent three years as an intern at the MDF, continued with post bachelor’s and post master’s work, until he was hired as R&D staff in 2017.

“I’ve stayed with the same group from the beginning and I don’t regret it,” he said. “I’ve been able to see ORNL emerge as a leader in 3D printing.”

In the past six years, Roschli has been a part of the Big Area Additive Manufacturing team, guiding machine operations and software development that enabled the printing of the first 3D printed car – the Strati, which was a precursor to the Shelby Cobra. He’s often the first contact industry has after entering into a collaborative research and development agreement. His job is to program the software for the machines that enable printing and design.

Roschli worked with ORNL’s Slicer, the first software designed to generate machine instructions or tool paths from computer-aided design (CAD) for large-scale 3D printing of metals and polymers. The software is open source and has been applied to numerous 3D printer systems.

“Working with Slicer, I’m supporting processes for recently installed systems, such as the thermoset printer and printing large-scale titanium parts for aerospace,” he said.

“When I begin working with a partner company, I initially ask a series of questions—these are things I do to accelerate the time to effectively have the Slicer software work with the printer,” he said. “I get on the system myself and do some testing and printing and I make sure I have hands-on time with the machine so I can get tuned to the way it should work.”

On occasion, Roschli travels to the industry partner’s work site to troubleshoot software, so that by the time the machine arrives at the MDF, it’s fine-tuned.

Roschli learned as much as possible from mentors and stayed with the project for several years, culminating with a successful demonstration in 2014 and the President holding the robotic arms in the White House.

“I had never seen 3D printing until I came to ORNL, and this was my first research project and it had this kind of impact right out of the gate,” he said.

“You have to learn a lot about a machine’s system to be able to trust it,” he said. “It’s the small things that can cause errors.”

Roschli has recently moved on to working on programming for Slicer 2.

“With Slicer 2, we’re developing code specifically to improve functionality and fulfill our specific needs,” he said. “This Slicer will support more processes than the first one, such as thermal imaging, and this time we’re building to accommodate where we’re heading in the future.”

Whatever the future of additive manufacturing offers, Roschli plans to be a part of it. He just built a home not far from ORNL’s Hardin Valley campus and his work with the lab is in part due to family tradition. His dad recently retired from electrical maintenance at ORNL’s High Flux Isotope Reactor (HFIR).

“I like the people I work with, we’re a great team and that’s how the MDF has gotten to be where it is today,” he said. “We’re dedicated to research and focused on the success of that research rather than the success of an individual. We’re a team that wants to complete projects on time.”

Roschli also enjoys seeing the tangible results of his research, which harkens back to one of the reasons he became an engineer.

“I always liked math, because it’s full of rules and absolutes and there’s a clear, right answer. At the MDF, we can physically see and know that we are making a difference and our work can have a broad impact,” he added. “Our projects move fast; we move onto something new quickly. I think there will always be software work; it may not always be in 3D printing but there will be something new to work on here and that’s why I want to continue to be a part of the team.” 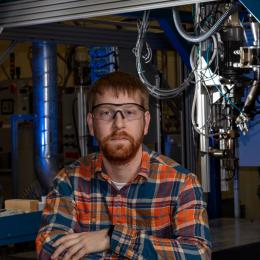