3D printing rises to the occasion 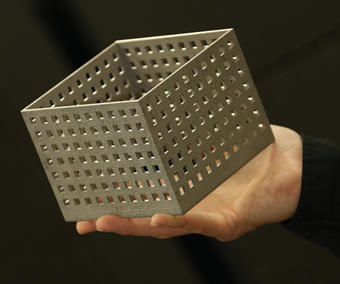 Things have come a long way since the mid-1980s when 3D Systems cofounder Chuck Hull worked out the technology to print objects in three dimensions, one very thin layer at a time. Hull called his new technology "stereolithography."
In it, a guided beam of ultraviolet light is focused on a vat of liquid polymer, solidifying areas where it hits. When one layer is complete, the platform holding the object lowers a bit, and the process is repeated.

The technology was impressive but limited, with the printed objects serving as prototypes but not much else. In the intervening decades, and especially in the last few years, 3D printing has made it to the big time, taking off both in capability and application.

ORNL's focus on printing is led by the the Deposition Science & Technology Group within the Manufacturing Demonstration Facility. The DST is young, created just this year. According to group leader Chad Duty, it works with a variety of advanced manufacturing technologies such as carbon fiber, magnetic field processing and printed electronics.

And, of course, the group works on additive manufacturing. In this realm its role is a combination of research and education. On the research side the group is making use of ORNL's unique strengths, including materials science, neutron imaging and supercomputing.

"There are several areas where it makes sense for a national lab to be doing this," Duty says. "One is that we can leverage all the historical strengths of a national lab and bring it to bear on this new technology front."

For instance, warping is a big issue for systems that build parts one layer at a time. The component gets very hot at the point of melting, but surrounding areas may stay cool, depending on the technology. Electron beam systems keep the whole assembly at about 700 degrees Celsius (roughly 1,300 degrees Fahrenheit), which helps to minimize warping. Laser beam systems, on the other hand, don't heat the surrounding material, so warping is a greater issue.

Duty's group is working with Ralph Dinwiddie of ORNL's Scattering and Thermophysics Group to measure temperatures across the printing surface as the component is being produced. The thermal imaging techniques pioneered by this collaboration will allow for a better understanding of temperature differences and, ultimately, the development of ways to reduce warping.

Quality control is also an issue, one that is especially important in areas such as medical implants or aerospace manufacturing. In response, Duty's group is working with ORNL neutron scientists at both the Spallation Neutron Source and the High Flux Isotope Reactor, using the unique ability of neutrons to look inside materials without damaging them.

"The neutron source can bring a new way of inspecting these materials, optimizing them and reducing residual stress in these components," Duty says. "There's no other way to nondestructively evaluate those kinds of systems."

Supercomputing is also helpful when Duty and his colleagues look at structural issues associated with additive manufacturing. He has been working in this area with Sreekanth Pannala of ORNL's Computer Science and Mathematics Division.

"It's a pretty complicated system, and that's just for one weld beam line across a material. In a cubic inch in the Arcam electron beam technology, we've got five miles of weld line," Duty says.

Duty and his colleagues are also working in a wide range of other areas designed to push forward both the technology and its application in American manufacturing. They are working to improve the materials being used, contributing to the development of high-performance metal alloys and stronger polymers that incorporate carbon fibers. They are working to improve the manufacturing process in an initiative Duty identifies with the slogan "Bigger. Faster. Cheaper."

And they're working to educate manufacturers about what the technology can and can't do. This involves helping manufacturers learn new things and unlearn old ones.

"We're in a kind of second birth for additive manufacturing," Duty explains. "It went through a phase [in the 1980s] called 'rapid prototyping,' and some people were saying, 'It can do everything; we'll do away with all other types of manufacturing.' And then it cooled off.

"A lot of folks went through that cool-off period. They tried it, it didn't work, and they've written it off. And they think this is the second verse of the same song. We help them take another look at it."

One challenge that requires both the technical expertise found across the lab and Duty's personal role as a technology evangelist is something he refers to as "the valley of death"—the collection of practical limitations that prevents a wonderful idea in the laboratory from making it into production.

"That's kind of why my group exists: to help companies transition things that are really cool to things that are commercially relevant," Duty says. "One of the things we do in a manufacturing demonstration facility is demonstrate the technology, show people what can be done with that technology, start their wheels turning, and help them work through problems in their industry where it can be useful."

In fact, Duty says, additive manufacturing is not appropriate in every situation. If you're producing 10,000 simple, inexpensive brackets a day for the automotive industry, chances are pretty good that making that bracket on a 3D printer is not a good idea. On the other hand, if you're making a low-volume component that is expensive, complex and specialized, Duty and his colleagues would like to talk with you.

"The areas where it's really getting initial traction are where you would expect," Duty says. "It will be in those areas that have really high margins, like biomedical, aerospace, defense and nuclear. In general, these are areas where the parts are really complex, highly customized and produced in low volumes."

Complexity is not a bad thing in additive manufacturing; it's not even that much of a challenge. Because these systems build a structure one layer at a time, they don't care how complex it is. In fact, a complex mesh is an easier job for additive manufacturing than a chunk of metal. The Arcam system, for instance, can lay down about 5 cubic inches of material in an hour, whether that material is spread out over a fine mesh or plopped down as a cube.

This new reality takes some getting used to.

"It's completely non-intuitive," Duty noted, "which is why it's so paradigmshifting. People think, 'I can really make this into something useful, but it would really complicate the design.' And we say, 'That's good; we can make it faster and cheaper for you if you do that.'"

For example, his group was working with a company that produced impeller blades, rotors within a pipe that have the job of increasing or decreasing fluid pressure. The company asked them to duplicate the part exactly.

The problem—or more accurately, the opportunity—was that the piece had been designed for casting, with the angles, thicknesses and other compromises that are necessary when you pour molten metal into a mold.

Duty and his colleagues certainly could make an exact duplicate of the impeller, but they were convinced they could do better. So they asked the company to redesign the piece for additive manufacturing.

"They took two days to do the redesign," he says, "and we made the other version. We tested it out; it met all the performance metrics, and it was 56 percent lighter because they got the wall thicknesses down. For a rotating piece of machinery, weight reduction is huge."

The story illustrates both the potential of additive manufacturing and the challenge it presents to existing ideas of what manufacturing involves.

"If you're trying to use additive manufacturing to make the exact same thing that you're already making, you're using it wrong," Duty explains. "You're not thinking about it right. The real potential and opportunity here is to do things that you can't do today."