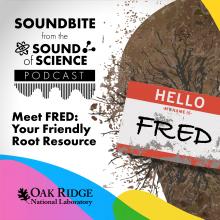 Soundbite of The Sound of Science

JENNY: Hello everyone, and welcome to a Soundbite from “The Sound of Science.”

JENNY: In our last two episodes, we traveled to Alaska and Minnesota to explore two environmental research projects that ORNL leads for the U.S. Department of Energy.

MORGAN: SPRUCE and NGEE Arctic are both large-scale experiments that are examining the effects of climate change on vulnerable ecosystems like peatlands and the Arctic tundra.

JENNY: Both of these ecosystems store a vast amount of carbon below ground. As temperatures rise around the globe, scientists are concerned that these carbon sinks may turn into carbon sources.

MORGAN: Scientists are studying soil, roots, microbes and plants to get full picture of how the rising temperatures are affecting these landscapes.

JENNY: Colleen Iversen is a senior staff scientist in ORNL’s Environmental Sciences Division who conducts research in both projects. She studies the plant roots growing in these unique ecosystems.

COLLEEN IVERSEN: So the things that I'm particularly interested in are sort of the hidden world beneath our feet, what's happening with the tangling of plant roots with the surrounding soil. And in particular, because soil stores twice as much carbon as what's in the atmosphere. And so, we really would like to understand how long that carbon will stay in the soil, and whether or not it will be released back to the atmosphere as carbon dioxide or methane. And roots play a really important role in contributing to the accumulation of carbon in the soil. And they're also so important to keep alive those towering trees, because they do all the work, they take up the water and the nutrients for the plant.

MORGAN: Colleen and her colleagues collect tons of data from SPRUCE and NGEE to inform computer models, which enable scientists to predict the future of each ecosystem – and the global climate.

JENNY: Of course, SPRUCE and NGEE only represent two distinct places, and scientists want to understand these effects around the world. But to do that you need good data to inform the models.

MORGAN: Colleen found the data was particularly lacking when it came to factoring in roots to climate change scenarios.

COLLEEN: One of the first things I wanted to understand in these models that encompass the entirety of the land surface, and project 100 years into the future, how are they representing what's happening below ground? How are they representing the interface between plants and the soils, which is roots. And in some cases, I found model representation of roots to be forced. In some cases, the modelers told me they were implied, which I didn't appreciate. They aren’t there, but they're doing something. And in other cases, models were using parameterizations, or observations for roots, pretending that all of the 400,000 plant species in the world had the same kind of roots doing the same thing.

MORGAN: This lack of consistent data inspired Colleen to create a one-stop shop for root data that modelers could access from anywhere.

MORGAN: FRED is a collection of root trait data from research performed around the world.  Understanding these traits, or characteristics, helps modelers have better grasp of the important roles that roots play in the larger ecosystem.

COLLEEN: First we actually started bringing those data together from the tundra. That's where we were first sort of interested in understanding what was happening below ground. And then we decided to expand that to the world, the land surface of the world, into a giant database.

JENNY: And thus, FRED was born. There’s actually a pretty amusing story behind the name of the database.

COLLEEN: The interns wanted to name this new database, the Fantastic Root Ecology Database, or FRED. But we wanted to publish a paper about it. And we did not think that the reviewers would appreciate us telling them it was fantastic. So we decided to rename it the Fine Root Ecology Database, because fine roots are narrower than two millimeters in diameter, narrower than this cord that's connecting my headphones to my computer. And those are the roots that are doing the work of acquisition of water and nutrients for the plant.

MORGAN: So where does all this data come from?

COLLEEN: We bring in data in a lot of different ways. We have awesome interns who work with us who go to the literature that's already published to bring together the root traits there. So it's kind of all in one place instead of in a lot of disparate papers. But we also have researchers who will contribute data to this. It could be either “you missed this paper that I wrote, and it's amazing. Can it go into FRED?” Or it can be, “here are some data that we haven't published yet. But we want people to be able to use them either for comparing to their own data that they're collecting, or for modelers to use to be able to better represent this type of plant in their models.” So there are lots of different ways that data gets interpreted.

JENNY: Root observations are tagged with a geolocation when they’re entered into FRED. This gives Colleen and her colleagues the ability to make a map of where this data is coming from, which is helpful in understanding different root traits.

MORGAN: By mapping the data, scientists can also see where more information is needed.

COLLEEN: Really we need more data from places like the tropics and like the tundra, and it's great because the Department of Energy is funding programs for us to go and make new observations in the tropics and in the tundra, and some of those observations are of what roots are doing. And so, in that way, we can contribute to this increasing amount of knowledge in FRED.

JENNY: FRED was first published in 2017. Since then, it’s been downloaded hundreds of times.

COLLEEN: Folks are using it to compare to their own data, but they're also using it to do global analyses to understand differences across the world. And it's been downloaded almost 200 times by folks who want to use it to inform their models, which has been particularly exciting for us, because that was kind of the reason that we started FRED in the first place in the hopes that we could better represent roots in these terrestrial biosphere models.

MORGAN: The database is constantly being improved. The newest version was released in March 2021 and allows users to search and download specific data.

COLLEEN: It used to be whenever you would come and download data from FRED, you would get it all. So the giant file of all of the root traits out of 150,000 observations of root trait data from across the world – you’d get it all. But we know that a lot of folks are very excited about their particular species of interest or particular places in the world. We made FRED into a searchable interface. You can just come and search for the species they're interested in or the particular trait you're interested like root nitrogen, or a particular specific place in the world like the Arctic tundra. And so that was something that we were really excited about for this most recent release is that it's very much more targeted towards people's particular interests.

JENNY: The root data compiled in FRED is incredibly valuable, but the good news is it’s completely free to anyone who wants to use it.

COLLEEN: Something that the Department of Energy has encouraged us to do, which I so appreciate, is to make sure that taxpayer-funded data observations and research are freely available to other scientists and to the public. And so when we brought all of these data together in FRED, the Fine Root Ecology Database, it was really important to us that they be freely available for download.

MORGAN: So if you’re a roots nerd like Colleen – or just want to learn more about the project, check it out at roots.ornl.gov.

JENNY: Thank you for listening to this Soundbite from “The Sound of Science.”

MORGAN: Whether you’re interested in roots or reactors, be sure to subscribe to the series wherever you get your podcasts so you get new episodes as they’re released.

JENNY: Until next time!