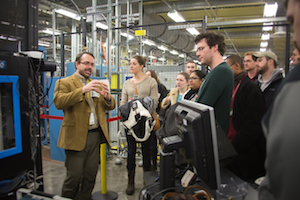 “The tour of SNS put some realism to all of the intense classwork they did during the two-week program,” said John Galambos of ORNL’s Research Accelerator Division, who coordinated the student tour.

ORNL accelerator scientists served as instructors and mentors, as well as tour guides, for USPAS, which brought 150 visitors from approximately 65 different international institutions to the University of Tennessee at the end of January.

USPAS is a national consortium seated at Fermi National Laboratory in Illinois, and is held twice a year at universities across the U.S. It’s a one-of-a-kind graduate education program in particle beam science and associated accelerator technologies. Teachers come from national laboratories, universities and private industry and cover “the broad spectrum of material needed to adequately represent the diverse, multi-disciplinary field of beam physics and accelerator technology,” according to USPAS.

In the 1990s, before the Spallation Neutron Source was built, ORNL staff turned to USPAS for graduate-level education in the relevant aspects of high power particle accelerators.

“USPAS is really the only place for this kind of education,” said Galambos. “We benefitted a lot from USPAS during our early years, so teaching during this year’s program is a great opportunity to give back to the science community. It’s extremely rewarding.”

During the two weeks, instructors and teaching assistants were with the students day and night, working until midnight and even later most nights.

“Learning a whole semester of coursework in just two weeks is no small feat. It takes phenomenal instructors and dedicated classmates,” said Eric Barrowclough, a USPAS student who’s a PhD candidate in chemistry at the University of Tennessee. “But at the end of the two weeks and when the fog around my head had cleared, I found myself realizing how much I had learned and still want to learn about the field of accelerator physics.”

Beyond the classroom experience, the ORNL team offered a tour of the world's most powerful pulsed proton linear accelerator: ORNL’s SNS.

“The best part for me was seeing their faces light up in the SNS tunnel,” Galambos said, “something many researchers never get to see.”