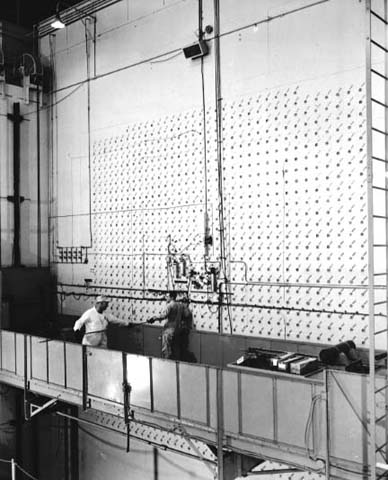 In the early, desperate days of U.S. involvement in World War II, American scientists began to fear that the German discovery of uranium fission in 1939 might enable the Nazis to develop a super bomb. Afraid of losing this crucial race, the United States launched the top-secret, top-priority Manhattan Project.

The plan was to create two atomic weapons—one fueled by plutonium, the other by enriched uranium. Hanford, Washington, was selected as the site for plutonium production, but before large reactors could be built there, a pilot plant was necessary to prove the feasibility of scaling up from laboratory experiments. A secluded, rural area near Clinton, Tennessee, was chosen both for the full-scale production of enriched uranium and for the pilot-scale production of plutonium.

The Graphite Reactor, designed for this second purpose, was built in only nine months. Its job was to show that plutonium could be extracted from irradiated uranium slugs, and its first major challenge was to produce a self-sustaining chain reaction.

Workers began loading uranium into the reactor during the afternoon of Nov. 3, 1943, and progress was swift. Before dawn on Nov. 4, Enrico Fermi was summoned from a nearby guest house. The reactor "went critical" at 5 a.m.; less than two months later, it was producing a third of a ton of irradiated uranium a day. Two months after that, Oak Ridge chemists produced the world's first few grams of plutonium.

During the 20 years the Graphite Reactor operated—from 1943 to 1963—it continued its pioneering role. It produced the first electricity from nuclear energy. It was the first reactor used to study the nature of matter and the health hazards of radioactivity. And for years after the war, it was the world's foremost source of radioisotopes for medicine, agriculture, industry, and other purposes.

"They decided to build this little pilot plant."

Charlie Moak was the first member of his research group to arrive in Oak Ridge from the University of Chicago Metallurgical Laboratory in August 1944. A "lowly research assistant" during the war, he went on to become director of ORNL's Van de Graaff Laboratory and to retire from the physics division in 1985. 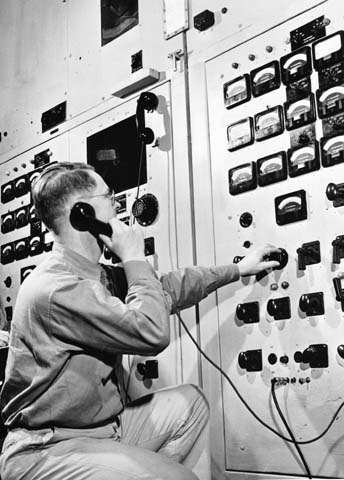 "The primary mission of the Graphite Reactor was to demonstrate the production of plutonium from uranium in a reactor," Moak said. "Those reactors to be built at Hanford constituted a big step, and to be sure the reactors were going to work, they decided to build this little pilot plant in Oak Ridge. We produced a tiny, tiny amount of plutonium that would be separated out in our chemistry section. These small samples would then be hand-carried to the University of Chicago for further study. Later, the Hanford reactors went critical and produced plutonium used in the atomic bomb.

There were many people doing experiments around the Graphite Reactor in the early days. They studied lattices—the ratio of graphite to uranium in the reactor—for producing optimal results. This work literally became the substance of textbooks on reactors.

Much of the work concentrated on finding out which elements in the periodic table ate up neutrons and which didn't, so you could build a reactor out of construction materials that did not absorb neutrons. This was very big business.

The production of radioisotopes also was important, but it did not achieve great significance in medicine, metallurgy, and all the other applications until after the war. But they did build high-intensity radioactive sources for studies on human health. People wondered which creatures would make the best models for the human being. So they irradiated anything from spiders to mice, on up to goats. There was a lot of biological research going on.

The project had industrial priority at the very top level. We only had to tell our procurement people to find something and they would find it. The other most impressive thing was that if there was an idea on how to do something like separate uranium, there were calutrons, gaseous diffusion separation, and thermal diffusion separation. They didn't just pick one; they did them all. They didn't have any hesitation about duplicating effort.

After Hiroshima and Nagasaki, there was a sense of relief that the bomb had stopped the war. We had a number of members of our staff with brothers in the Pacific who would have gone in with waves of invading forces on the home islands of Japan. And we really believed—and I still do to this day—that the atomic bomb, overall, saved a lot of lives.

Looking back on that time, I'd have to say it was exciting. Secondly, I believe it was worthwhile. Thirdly, I believe that sooner or later, we're going to learn how to burn nuclear fuel cleanly. And if we do, I think the work we started here is going to benefit mankind tremendously.

City in a fence

"I've never seen or heard of anything like it."

Leroy Jackson transferred to Oak Ridge from the U.S. Army Corps of Engineers' Manhattan District in February 1943 to conduct site planning for the housing that accommodated the scientific staff at the Graphite Reactor as well as thousands of other workers on site. He retired in June 1974 from the Atomic Energy Commission as assistant manager for engineering and construction of Oak Ridge Operations.

"When I arrived in February, land acquisition was taking place on a crash basis," Jackson said. "I believe about 55,000 acres were taken initially. The Corps had the responsibility to condemn the land under eminent domain and the residents were only given 90 days to move.

The number of houses we started out with was really low. In December, we were looking at a town of about 500 houses. By February, it was 3,000. Eventually, it went as high as 8,714, although some of them I'd hate to call a house. The Cemesto houses, for top scientific, administrative and operating people, were pre-cut and assembled here. Then we got to fabricating houses in sections, complete with electrical, furniture, curtains, everything. We also had an intense parallel program to take care of the mass of construction workers that were coming from many states. We brought trailers in from all over the eastern half of the United States—about 6,000 of them—which were located around central bathhouses.

Separate from the trailers, we had "hutment" areas for white men, white females, black men, and black females. They were 16' by 16', I believe, with just a wood floor, 2" by 2" studs, a skin sheet of plywood, and a potbellied stove. Then we had pre-fab military barracks for the special engineering detachment. We also had 98 dormitories housing 140 or 150 apiece.

People were being brought in from all over the United States to work here, and this sometimes required special arrangements. In the cafeteria set up for black workers, for example, you had people from various regions who were used to different kinds of seasonings. Southern Louisiana is very different from the eastern end of North Carolina. So the cafeteria line was split—a higher level of seasoning over here than over there. You see, most of the people in construction were working a 70-hour week, and longer. So you were trying, at least, to keep their stomachs full and not too unhappy.

The work force also needed some other very limited facilities, so we built drugstores, barbershops, grocery stores, schools, a few crude theaters, two churches. And people went to church in theaters, in school gymnasiums. At the same time, you had massive construction of sanitary water plants, a water distribution system, sewer lines, power lines. Mostly, there were two 10-hour shifts, but road grading and some other work was conducted around the clock.

I've been in this business for many years. But I've never seen or heard of anything like the scope and the speed of this Manhattan Project construction. It's one in the world."

Alvin Weinberg worked on the mathematics of chain reactions at the University of Chicago alongside nuclear pioneer Eugene Wigner. When Wigner brought a half dozen colleagues to Oak Ridge in May 1945, Weinberg was the first to arrive. Thirteen years later, at age 38, Weinberg was appointed director of Oak Ridge National Laboratory, retiring from that post in 1974.

"The work that took place at the Graphite Reactor had ramifications for many fields of science," Weinberg said. "This was the place, for example, where mammalian radiation biology in its modern sense really originated. The reactor had important implications for the development of nuclear power, both for naval submarines and for electric utilities. It had great influence, from the very beginning, on materials research, particularly the fields of neutron diffraction and radiation damage to solids. And then, of course, it was the first place where isotopes were produced for every science you can think of.

After the war, our purpose seemed very straightforward. We would be at the vanguard of the development of nuclear reactors. The central technical task was first to build a very powerful research reactor which would create the environment—temperature, radiation, and so on—that a power reactor would experience.

One set of experiments conducted at the Graphite Reactor turned out to be immensely important. It went like this: If you're trying to figure out how to make a nuclear reactor for nuclear power, you have all sorts of choices because there are various kinds of fuels—plutonium, enriched uranium—various kinds of coolants—water, gas, liquid metal—and various kinds of moderators—graphite, heavy water, light water. Well, I was very enthusiastic, even during the war, about trying out ordinary water as a coolant and as the moderator. So we did a whole series of experiments on the top of the reactor, which showed that you could use ordinary water if you just added a little bit of extra uranium 235. And that was how the light water reactor got started. Now it is the dominant kind of nuclear reactor.

Another function of the Laboratory at that time was the establishment of a training school, the Oak Ridge School of Reactor Technology, which we colloquially called the Clinch College of Nuclear Knowledge. Most illustrious of our graduates was none other than H.G. Rickover, father of the nuclear navy.

There were other missions. The most important, I suppose, was the production and distribution of radioisotopes. Much of the work that led to unraveling the genetic code could not have been done without them. They are used in the diagnosis and treatment of cancer. They are used in agriculture to trace phosphorus in fertilizer, and in innumerable other ways. Science couldn't continue today without them. If God has a golden book and writes down what it is that Oak Ridge National Laboratory did that had the biggest influence on science, I would guess that was the production and distribution of radioisotopes."

The oldest reactor in the world, the Graphite Reactor was designated a historic landmark by the U.S. Department of the Interior in 1966 and by the American Nuclear Society in 1992. It is part of the DOE Public Bus Tour, which originates at the American Museum of Science and Energy in Oak Ridge.