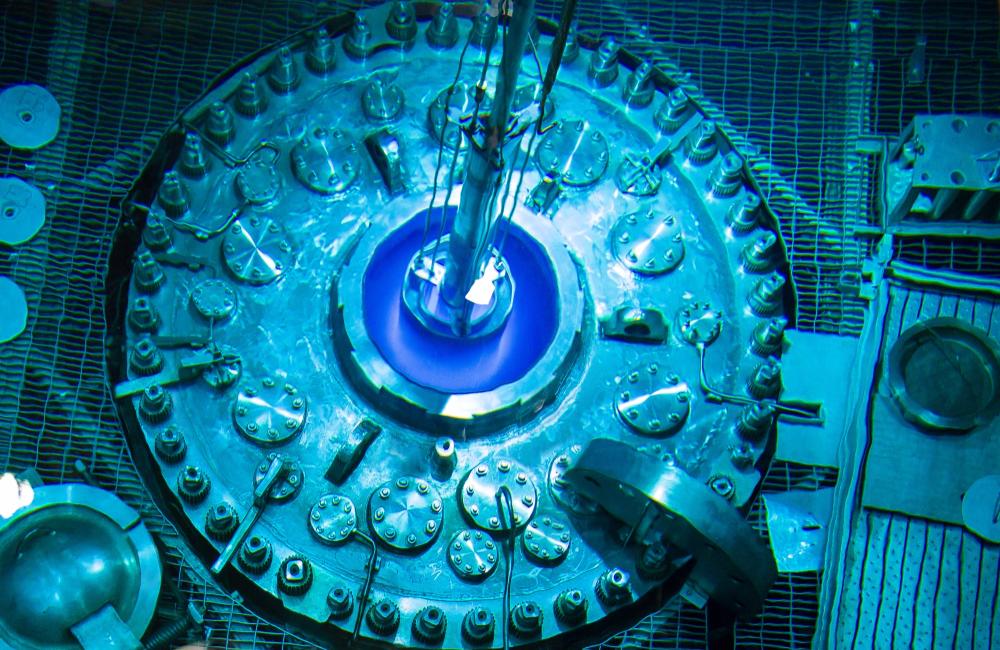 ORNL’s High Flux Isotope Reactor provides one of the highest rates of continuous-beam neutrons of any research reactor in the world. Image credit: Genevieve Martin, ORNL

Of the techniques available for studying the structure and dynamics of matter at the smallest scales, neutron scattering is distinguished by the fact that it interacts with an atom's nucleus.

This fact—combined with the fact that neutrons carry no charge—allows researchers to explore matter in ways that are otherwise impossible. In particular, neutrons can analyze materials that contain both light and heavy elements.

Other scattering techniques use photons—which include both visible light and X-rays—and electrons. Because both photons and electrons interact with an atom’s electron shell, they are very good at seeing heavy elements, which have a lot of electrons; think of a dental X-ray.

But while photons and electrons scatter off an atom’s electron cloud, neutrons penetrate to an atom’s nucleus and give you very different information.

"There is a ton of science we do that comes from the unique sensitivity of neutrons to light elements," ORNL physicist Hassina Bilheux said. "If you look at a tissue sample, the X-rays can see the bones, but the neutrons are sensitive to light elements—they see the soft tissue around the bone. That's the complementarity between neutrons and X-rays in imaging."

Because they carry no charge, most neutrons travel through a material without interacting with it. This is both a boon for researchers and a challenge to neutron scattering facilities (see “SNS upgrades will benefit researchers,” page 12).

"One of the things with neutrons is they scatter fairly weakly," said Hans Christen, director of ORNL's Neutron Scattering Division. "The majority of the neutrons just go straight through, and most of the neutrons, if they interact once, they will not bounce again. This makes calculations of how neutrons scatter easier than in the case of electrons or photons, which in turn helps to compare measurements to model predictions.”

Perhaps an even more important upside to this weak scattering is that neutrons easily penetrate materials that would stop X-rays or electrons, including the containers that must sometimes hold samples. This helps researchers study quantum materials, for example, which must be chilled to temperatures near absolute zero.

The penetrating power of neutrons also allows researchers to look within materials, which is helpful when, for instance, you want to look at a weld without having to cut the metal open.

"We are able to measure averaged strain using neutron radiography," Bilheux said, "which basically tells you how material deforms as you pull or compress it. Using imaging, we are able to give information about the strain through the thickness of the sample. It's pretty neat, because you can start looking at large objects, and it’s nondestructive."

"Neutrons are sensitive to magnetism," said Matt Tucker, leader of ORNL's Diffraction Group, "so they can be used to determine the magnetic structure as well as the atomic structure. Often the details are not the same, and knowing those differences can tell you about fundamental physics, but also about useful properties of the material."

Neutrons' magnetic properties also make them valuable for studying quantum materials, which are showing promise in areas such as quantum computing, quantum encryption and advanced sensors.

How we make and use neutrons

Neutron scattering involves creating a beam of neutrons, passing that beam through a sample, and noting where (and possibly when) neutrons scattered from the sample hit a detector. At SNS, a particle accelerator sends protons to collide with a heavy metal target to produce the neutrons in a process known as spallation. At HFIR, neutrons are produced by a nuclear reactor.

Researchers can glean a wide range of information from neutron scattering—how atoms are arranged, for instance, how they're held together, how they're moving around, or which way their own tiny magnets are pointing. Neutrons can zoom in to examine material properties at the atomic scale or, at the other extreme, give you a picture of something as large as a machined part or a living plant.

This impressive range of research depends on the nature both of the neutrons and of the equipment used to study them.

Neutrons must be slowed substantially before they interact with matter in a way that is useful to researchers. This is done through a process called moderation, in which the high-energy neutrons bounce around in a vessel typically containing hydrogen.

If water—whose molecules contain two atoms of hydrogen and one of oxygen—is used as the moderator, the emitted neutrons have energies that are characteristic of room temperature. These are called thermal neutrons, and their wavelengths are useful for analyzing the atomic structure of a material.

"A thermal neutron has a wavelength that peaks at about 1.8 angstroms, with an angstrom being characteristic of the distance between atoms in a crystalline solid," explained ORNL physicist Ken Herwig. "Having a wavelength of about that distance means that thermal neutrons are sensitive to atomic length scales."

To probe the longer length scales characteristic of proteins, polymers and other “soft” materials, neutrons with longer wavelengths are needed. These “cold” neutrons are created using moderators at much lower temperatures. Cold moderators at SNS are liquid-hydrogen-cooled to about 20 kelvin—or minus 423° Fahrenheit.

To obtain a variety of information from neutrons, scientists rely on specialized instruments, with 18 instruments currently residing at SNS and 13 at HFIR. While they explore different aspects of matter, the techniques can be divided into categories such as elastic and inelastic scattering.

“In elastic scattering, it’s a bit like bouncing Ping-Pong balls,” explained Christen. “The scattered particles don’t lose any of their kinetic energy, but from the way they scatter, we can determine where the atoms are in the material.”

“To determine a material’s atomic structure, we shine a beam of neutrons through the material and use a physics equation called Bragg's law," Tucker said. "This law basically says that if there are planes of atoms inside the material, when we shine neutrons at a material, they will bounce off these atomic planes and come out in very specific directions depending on how those atoms are arranged and with a specific brightness depending on the types of atoms present in that plane.”

"That will tell us where each particular atom type is located, and then we relate that atomic structure to the properties of the material. Is it a strong material? Is it a weak material? Could it potentially make a good battery material?"

At ORNL, neutron diffraction has been used in a wide range of research, helping researchers search for more reliable cladding for nuclear fuel, better catalysts for producing fuels, and materials for safer and longer-lasting batteries.

"With inelastic neutron scattering, the neutron loses or gains some energy by its interaction with the material," said Mark Lumsden, leader of ORNL's Neutron Spectroscopy Group. “By studying the neutron energy change, we can understand the energy of the interactions between atoms or spins in a material.”

Neutron spectroscopy can be used to analyze biomaterials or soft materials such as polymers, Lumsden noted. It is also useful in studying thermoelectric materials and quantum materials.

A third application of neutrons is neutron imaging—possibly the most easily understood technique. In essence, researchers are making radiographs using neutrons instead of visible light.

Neutron imaging typically looks at scales 100,000 or more times larger than neutron diffraction, Bilheux said—tens to hundreds of micrometers rather than tenths of a nanometer. The technique is useful for research into everything from battery efficiency to water uptake in plant roots.

For example, researchers can put a lithium-ion battery in a neutron beam and examine how well the lithium moves between the battery's anode and cathode over time. The ultimate goal is to develop batteries that last longer and charge faster.

Neutron imaging can also analyze how root systems absorb and manage water under different environmental conditions. In fact, researchers can put living plants in a neutron beam without damaging the plant.

“You can put a root system in the soil, put a pulse of water at the bottom of your can, and see how the roots are taking up water from the surrounding soil,” Bilheux said. “The advantage of putting a plant in the neutron beam is we don't damage it.”