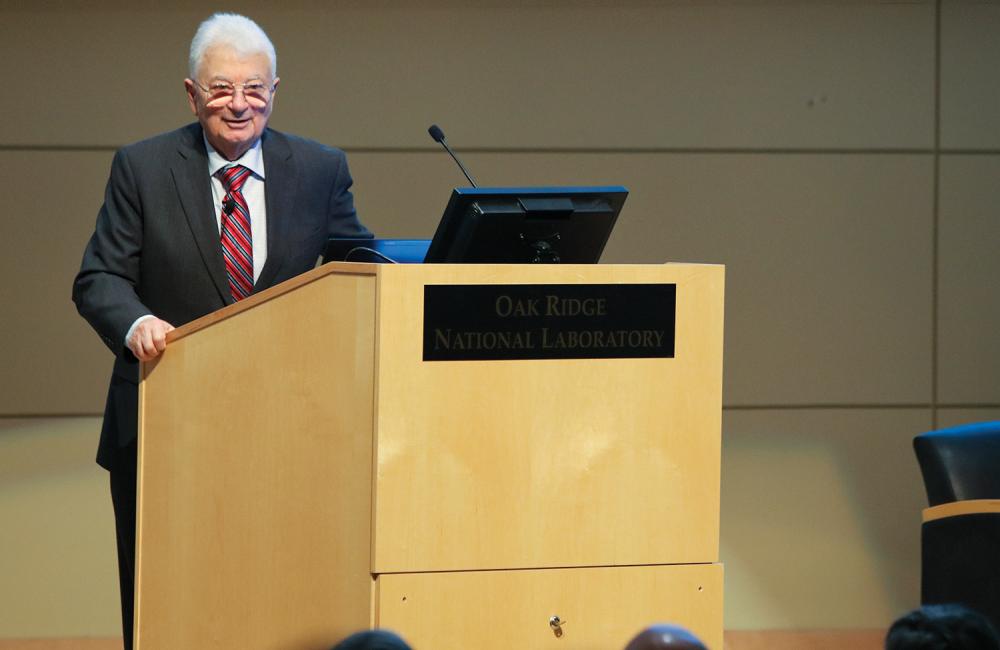 Yuri Tsolakovich Oganessian, a Russian nuclear physicist and leading researcher in superheavy elements, collaborated with ORNL scientists in the discovery of tennessine, an element with atomic number 117.

Oganessian is a scientific leader of the Flerov Laboratory of Nuclear Reactions, one of eight laboratories at the Joint Institute for Nuclear Research in Dubna, Russia. In 2016, the International Union of Pure and Applied Chemistry named element 118 “oganesson” in his honor, making him only the second person to give his name to an element while he was still living (the other was American physicist Glenn Seaborg).

Oganessian delivered the Eugene Wigner Distinguished Lecture Jan. 27, 2017, on the topic “Discovering Superheavy Elements.” This is an edited transcript of our conversation following his lecture.

1. How did you first become interested in working with superheavy elements?

After university I came to the Flerov group as a young physicist. Flerov was a leading scientist in this field, and I started to think—like these people were thinking—about superheavy elements. When I started to understand more, after my education, I came to the conclusion that this really is a very exciting and interesting field, and I didn’t change it.

2. Why is this work important?

First of all, it’s important because it changes a little bit our understanding of the surrounding material world. Fifty years ago, at the time I started to work, we had a certain view about the limits of this work. The idea that there is a so-called island of stability proved this limit.

On the question of how many elements may exist, 50 years ago we would have said 100 only. We are now at 118 [oganesson], and we believe that we can move further.

3. How do international collaborations such as the one that produced tennessine help in the search for superheavy elements?

You can’t make something significant in science alone. You have to take other cultures from different areas of the world and get them together, and then maybe you may succeed.

4. What can we expect in the future for superheavy element research?

That’s a very good question. Here is a question which I ask my people: “We’ve done this research for 25 years, and we made it. If you start today to do the same things, how fast will you succeed?”

It’s quite interesting. If you put in the one hand all you know about superheavy elements, and in the other hand you put all the progress which we have made in computer science, plasma physics, chemistry, computing and so on [areas that support superheavy element research]—if you put them together, what improvement factor can we get to make our research better [more sensitive]?

So in 15 years you may get a factor of 100. Based on such a statement, we decided to build a so-called superheavy element factory to get this factor of 100. A superheavy element factory is not a device; it’s a collaboration. Oak Ridge may develop the reactors and develop new technologies for targets. We now are trying to build big, new accelerators which will have beams 10 times more intense. And together we are looking for new detectors, new separators—these are intellectual parts of the experiment. All this together will give us a factor of 100. And this will make us understand this new land of superheavy nuclei.

We don’t know what they will look like, these superheavy nuclei and superheavy elements. But by understanding the properties, we may have a prediction for new, more heavy ones. We hope to have the first beam of a new accelerator at Dubna at the end of this year.

5. What role do you see for ORNL in this work?

The role of Oak Ridge is as a partner. We have to do it together. This is what collaboration is about. Otherwise I am not sure we can really have a result such as we have today.