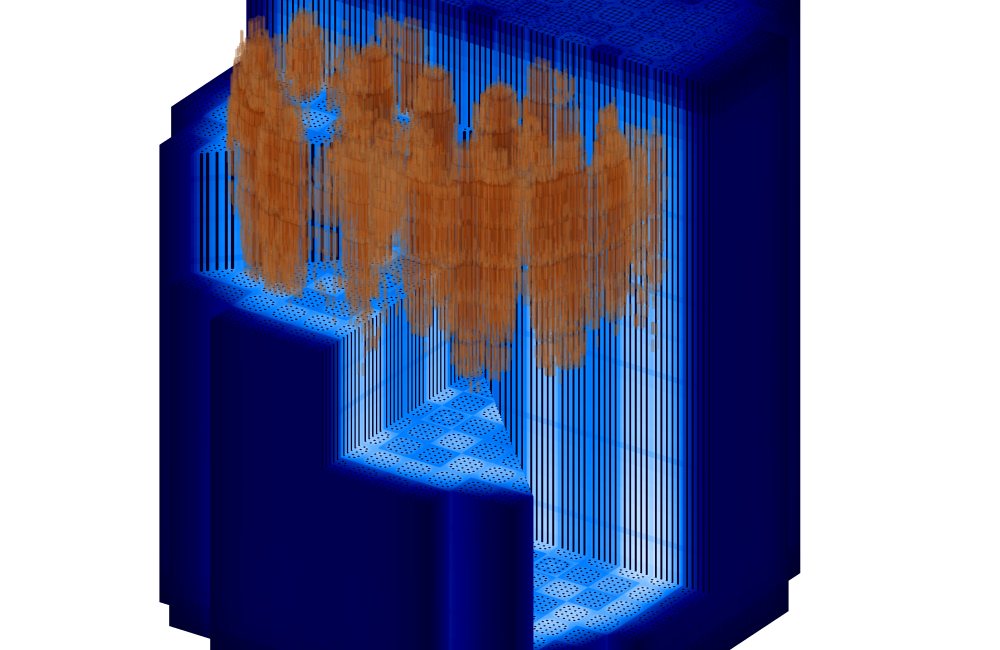 View a hi-res version of this image
This visualization shows the development of crud in Unit 1 of the Watts Bar Nuclear Plant. Image credit: Benjamin Collins, ORNL
Topic: Nuclear Science and Technology

Researchers with the ORNL-based Consortium for Advanced Simulation of Light Water Reactors have performed the first major computational simulation of the operation of a nuclear power reactor.

Using a software suite known as the Virtual Environment for Reactor Applications, or VERA, they modeled the first 18 years of operation at Unit 1 of the Watts Bar Nuclear Plant, located near Spring City, Tenn., about 50 miles southeast of ORNL.

Watts Bar 1, which began operation in 1996, is about halfway through its 40-year licensing period. So far, CASL has modeled a dozen 18-month fuel cycles, calculating levels of atom-splitting neutrons, fuel temperatures, radiation transport and the behavior of heated water.

The consortium also modeled the buildup of unwanted iron and nickel deposits on the fuel rods. The deposits, known in the industry as “crud,” come from the corrosion of equipment elsewhere in the plant—primarily piping and the steam generator—and can affect the distribution of power generation in the reactor core.

The two simulations validate both CASL’s partnerships and its methods. By including Watts Bar’s designer and fuel vendor, Westinghouse Electric Company, and its owner, the Tennessee Valley Authority, the consortium leverages industry expertise, as well as design and operating data from its partners.

“Most of the data is proprietary, so unless you have the partnerships, you’re not going to get the data to validate your code,” explained ORNL nuclear engineer Andrew Godfrey. “Not only do we do direct comparisons to measured data from the plant, but we also perform direct comparisons to the methods currently used for analyses. This is unique and invaluable to an R&D program.”

Unlike standard modeling tools used in the industry, VERA relies on supercomputers such as ORNL’s Titan and CASL partner computers—in this case the Falcon system at Idaho National Laboratory. The code sliced each of the reactor’s 51,000 fuel rods into more than 1,000 regions, as well as modeling other details of the core, such as control rods, burnable poisons, instrumentation and spacer grids.

In addition, VERA keeps up with different nuclides as they are created. The fuel starts out primarily with two isotopes of uranium: uranium-235, which fissions and creates energy, and uranium-238, which captures neutrons to produce other fissile fuel. Along the way, neutrons in the reactor split some nuclei and absorb into others, each time changing the nature of the nucleus. To simulate this process, VERA tracks 263 separate nuclides in 47 energy groups in over 8 million regions in the reactor core.

The benefit of high-performance computing is that VERA can model the reactor in far more detail than what is possible with existing industry tools. As a result, VERA holds the promise of providing information that is currently unavailable—such as when and where crud is likely to appear.

Crud forms when the fuel produces heat unevenly. Water boils along the higher-powered fuel rods, depositing nickel and iron and picking up boron, a strong neutron absorber, from the reactor coolant.  The location of the deposited boron can affect the distribution of power generation in the core, especially since more of the boiling occurs in the upper part of the core.

“Industry is very interested in our ability to simulate crud and its impact on reactor operation,” Gehin said. “This would greatly help them in optimizing the fuel loading and operations to decrease costs and reduce operational risk.

“This is complicated, because while we can show you the reactor core, you also have to look at corrosion of the steam generators, where the crud is coming from, and how it gets to the core. Then you have to look at how the core operates and whether it has localized boiling or not.”

If VERA can predict where crud will appear, plant designers can better understand how to avoid it. They can also save substantially on their fuel costs, as they are currently purchasing more fuel than is necessary to avoid excess buildup.

CASL will continue to model Watts Bar 1 as data becomes available and will model the startup of Watts Bar 2 in the coming year. The researchers are also working with Westinghouse to model a new plant design, the Westinghouse AP1000. The first of these new reactors is being built at China’s Sanmen Nuclear Power Plant. Four AP1000 reactors are under construction in the U.S. at the Vogtle Electric Generating Plant in Georgia and at the V.C. Summer Nuclear Generating Station in South Carolina.